”All the possible measures should have been used instead of waiting for the patient to bleed to death”, forensic expert doctor of doctor Davit Shahverdyan’s case was interrogated 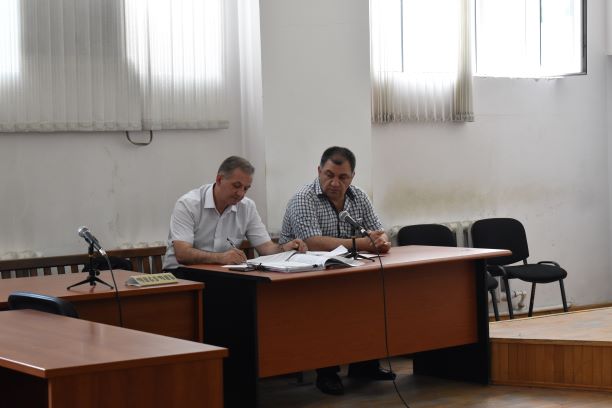 Yesterday, on April 25, 2019, in Lori region General Jurisdiction Court, Haykazn Chakhoyan (who was invited to the Court as the forensic expert doctor in the case of puerperant woman Hripsime Nazlukhanyan’s death) was interrogated. Haykazn Chakhoyan is a member of the commission that conducted forensic medical examination.

He was invited to the Court by the defendant party. First, defender Artak Voskanyan and defendant Davit Shahverdyan began asking the expert questions. An accusation had been filed against Davit Shahverdyan under Article 130 § 2 of the RA Criminal Code, i.e. failure to implement or improper implementation of professional duties which resulted in the patient’s death.

The interests of the victim’s successor are represented by Helsinki Citizens’ Assembly Vanadzor lawyer Ani Chatinyan.

While presenting his questions, defender Artak Voskanyan invoked a few handbooks at hand and claimed that Davit Shahverdyan’s actions were right and under such conditions laparotomy is not instructed. The expert, in his turn, replied that there are dozens of such handbooks and experts used them when giving an expert conclusion, but based it on the Clinical Guidelines approved by the Minister of Health, according to which in Hripsime Nazlukhanyan’s situation there was no alternative to laparotomy for two reasons –that way it would have been possible to either find the source of haemorrhage and stop it or remove the uterus. Davit Shahverdyan did neither of the above-mentioned for hours on end under the condition of continuous bleeding, as a result of which the puerperant woman lost a huge amount of blood and died.

H. Chakhoyan cited the relevant parts from the conclusion, presented the methods used and other details.

The expert was given questions by Davit Shahverdyan himself, who claimed that there was no uterine rupture, as the vagina rupture could not have reached the uterus, to which the expert counterclaimed and again cited the parts of the conclusion according to which it was recorded that the rupture of the uterine cervix had reached  the lower segment of the uterus, after which he invoked the results of the ultrasound examination, which showed blood clots in the uterus and the bleeding did not stop for hours on end.

The defendant claimed that under the condition of 60/20 pulse pressure laparotomy could have led to the loss of even more blood and in that case he would have been accused for taking that measure. The expert claimed with regard to the above-mentioned that in case of continuous bleeding laparotomy is instructed with parallel transfusion of blood and that all the measures should have been taken to save the patient’s life instead of waiting for her to bleed to death, given the fact that bleeding was continuous after the delivery.

The expert touched upon other actions of the doctor, as well, among which, he stated the fact that Davit Shahverdyan checked the uterine cavity with his hand without any anesthesia, “I cannot imagine how that woman endured that pain”.

It should be recorded that the expert had properly familiarized with the case materials, details of the expert conclusions and all the clinical guidelines and the instructions therein. The interrogation of the expert reconfirmed the hypothesis according to which after H. Nazlukhanyan’s delivery, D. Shahverdyan took no effective action to find out the cause of the bleeding, eliminate it and save her life.

The expert also mentioned that even under the condition of 60/20 pulse pressure, laparotomy in parallel with blood transfusion would have significantly contributed to the chances of saving the patient’s life.

The court session was postponed due to the end of the working day and was scheduled on May 17, 2019. The Court will continue hearing the expert.