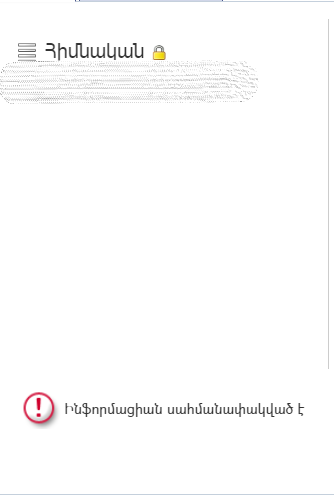 Helsinki Citizens’ Assembly Vanadzor undertook the protection of journalist Elmira Martirosyan’s rights. She is charged under Article 144 of the RA Criminal Code for publicizing in 1in.am media website information pertaining to personal and family life.

According to the accusation, in the frame of covering the court case, the journalist publicized information pertaining to personal and family life of a person involved in the court case. At the time when the publication was made, i.e. in November 2018, the case was being examined with open court hearings and the journalist publicized the information exclusively received during the court sessions and obtained from datalex.am webpage. Shortly after the publication was made, court case examination continued with closed court hearings and after that a crime report was made on publicizing confidential information.

Despite the fact that at the time of the publication the information was not confidential and the journalist’s actions could not have been prohibited by law, the body conducting the proceedings refused E. Martirosyan’s petition to discontinue the criminal case.

With the support of Helsinki Citizens’ Assembly Vanadzor, the journalist appealed the decision (dated August 14, 2019) of the body conducting the proceedings on refusing the petition to the RA Prosecutor General. The appeal underscored the condition that the journalist had collected and used information which was available to everyone and was not considered to be secret. The decision to examine the case with closed court hearings was made after that and in this case, the condition of intention and that of illegally collecting information are excluded.

It is obvious that that there is an intention to restrict the journalist’s freedom of speech by initiating a criminal case for publicizing legally obtained information and by qualifying the journalist’s actions illegal. Helsinki Citizens’ Assembly Vanadzor will pursue the protection of journalist E. Martirosyan’s rights.