As a result of 4-year judicial proceedings, HCA Vanadzor claim on compensation for non-pecuniary damage was upheld 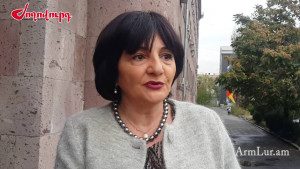 On December 24, 2019, RA Administrative Court partly upheld the claim made by Helsinki Citizens’ Assembly-Vanadzor on compensation for non-pecuniary damage inflicted on Susanna Simonyan.

In 2017, civil activist Susanna Simonyan was subjected to illegal actions by police. The protection of Simonyan’s interests was undertaken by Tatevik Siradeghyan, lawyer of the Representative Office of HCA Vanadzor in Yerevan. Tatevik Siradeghyan applied to the RA Administrative Court claiming to recognize illegal the policemen’s actions that had led to the violation of a number of her defendant’s rights.

It can be clearly seen in the video materials of the case how the policemen used violent force and injured the citizen’s shoulder by causing pain. As a result, Susanna Simonyan’s shoulder was completely injured. For two years on end she suffered pains and health state deteriorations. Samson Galstyan, lawyer in the Representative Office of HCA Vanadzor in Yerevan, went on to represent Susanna Simonyan’s interests. According to her, Mrs. Susanna suffered serious moral damage, which served as a basis to apply to the RA Administrative Court with a new claim of a compensation for non-pecuniary damage in the amount of AMD 547,870.

One of the substantiations of compensation for non-pecuniary damage is that the police, without any grounds, rejected the citizen’s claim instead of compensating, in a manner prescribed by law, for the damage inflicted through their illegal actions. This was the reason why Simonyan was obliged to litigate the refusal decision (which was an interfering administrative act by the legal department of the police) dated May 16, 2019, by Article 67 of the RA Administrative Procedure Code (1. The plaintiff can use the obliging claim to demand the adoption of the favorable administrative act, the adoption of which was rejected by the administrative body, 2. The obliging claim includes the demand to litigate the interfering legal act made by the administrative body as mentioned in part 1 of this Article).

Simonyan’s claim of a compensation for non-pecuniary damage was taken into proceedings by the Administrative Court on June 28, 2019 and the Ministry of Finances was involved as a third party; on September 17, 2019, a decision was made to examine the case.

In the claim, Samson Galstyan, lawyer of the HCA Vanadzor representative office in Yerevan, also invoked the European Convention for the Protection of Human Rights and Fundamental Freedoms and the RA Constitution, which guarantee the right to compensation for non-pecuniary damage in case of a violation of a right and oblige the states to safeguard, secure and protect those rights by their legislation.

Despite the term “an amount commensurate with the damage” used a lot during the judicial proceedings, the Court upheld the claim in part and set AMD 100,000 as a compensation.

Samson Galstyan, lawyer of HCA Vanadzor representative office in Yerevan, states, “From the point of view of compensation for moral damage, this can be considered as a small victory. Such cases will have a preventive role for the arbitrary actions of state bodies. It will make them realize that the moral damage inflicted on a person due to their illegal actions must be compensated for. Though the Court did not uphold our claim for non-pecuniary damage in full, experience shows that the amount of compensation keeps rising and later, besides invoking decisions of the Euroean Court, we will also have an opportunity to invoke judicial acts made by RA courts”.