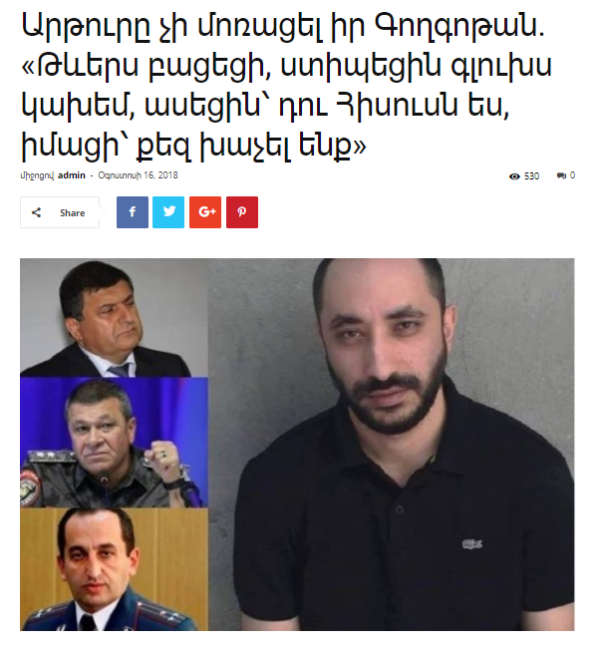 Artur Kocharyan | Activities | Legal Support | Legal Support | Right to Freedom from Torture | Project։ Stability of HCA Vanadzor in the light of democracy and human rights challenges in the Republic of Armenia 2019 | Project։ Combatting Torture and Ill Treatment in Georgia, Armenia and Ukraine | News

On November 9, 2018, HCA Vanadzor lawyer Ani Chatinyan applied to the RA Special Investigation Service investigator A. Avetisyan and claimed to attach to the criminal case based on the report made in 2005 within the framework of “Mataghis” case (and examined in Special Investigation Service)  the media material published in forrights.am news website titled “Artur has not forgotten his Golgotha, “I stretched aside my arms, they made me bow my head and said, you are Jesus, know, we have crucified you.”

Let us remind that after the European Court of Human Rights judgment on “Mataghis” case, A. Zalyan applied to the RA Cassation Court claiming to commnce judicial review proceedings. On April 12, 2017, Court of Cassation of the Republic of Armenia upheld the application and sent the case to a new examination.

Court of General Jurisdiction of Yerevan Kentron and Nork-Marash Administrative Districts assigned the RA Special Investigation Service to commence a new examination on the crime report made on December 12, 2005.

A criminal case was initiated under the RA Criminal Code Article 309 § 2 (exceeding official authorities committed with violence)  in the RA Special Investigation Service Department of examination of torture and crimes against humanity. Within its framework, Arayik Zalyan was recognized injured.

In the material published on firrights.am website on November 8, 2018, life-imprisoned convict Artur Kocharyan gives information about the crimes committed by military prosecutor Gagik Jhangiryan, who controls the criminal case initiated against Vladimir Gasparyan, former head of the Military Police Department of the RA Ministry of Defense; Armen Hakobyan, RA Police former head of the Department of Internal Security and A. Kocharyan. He mentioned that the above-mentioned 3 persons tortured him and made him give testimony.

Arayik Zalyan, the injured of the criminal case examined in the RA Special Investigation Service within the framework of “Mataghis” case, also mentioned in his testimony that he was tortured by the same Armen Hakobyan.

Taking this condition into account, after the publication of the material, on November 9, 2018, HCA Vanadzor lawyer A. Chatinyan applied to V. Avetisyan, deputy head of the RA Special Investigation Service Department of examination of torture and crimes against humanity, claiming to attach the news material to the examined criminal case and to resolve the joint process.

More than two months have passed, but the Special Investigation Service investigator still has not responded to the petition.