Study of the results of the elections of local self-government bodies on March 15, 2020 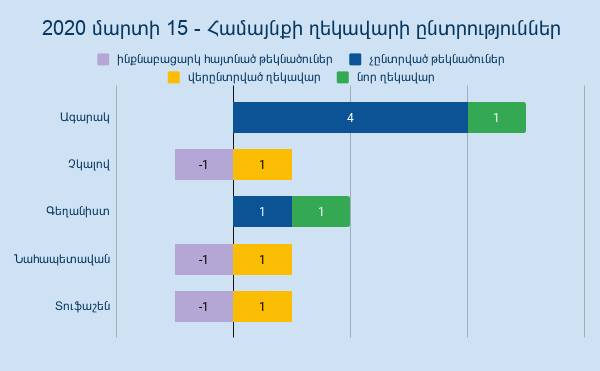 On March 15, community head elections were held in 3 communities of Shirak region, 1 community of Lori region and 1 community of Aragatsotn region. The Independent Observer did not have an opportunity to observe the voting process, however, it studied the election results. A total of 13 candidates were put up. All the candidates were self-nominated and non-partisan.

✅ Roman Shakaryan, elected as head of Lori region Chkalov community, was first elected as the community head in 2012. He was then a member of the Republican Party of Armenia. It should be mentioned that his two opponents were also members of the Republican Party of Armenia. It is noteworthy that Roman Shakaryan’s wife was elected as a member of the council of elders with the most votes in Chkalov community Council of Elders elections of December 2019.

✅Shirak region Tufashen community head Artak Yegoryan was first put up as a candidate and elected in snap elections in 2012. In 2015, A.Yegoryan was reelected without electoral competition. In 2012 and 2015, A. Yegoryan participated in the elections being a member of the Republican Party of Armenia and in 2020, he was put up as  non-partisan.

Shirak region Geghanist community was factually the only one where the community head had an opponent and was not reelected. Aghasi Ghazaryan, the former head of this community, was first elected in 2005 and was non-partisan. Aghasi Ghazaryan was reelected in 2007, 2012 and 2015, and was put up in all these elections as non-partisan and had opponents. During the elections held in March 2020, Senik Martirosyan (put up as a candidate for the first time) was elected.

✅There should be a restriction regarding the times a candidate can be nominated in order to provide real competition in community head elections.

✅Before passing to proportional election system on the community level, it is necessary to study, assess and determine the sustainability of multi-party system on local level, the possibility and capacity of the involvement of parties, in order to exclude party affiliation of local self-government bodies based on political expediency, which, leading to a single party affiliation on the level of council of elders and community head, may disrupt the logic of self-government and generate dangers of abuse of administrative resources.

CSP Working Group on the Fight against Torture developed torture prohibition indices for eight countries. Armenia is among them

On participation of A. Razgildeyev, serviceman of the Russian military base located in Gyumri, in the court session on the case of J. Ghukasyan’s death