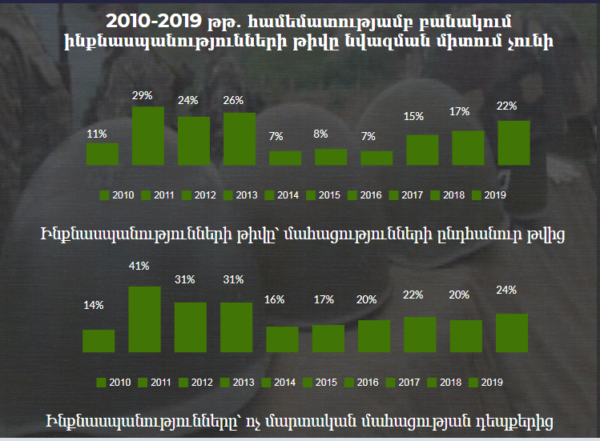 On November 11, 2019, during the conversation with journalists, RA Deputy Minister of Defence Gabriel Balayan announced that the number of suicides in the armed forces tends to decrease yearwise.

G. Balayan made this claim in reaction to a journalist’s observation that in 2018, as compared to 2017, there was an increase recorded in the number of suicides in the armed forces. Deputy Minister opposed the journalist, “You are wrong, if the dynamics has not remained on the same level, it has not increased, either”.

According to monitoring results, since 2010, relatively small numbers of suicide cases in the armed forces were recorded only in 2013-2015, however, we cannot say that the number of suicide cases tends to decrease.

On November 19, 2019, in the frame of discussing the proposal of making changes in the RA Criminal and Criminal Procedure Codes, RA NA deputy Kristine Poghosyan also touched upon the number of death cases in the army. The deputy mentioned it in the context of criminal subculture influence in the army.

Below you can find the results of the study by HCA Vanadzor by years. 2019 data are presented as of November 11.

The number of suicides is presented in percentage ratio for each year separately for the total number of deaths and the number of non-combat deaths. 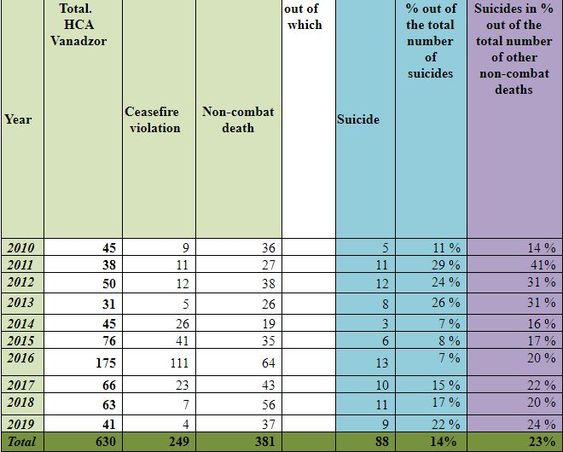 The RF Defense Ministry claims security guarantees for A. Razgildeyev