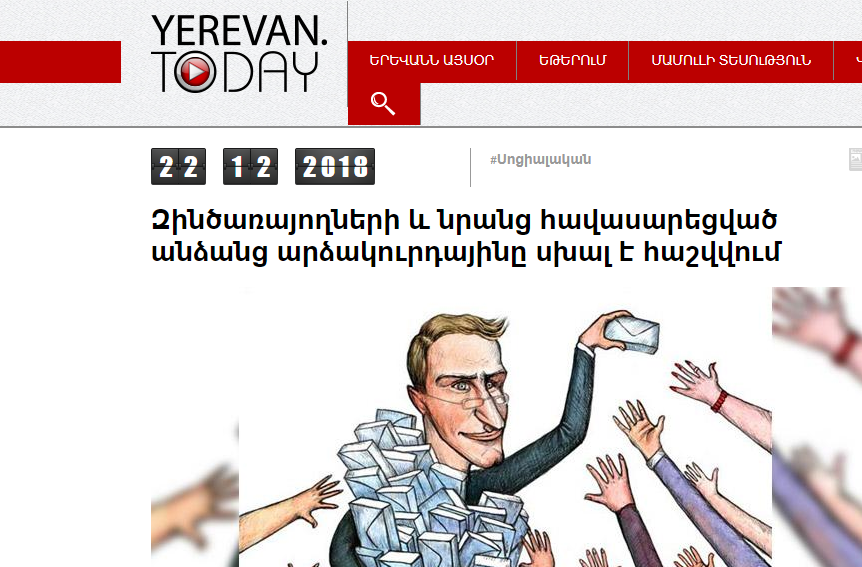 In this material, it is mentioned that for years on end, servicemen’s holiday payments have been incorrectly calculated and Article 169 of the RA Labor Code has been violated.

In accordance with Article 32 of the RA Law “On social security of the servicemen and their family members”, servicemen’s holiday duration is 30-45 days in compliance with the service years (without clarifying whether those are working or calendar days). As holiday payment, servicemen were in fact paid their main salary, which amounted to less than their annual holiday pay. Whereas in compliance with the Labor Code, holiday days should be multiplied by average daily salary.

On December 16, 2017, this Article was revoked. In the amended law, the number of holiday days was reduced and “calendar day” formulation was added. Nevertheless, no attention was drawn to the condition that before the amendment to the law, the servicemen had received less holiday payment than prescribed by law. If we take into consideration the fact that this money was calculated in the state budget and transferred to the institutions but did not reach  the addressees, it becomes apparent that corruption-related abuses took place.

Based on yerevan.today publication HCA Vanadzor submitted a crime report to the RA Prosecutor General’s Office back in March 2019.

L. Yeghoyan, PIC investigator of the RA Investigative Committee, obtained clarifications from V. Aperyan, head of MoD Financial-Budgeting and Planning Department, and S. Simonyan, head of MoD Legal Department, who claimed that when calculating servicemen’s holiday payments, laws regulating state service types were used and not the Labor Code. Based on the data received, the investigator concluded that there were no falsifications in official documents, did not record swindling conditions, either, and decided not to initiate a criminal case.

Regarding the claim that while calculating the servicemen’s holiday payments, Labor Code should not be used, but rather, the relevant laws, HCA Vanadzor argued that in the law mentioned by the officials, the legal relations pertaining to the annual holiday payment of state officials were not mentioned as a subject of law regulation, therefore, Labor Code should be applied.

With respect to the body conducting the proceedings not finding any falsifications in the official documents, the appeal drew attention to the condition that there was no information stating that the investigator had seized the documents and checked them and made the decision based only on these actions.

It is obvious that objective and comprehensive investigation was not conducted.

Besides, the crime report was on the possible commission of crime by persons delivering state service and in this case, investigation is conducted by the RA Special Investigation Service.

On May 2, 2019, the RA Central Military Prosecutor’s Office considered the actions of the body conducting the proceedings grounded and refused the complaint. Furthermore, RA Central Military Prosecutor’s Office considered the matter of the legal act subject to application out of criminal proceedings domain. The latter also did not see any necessity to examine the documents and transfer the case to the RA Special Investigation Service.