The Armenian army is 28 years old: what problems we have recorded as a result of monitoring over years 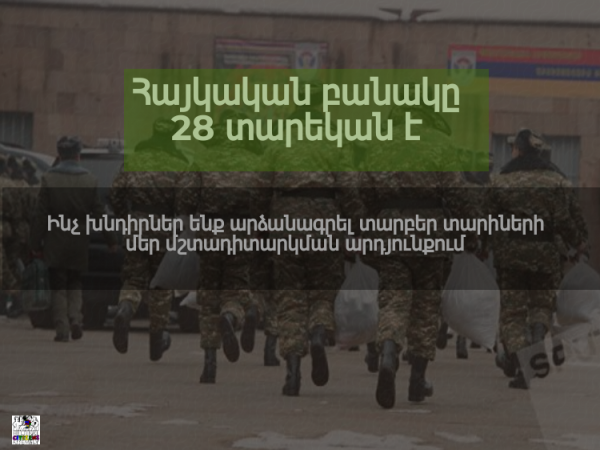 Today we are celebrating the 28th anniversary of the formation of the RA armed forces.

28 years ago, the Armenian army was established as a guarantor of securing the territorial integrity, security and protection of the citizens of a sovereign state.

We also join in the congratulations and wish servicemen a safe, peaceful and dignified service.

Helsinki Citizens’ Assembly-Vanadzor has been monitoring human rights in the armed forces since 2008 and throughout these years we have recorded a number of problems. Some of them were solved, however, a great number of the important problems recorded remain problematic.

We tried to sum up all the problems recorded by us, in particular, the ones regarding call-ups, as well as recommendations presented by us for their solution, and to understand which recommendations have been presented in our reports for years on end and which of them are still unsolved, which are not up-to-date anymore.

Initially, we recorded the lack of mechanisms of civil and public oversight over call-ups and military service, conduction of medical examinations during call-ups, problems regarding the conscription of persons with dual citizenship, discrimination in the process of granting a deferral.

It is noteworthy that some problems recorded 12 years ago are still up-to-date today.

If we compare recommendation lists presented in different years, we can record that most of them have been presented for a few years already and have still not been accepted.

Though certain improvements have taken place, there are still a number of important recommendations that have been up-to-date since 2008. They are presented in our report “On the state of the rights of conscripts during winter 2018 and summer 2019 call-ups”.

1․ Provide quality examination of conscripts referred from distant residence places in a short timeframe within the same day, if there is no need for additional measures based on the complexity of the disease.

2․ Provide conscripts and the persons who accompany them with sufficient financial means to cover all the expenses of transportation in case of being referred to medical institutions, and staying overnight in the capital, if necessary.

3․ Make the following changes in the RA Government’s 404-N decision,

4․ After granting a deferral for treatment, provide the conscript’s treatment by determining a precise procedure.

5․ Determine assessment mechanisms  and legal grounds of military service conscription by taking into consideration the simultaneous existence of two and more diseases and its influence on one’s health state in case of being overloaded. Adopt the same approach for servicemen considering the acquisition of the fifth disease during the military service as a basis to review the serviceman’s fitness for military service.

6․ Make the assessment of international higher educational institutions operating in the RA consistent with the RA legislation by establishing a unified assessment system in the RA.

Regarding the problems related to law enforcement practice

Regarding the problems pertaining to the right of getting information