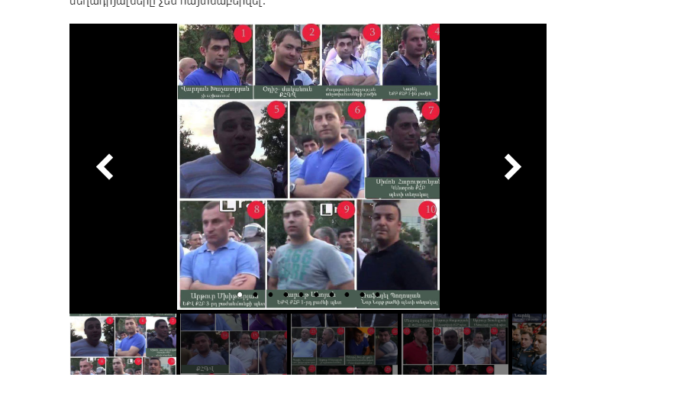 On April 23, 2019, based on the publication by Epress.am news website, the crime report made by HCA Vanadzor was attached to the criminal case regarding “Electric Yerevan” which is examined in the Special Investigation Service.

Helsinki Citizens’ Assembly Vanadzor Chairman Artur Sakunts was informed about this by V. Avetisyan - Deputy Head of Investigation Department of Tortures and Crimes against Person of the RA Special Investigation Service.

In the publication titled “Most of those accused within the framework of Electric Yerevan and considered “lost” have been promoted to high positions” dated March 12, 2019, Epress.am presented photos of 39 plainclothes detectives who applied violence to the participants of the protest against the increase of electricity tariff on the night between June 22 and June 23, 2015. The names of some of them are also known. According to the news website, some of them were awarded after the incident, while others were promoted to higher positions.

In the crime report addressed to the RA Prosecutor General A. Davtyan, HCA Vanadzor also invoked videos published on Lragir.am news website, in which it can be seen how plainclothes policemen apprehend peaceful protesters by applying violence in compliance with a specially developed plan.

Those plainclothes policemen were operating in a coordinated way and by cooperation with each other, which means that they acted by the order of an officer.

By the crime report addressed to the Prosecutor General, Helsinki Citizens’ Assembly Vanadzor claimed to discover and bring to criminal liability the officer who ordered to apprehend peaceful protesters by applying violence.

The RA Prosecutor General’s Office sent the report to the RA Special Investigation Service, where the report was attached to the already initiated criminal case.