On the destruction of the Armenian cultural heritage in Artsakh 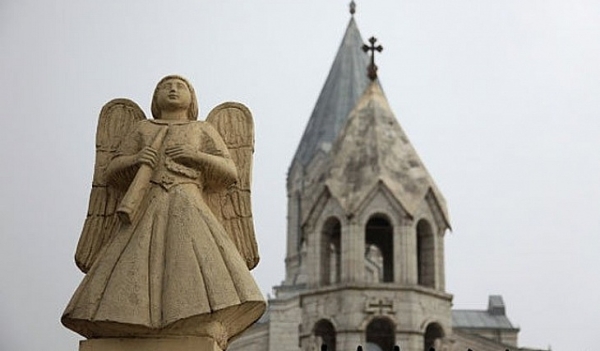 On February 3, 2022, it became known from Azerbaijani and international sources that the Azerbaijani government had formed a "working group of Alban historians and architects" with the task was to remove "fake Armenian traces" from Alban architectural monuments. It is obvious that this action is aimed at the elimination of the Armenian cultural heritage in the territory of Artsakh, as a result of which the basis for the demands of the Armenians of Artsakh to live in their own land as well as the protection of their rights will be questioned.

In this context, it is important to mention  that in 2005 the Azerbaijani authorities destroyed the Armenian cemetery in the city of Jugha in Nakhichevan with its thousands of valuable khachkars. They were displaced and broken by the use of construction equipment and thereby used as construction material, while the vacated area of the cemetery was turned into a military school. Thus, the Azerbaijani authorities have proven that they are capable of pursuing their policy of ethnic cleansing by destroying Armenian historical traces.

The UN International Court of Justice with its decision of December 7, 2021 on the application of interim measures in the case of Armenia v. Azerbaijan has demanded that Azerbaijan take all necessary measures to prevent and punish  all acts of vandalism against the Armenian cultural heritage, including churches, other places of worship, monuments, nature sites, cemeteries and other artifacts. By its current actions, Azerbaijan is violating this decision, proving its determination to complete the work it has begun.

Unfortunately, the regular anti-Armenian rhetoric of Aliev, the president of Azerbaijan and the policy of unhidden ethnic cleansing and cultural genocide do not receive a proper response from the authorities of the Republic of Armenia. The latter's positions often do not correspond to the challenges of the fatal situation related to the violations of the sovereignty and security of Armenia as well the human rights of the people of Armenia and Artsakh.

WE DEMAND from the RA Prime Minister and from the Government (in particular, the RA Ministry of Foreign Affairs and the Ministry of Education, Science, Culture and Sports):

1. Notify the UN International Court of Justice of the actions taken by the Azerbaijani authorities to eliminate the Armenian cultural heritage for non-compliance / violation of the interim measure applied in the case of Armenia v. Azerbaijan, if necessary, to request additional measures to prevent the planned crimes and the irreversible loss of the Armenian cultural heritage.

2. Apply to relevant UN bodies, including UNESCO (including acting as a member of the UNESCO General Council) and Special Rapporteur on Cultural Affairs, arrange a visit to Artsakh and to observe and document the current state of Armenian monuments.

Protection of Rights Without Borders NGO

Hrachya Arzumanyan, Expert in the field of security