The lawyer alarms, the defendant is under illegal detention in “Vanadzor” penitentiary institution 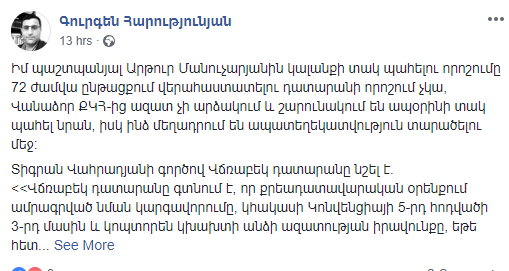 Gurgen Harutyunyan – member of the RA Chamber of Advocates – alarms in his Facebook account that his defendant Artur Manuchayan is under illegal detention in Vanadzor penitentiary institution.

Within the framework of hearings of the criminal case initiated against him back in 2013, Artur Manucharyan did not appear before the court during the court sessions. In 2014, on the basis of avoiding examination, the court replaced the preventive measure of signature on not leaving with detention and declared him wanted.

“Zvartnots” airport linear division police officers took wanted Artur Manucharyan upon his arrival at the Republic of Armenia at around 4 a.m. on February 7, 2019. He was then transferred to the RA Police Alaverdi division and then to “Vanadzor” penitentiary institution.

Whereas, the Court took the decision on detaining him 5 years ago, on January 14, 2014, and in case of discovering wanted A. Manucharyan, transferring him to Vanadzor penitentiary institution  without the court’s decision is a violation of a person’s right to freedom enshrined in the European Convention of Human Rights.

In the frame of an application filed with the ECtHR, the RA Government admitted that there were no sufficient grounds for detention and proposed a compensation for the damage caused

Probation Service and Penitentiary Service found, for unclear reasons, that the early release of the convict would be inexpedient