Words of Freedom, Portraits of Hope 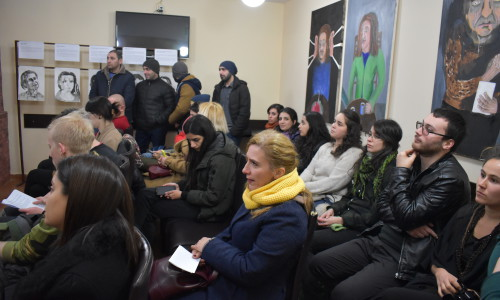 It was words of freedom that were being spoken last night in Vanadzor’s Jazz Café, on December 14th, 2017. Beautifully wrapped into a theatre play, Eva Jašková, EVS volunteer at Helsinki Citizens’ Assembly Vanadzor Office, addressed the right to freedom of opinion and expression by incorporating texts of imprisoned writers Tal Al-Mallouhi (Syria), Faraj Ahmad Birqdar (Syria) and Sepideh Jodeyri (Iran) into Jack London’s renowned novel Star Rover and created an outstanding performance, raising awareness about the issue of prisoners of conscience. The performance was performed by Hrachuhi Loretsyan and Susie Hakhoyan, students at Yerevan State Institute of Theater and Cinematography Vanadzor Branch.

The unjust imprisonment or harassment of writers and journalists, voicing their opinion and resisting the repression of their right to freedom of speech, is a widespread human rights violation, which is why the play was followed by an invitation to take part in the writing of letters in support of this year’s selected imprisoned writers. The audience was able to read through the five cases chosen by PEN International’s Writers in Prison Committee and write letters to show their support for the prisoners.

The possible writers to support were:

As HCAV is currently running a book collection, in order to enhance the number of foreign language books in Armenian prisons, a collection box for people to drop off books was installed, as well. Visitors were able to bring books for the book collection and through this help expand the stock of prison libraries.

In addition to the play, the evening was accompanied by the opening of Eva Jašková’s exhibition of portraits on the topic of Missing Persons, one of the most pressing issues currently affecting Armenia. Due to the Karabakh conflict, the number of missing soldiers is high and the families being left behind suffer from ambiguous loss. Not knowing whether their loved ones are still alive or already perished, they have no possibility to grief properly and are in a constant state of waiting without receiving an answer.  As up to date, there is no established law on this issue, which would improve the situation of those affected and provide aid to families.

In a letter of August 4, 2015 in response to the inquiry by Helsinki Citizens' Assembly Vanadzor, the RA Ministry of Justice ruled the adoption of the draft law not urgent.

With her six mesmerizing painting, Eva Jašková was not only able to show the emotions and hardships of these affected families, but also gave them hope by portraying how life will be when peace eventually also makes its way into their homes. The art works will remain in Jazz Café for the next few days and visitors are welcome any time.