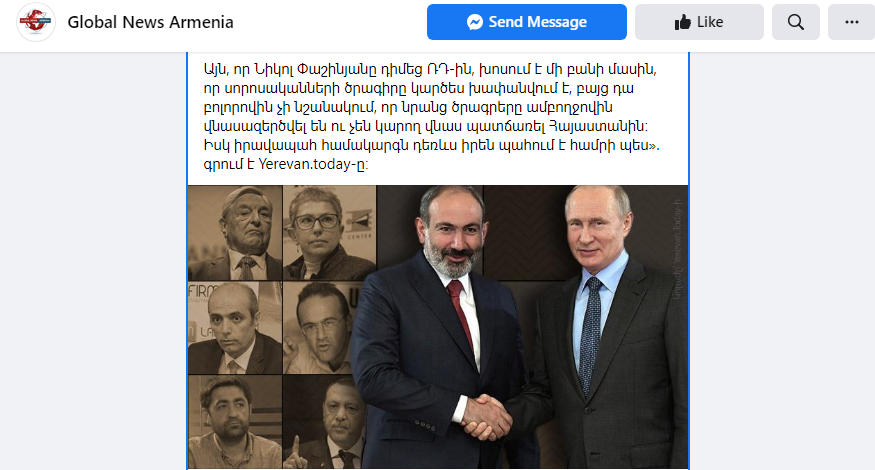 Especially after the 2018 Velvet Revolution, groups sponsored by the former government began with greater vigor to organize various actions, accompanied by hatred and threats of violence, against human rights activists, human rights organizations and Open Society Foundations backing their activity. They have been aiming to disrupt, hinder democracy restoration processes in Armenia, continuing the actions of devaluing democracy and human rights, used since the times of their rule.

By the way, civil society organizations were targeted based on the condition whether they had or had not supported former state capturers: they were targeting those who had not supported them. All this was done in the conditions of the silence and inaction of the authorities. Due to their inconsistent and unprincipled stance, the authorities themselves manifested inaction with regards to speech and actions of hate, enmity, physical threats and retribution, viewing them as manifestations typical of a democratic state and society. In reality, however, those very actions were and are anti-democratic, as well as undermining the principle of the rule of law.

It should be recorded that the state manifested segmental, selective, non-systemic approaches in the processes of implementing radical changes necessary for the transfer from state capture to a democratic state governed by the rule of law. These approaches contributed to such non-punishable ways of acting of such extremist, anti-democratic groups, as a result of which, human rights and their protection were subjected to unimaginable attacks. Moreover, bowing to various manipulations, statements and comments in line with these very extremist groups’ rhetoric were spoken at the highest level of the authorities.

During the war unleashed on 27 September 2020 by Azerbaijan against Artsakh, and especially after the hostilities ceased, attacks against human rights activists and non-governmental organizations intensified on social networks. They were manifested by a direct intrusion into the office of Open Society Foundations-Armenia on the evening of November 9, as well as an attack on HCA Vanadzor office by a citizen. All this was accompanied by the use of various conspiracy theories, obviously false, trumped-up accusations, hate speech, enmity. Some of the targeting cases contained hate speech and prima facie elements of other actions subject to be criminally prosecuted. Thus, to have the relevant process launched in accordance with the aforementioned, HCA Vanadzor applied to law enforcement bodies.

Below we present the picture per each case and report.

1.On 9 October 2020, Facebook user Narek Malyan shared on his page HCA Vanadzor announcement on collecting data of missing servicemen and captioned it, “I am calling the NSS’s attention: under the guise of human rights activity, Soros organizations collect information on Armenian servicemen. I think it goes without saying where the collected information may appear.#death_to_traitors”.

Based on this post, on October 13, HCA Vanadzor made a crime report to the RA Prosecutor General’s Office. The Prosecutor’s Office sent the report to Police, which refused to initiate a criminal case. The decision was not reviewed by the Prosecutor’s Office, either. The law enforcement bodies did not consider Narek Malyan’s threats real and considered the call for #death_to_traitors as abstract. It is noteworthy that in the decision on refusing to initiate a criminal case, it is noted that N. Malyan did not respond to written and oral notifications on giving explanations and did not go to the Police.

HCA Vanadzor will appeal this decision in Court.

2. The next post, based on which a crime report was presented, was made by Global News Armenia Facebook page by reposting yerevan.today’s material entitled “Who was against Pashinyan appealing to Russia?”.

In particular, the page shared the following part, “This is about those subsisting on the money of George Soros foundation, i.e., the wing called human rights protection, the public wing headed by Larisa Minasyan with Sakunts-Barseghyan-Kharatyan circles. Though, homeland should have been above personal issues now. And why are the famous Soros people against? At this difficult moment when the enemy is bombing Syunik, Gegharkunik province border communities, why are Soros people against it?”. Under this post, other users made comments harming the organization’s and persons’ rights and legal interests. Despite the available evidence, no criminal case was initiated based on the report on these publications.

The appeal of the decision is underway.

All this was video recorded by the cameras installed at the area and presented to law enforcement bodies.

The Police concluded that the property damage caused to the Organization is not considered significant in terms of the relevant provision of the Criminal Code, therefore, according to the police, the citizen’s action did not contain corpus delicti. The Police did not consider the action of the citizen who made the attack to be hooliganism and refused to initiate a criminal case.

We will also appeal this decision.

4. On December 12, a video material entitled “The entrance to Soros office in Armenia got painted in red, symbolizing the blood of those killed in war” was published on Telegram channel of Mediareport and on Panorama.am Facebook page. In the video, Narek Malyan, in the presence of a group of people and a few representatives of the RA Police, throws red paint on the entrance of “Open Society Foundations-Armenia”Yerevan office, in the meantime saying the following expressions, “... Every time they visit this office, they should go burbling through this blood and understand that they will earn their pitiful dollars by going through this blood. (...) And their responsibility will take place in just a few days, in just a few days, and in the strictest way. In a few days. I promise you. As you know, I never promise anything that does not happen. (...) Right through this blood you will go every day to get your dirty grants. I will dedicate all my life and activity to calling for the responsibility of fouls like you, to cull you, death to traitor”. In response, the crowd begins to chant the expression “death to traitors”.

There is no decision regarding the crime report made on this incident yet.

If we consider the process of these reports and the attitude of law enforcement bodies to other cases, in particular, in the context of the actions of law enforcement bodies aimed at human rights activist Sashik Sultanyan, we will see an obviously differentiated approach. In his interview given to a Yezidi language website operating in Iraq, Sashik Sultanyan presented his views on the violations of rights of RA citizens of Yezidi nation. Let us remind that the NSS initiated a criminal case against Sashik Sultanyan based on the report by Narek Malyan, representative of the very group spreading hatred, enmity and threats.

The NSS Investigation Department initiated a criminal case by qualifying the presentation of the human rights defender’s opinion on human rights violations as “actions aimed at the incitement of national, racial or religious hatred, at racial superiority or humiliation of national dignity”.

Factually, in one case, when clear evidence is available, the facts of the attack are audio and video recorded, the authors of the preceding and following comments and posts of hatred, enmity and physical retribution are known, law enforcement bodies consider them abstract and not containing real threat, while they consider Sashik Sultanyan’s expressed opinion a basis on which to conduct criminal prosecution and initiate a criminal case.