Statement on the process of amending the Constitution 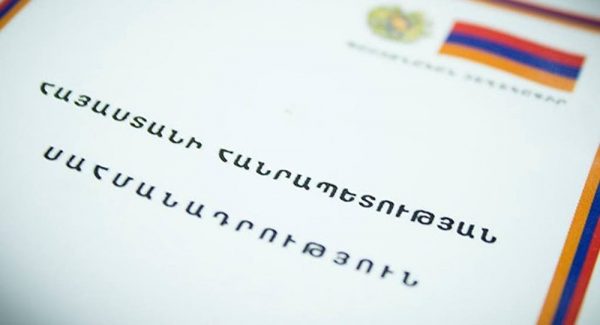 The peaceful and non-violent decentric mass protests of Armenian citizens throughout the country in April and May 2018 resulted in the Velvet Revolution, putting an end to the ongoing state capture. Snap elections to the National Assembly took place in December 2018, which local and international observers found to be fully in line with the international standards, and democratic, free, and fair. The legitimate government formed as a result of those elections bears political responsibility for restoring the constitutional order based on democracy and the rule of law and for safeguarding against the state capture.

In spite of the public demand, it took the Government until early 2020 to embark upon drafting a Constitution based on democracy and the rule of law: at that time, the Prime Minister decreed to create a Specialized Commission for Constitutional Reforms. Although the drafting of a new Constitution is presented as only one possible outcome of the work of the Specialized Commission, we believe that the constitutional reforms process in principle cannot be another set of changes to the current Constitution, but rather, must lead to the adoption of a new Constitution, because the adoption and amendment process of the current Constitution, as well as its substance, have never expressed the genuine will of Armenia’s citizens, rather being imposed on them with a view to catering to the political interests of the then incumbent.

The whole process of reforming the Constitution worryingly lacks transparency. Only scarce information on the concepts elaborated by the Specialized Commission is available to the public, which is not in any way contributing to either the credibility of the Commission, the process and the outcome of this process, or the meaningful participation of the public therein. In the absence of an articulate concept for the new Constitution, the Specialized Commission has inadvertently turned into a closed-doors forum for political debates and interest advocacy. Moreover, in the absence of a common vision, the Commission’s efforts of elaborating fragmented concepts regarding various state institutions leaves much uncertainty as to the eventual purpose of the amendments and their systemic integrity.

To break the vicious cycle of implementing constitutional mechanisms only to reproduce the incumbent power, efforts are needed to make sure that the process of developing the concept of a new constitution is public, participatory, transparent, and; an open platform for information sharing and discussion should be created, before turning to the drafting of a new Constitution. Armenia’s citizens must have fully-fledged and meaningful participation in drafting “the mother of all the laws,” and their vote must represent a substantive choice, irrespective of their approval or disapproval of the incumbent power.

The political force that came to power as a result of the Velvet Revolution bears direct political responsibility for securing the adoption of a new Constitution in the shortest possible time-frame, that will prevent state capture and achieve the separation of powers and checks and balances between the branches of power. Moreover, a new Constitution elaborated without such a value-based foundation and a participatory process will fail to address the main reason for the Revolution—the lack of constitutional safeguards preventing another capture of the state.

In view of the foregoing, we believe that the drafting of an Armenian Constitution based on democracy and the rule of law requires:

1.Revising the Prime Minister’s decree to create a Specialized Commission for Constitutional Reforms in order to prescribe the drafting of a new Constitution as a specific objective thereof;

2.Diagnosing the issues in the current Constitution and the mechanisms that contributed to the state capture, encroachments upon the constitutional order and the disruption of the independence of the judiciary, so as to avoid them in the new Constitution and to introduce additional safeguards;

3.Specifically prescribing the values to guide the draft of the new Constitution and the vision with respect to the separation of powers, checks and balances, the rule of law, independence of the judiciary, a secular state, effective parliamentary oversight, local self-government and direct democracy, respect for human rights, and other fundamental issues;

4.Ensuring the transparency of the whole process of constitutional reforms, including access to and publicity of conceptual documents, participatory discussions, and the possibility of making interim decisions; and

5.Ensuring that the referendum to adopt a new Constitution is held within a reasonably short time period, no later than the first half of 2022, so that the next election of the National Assembly is properly organized and conducted in accordance with the principles and provisions enshrined in the new Constitution.

The new Constitution shall become a new social contract between the state and the citizens, thus, the process of the adoption of it shall be invulnerable, and the document shall be acceptable and not be subject to change by any new political force.