G. Okoyev also corroborated that doctor Shahverdyan should have removed the uterus in order to save the puerperant’s life 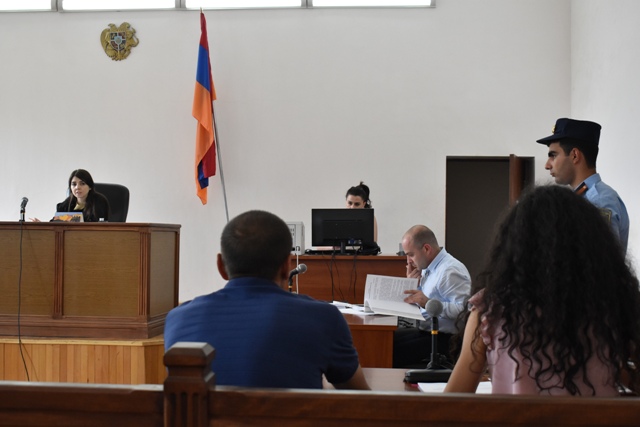 On July 2, 2019, forensic doctor – gynecologist G. Okoyev was interrogated in Lori region General Jurisdiction Court in the frame of the case of doctor Davit Shahverdyan accused of the death of the puerperant from Vanadzor.

He was invited to the Court through the petition made by the defendant D. Shahverdyan and hs defender A. Voskanyan. They mentioned that expert H. Chakhoyan, who had been interrogated earlier, did not answer narrow professional questions and hence they found it necessary to interrogate a narrow specialist.

The representative of the victim’s successor, HCA Vanadzor lawyer Ani Chatinyan had objected to the petition stating that expert Haykazn Chakhoyan had given comprehensive answers, she also reminded the Court about the obligation to examine the case within a reasonable timeframe.

Nevertheless, the Court upheld the petition and invited the forensic doctor-gynecologist to be interrogated.

Since G. Okoyev had received the notice sent by the Court late and had not had an opportunity to study the expert conclusion given around two years before, he first asked for time to do it.

First, defendant D. Shahverdyan gave questions. His questions concerned the recorded ruptures and their clinical manifestations, the nature of bleeding and the actions that a doctor is supposed to take in that situation.

Answering the questions, the expert mentioned that if the rupture of the uterine cervix had reached  the lower uterine segment, then it had gone through the whole cervix and reached the last stage. He then reaffirmed the statement made by expert Haykazn Chakhoyan - interrogated during the previous court sessions – that without removing the uterine, blood transfusion was an ultimate goal.  “You might fill the blood from one side and it will leave from the other side, it won’t work”, the expert mentioned.

Although according to the expert the situation was catastrophic and there were many sources of bleeding, he mentioned that first of all, everything envisaged by the guidebook had to be done. G. Okoyev did not deny that doctor D. Shahverdyan had taken certain actions, but they were not targeted.  “Suturing does not mean that bleeding will stop, the vessel might not be sutured”.

According to G. Okoyev, in order to prevent acute loss of blood, the surgeon would perform laparotomy a little earlier. “He had to catch the moment when after the stable condition, the pressure and heart rate began to drop”.

In response to the clarifying questions of the Court and the accusing prosecutor, the expert affirmed that in case all the measures proved ineffective and the bleeding did not stop, the only resort was the removal of the uterus, which would have considerably reduced the extent of blood loss and  increased the likelihood of saving the puerperant’s life.