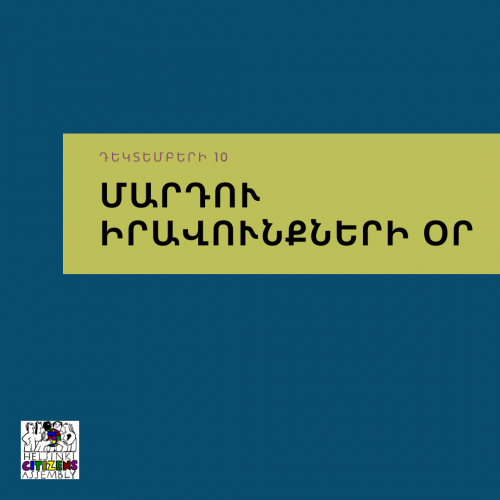 On 10 December 1948, during the 3rd session of the UN General Assembly, the Universal Declaration of Human Rights was adopted. The Declaration has been translated into 375 languages and dialects. It is the first global definition of human rights.  In 1950, the UN declared December 10 as the Human Rights Day.

The Universal Declaration of Human Rights was formed as a result of the analysis of the reasons and consequences of the preceding two world wars. The international community enshrined that wars are caused by the lack of proper respect to human dignity and lack of responsibility of states.

For more than 80 years since the adoption of the Declaration, the international community has been making efforts to develop effective mechanisms to prevent threats to human rights.  Nevertheless, many member states still do not make proper efforts to secure the principles set out in the Declaration of Human Rights.

Wars and pandemics still remain as threats to human rights. These threats were more strikingly manifested by the spread of COVID-19 pandemic in 2020. Besides COVID-19 pandemic, the war unleashed against Artsakh/Nagorno-Karabakh by Azerbaijan with public support of Turkey and involvement of mercenary terrorists was also a serious threat to Armenia and Armenian people.

It was a war that entailed human tragedies and a humanitarian crisis in Armenia and Artsakh.

Earlier, we published separate reports and publications on the situation in Armenia caused by COVID-19 and the related human rights protection challenges, state obligations and the state of their implementation.

We also made separate publications and joint statements with our partners to touch upon the state of the fulfillment of the Armenian authorities’ obligations to citizens in the conditions of security and humanitarian crisis caused by the war.

The improper resistance to human rights challenges and threats caused by the crisis is entailed by the continuous non-fulfillment of obligations undertaken by the state and the lack of the necessary effective institutional, legislative, economic, and other security systems. For years on end, the authorities did not make consistent and principled efforts to fulfill the obligations undertaken by the state.

For years on end, civil society organizations have presented numerous recommendations aimed at the development and strengthening of mechanisms of human rights protection by the state, and ultimately, proper implementation of the obligations undertaken by the state.

In terms of getting out of the created crisis situation, a list of the most urgent actions has also beenpresented. These are the actions to be taken as soon as possible in order to overcome the humanitarian crisis caused by the 44-day war, to create effective mechanisms to protect citizens’ rights and to overcome the security crisis of the state.

It is with regret that we should record that the state does not properly implement the undertaken obligations.

The state is not consistent both in preventing and giving proper assessment to the actions aimed at distorting, falsifying and devaluing human rights and democratic values after the 2018 Velvet Revolution and particularly after the ceasefire of hostilities, as well as in implementation of the undertaken obligations to secure and guarantee human rights activity.

We qualify such actions as imminent threats to the democratic security and sovereignty of the Republic of Armenia, the prevention of which is the state’s obligation.

In the created crisis situation, the RA authorities must implement their obligations to secure and guarantee human rights protection, in particular, the rights of representatives of vulnerable groups and citizens who appeared in grave living conditions.

Adequately respond to and prevent attempts to devalue the fundamental principle of security of the Republic of Armenia, i.e., human rights, as well as attempts to target organizations and individuals engaged in the protection of human rights.