“Corruption will be eradicated at the point where accountability and transparency become common. The right of demand is the only driving force of reforming the sphere of education”. Anti-corruption strategy discussion 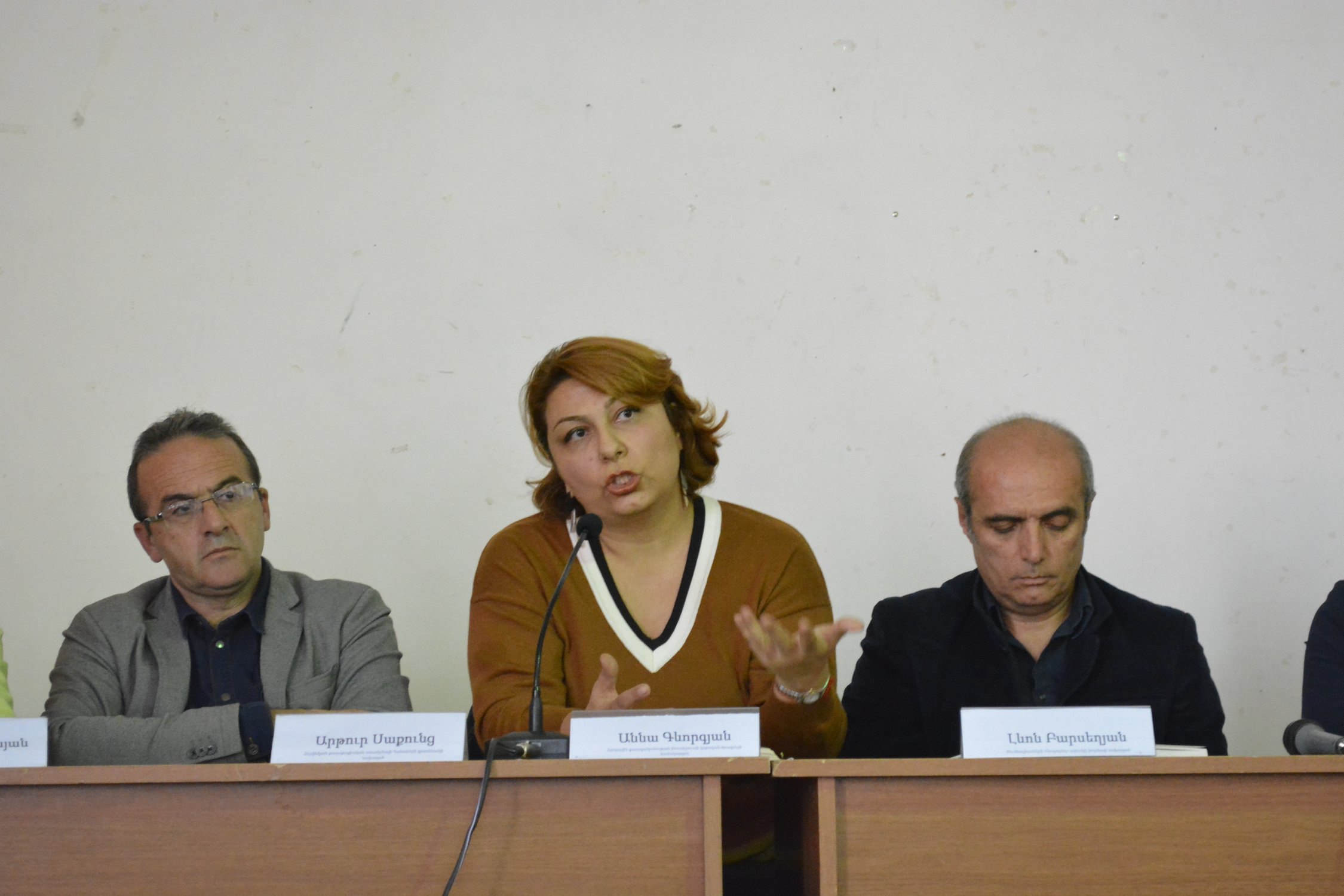 On October 3, 2019, the RA Government adopted 2019-2022 fourth anti-corruption strategic project. Certain steps in the project are envisaged for the sphere of education.

“Anti-corruption strategy: how to eradicate corruption from the sphere of education” discussion was invited in Vanadzor State University. The discussion was dedicated to the strategy and corruption issues in the environment of higher educational institutions in the post-revolutionary period.

Welcoming those present, Artur Sakunts expressed his hope that people in the hall had come to the meeting without being obliged to do so. He then sincerely stated that it was his first opportunity to have such a discussion at VSU, because before that he had been considered an undesirable person at such structures. He had had many meetings in Shirak State University. He was hopeful that the meetings in VSU would be continuous, too. As Artur Sakunts stated, numbering the strategies was not right, especially given the fact that the content of the new one was the result of the post-revolution period and it would not be right to consider it on the same level with the previous ones. The previous ones were written and remained on paper. “Number one condition of overcoming corruption is the existence of political will, do the authorities strive to overcome corruption? We have a comprehensive document aimed at the eradication of corruption-ridden way of thinking. However, the government alone cannot overcome it, there is a need for a public demand of overcoming corruption”, Artur Sakunts mentioned.  At the same time, he stated his concern pertaining to the matter whether the new strategy would give answers to all the questions, whether it had all the reliable mechanisms with the help of which we would have a reduction of corruption risks at legislative and practical levels. Anna Gevorgyan, coordinator of educational projects at the Institute of Public Policy, finds that as a rule, all the previous strategies remained on paper. Nothing has changed in the politicization of the educational sphere, as well as the corrupt chain that begins at the lower circles, i.e. kindergartens, and reaches higher educational institutions.  “Overcoming corruption shall begin by the new authorities recognizing the occupation of the state and giving a political assessment”. This is the opinion of Levon Barseghyan, Board Chairman of Journalists' Club “Asparez”. State occupation in the spheres of government, economics, media and education indicates the existence of systemic corruption in the country. Levon Barseghyan also cited former president Serzh Sargsyan’s 2015-2016 advisor Bagrat Yesayan, who, called, by virtue of his position, to implement the anti-corruption strategy, made the following expression in the past, “How can corruption be not lived? Corruption is something like love and a feeling”. He advised the students to be more demanding, to wonder what purposes their tuition fees serve, not to be mechanical consumers, but rather be equal to equal for the sake of quality education, to always participate and be informed about the sessions of the higher educational institution trustees and students’ council, raise all the concerning issues. “Healthcare and education were continuously the most corrupted spheres. According to the data of Global Coruption Barometers, in 2016, in the pre-revolution period, 63% of the questioned Armenians expressed the opinion that the involvement of a citizen in the struggle against corruption could not change anything and 77% was not ready to speak up about corruption manifestations. By these indicators, among the 19 countries of Eastern Europe and Central Asia, Armenia is at the bottom of the list”, says Diana Ter-Petrosyan, project coordinator of “Transparency International Anti-Corruption Center”. Artur Sakunts also published data on systemic corruption manifestations. According to these assessments, 50% of children in Armenia do not cross pass the minimum threshold of mathematics and 10% of persons aged 15-21 are considered illiterate. This is a direct consequence of corruption and means that proper efforts were not made to provide quality education.

At the end of the discussion, the students had a possibility to ask the speakers questions. Emma Ghambaryan from VSU spoke of the lack of awareness, as a result of which students often do not get any information regarding the sessions of trustees or students’ council. She asked the speakers, “What real steps do the speakers see on the way to corruption reduction?” Welcoming the student for the questions, Artur Sakunts mentioned that it was persons who thought like her who turned the change of the government into a revolution, “Your rights will never be served to you on a tray, there is a rare opportunity to raise questions, take the opportunity that the current government is very sensitive to public opinion”.

“Corruption will be eradicated when there is a realization of public interest, when accountability and transparency become common. A demanding student is the only pledge to expect reforms in educational system, particularly, in higher educational institutions. Do not be afraid to raise issues, do not be afraid to demand, be daring, because it will be the only driving force of reforming education quality”, concluded Diana Ter-Stepanyan.

The video is available HERE