Results of the monitoring of mass media publications on persons using drugs, drug trafficking and other drug-related issues – 2018-2019 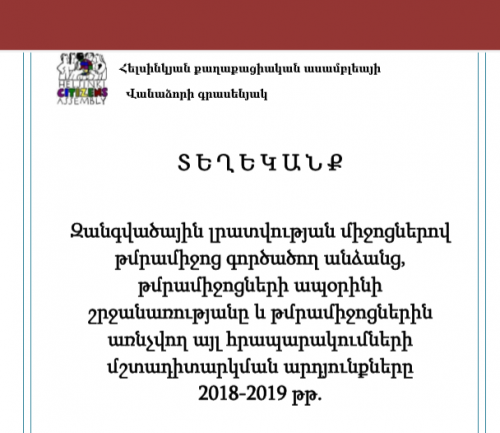 In this report, the Organization has summed up 2018-2019 monitoring results in combination with the data of 2017.

The source of the dissemination and  the nature of the publications were also considered. Thus, most of the collected publications were of legal nature. Regarding the sources of the publications, we find it important to stress that  the pattern of the coverage of drug-related issues by official websites and mass media during previous years continued in 2018-2019, i.e. the majority of materials was of legal nature, while there was no information regarding support for persons using drugs, as well as healthcare and social-rehabilitation services, projects, actions important for the prevention of drug use, as such.

It should be noted that though the RA Ministry of Health and the RA Ministry of Labor and Social Affairs, together with the RA Police and other agencies, are the responsible bodies for the implementation of the actions approved by the RA Government’s decision N 1017-L of 27 September 2018 “On approving the project and timetable of 2019 measures to combat drug addiction and drug trafficking”, proper and regular information was not disseminated in their official websites on the implementation of the project in 2019. The same is true for projects approved in previous years, which again indicates the non-accountable and non-transparent work of the above-mentioned agencies in the sphere.

With regard to mass media publications, the source of which was the RA Ministry of Health, in this case, too, mass media, as a rule, disseminated the publications of the Ministry’s site (in other cases they concerned the prescription of drugs in the frame of palliative care; refutal of the news regarding their free sale, circulation and use; the statistics of drug use in the RA; the difficulties that emergency ambulance doctors face when serving persons using drugs).

It is noteworthy that in 2019, mass media disseminated a publication made by the National Center for Addiction Treatment, where the Center notes the negative impact of marijuana on health and calls on everyone to exclude the use of psychotropic materials and adhere to a healthy lifestyle.

According to our observations, publications with stereotypical terms can also promote the formation of stigma and stereotypes regarding persons using drugs.

It should be recorded that the number of publications that shape an obviously negative or positive attitude towards persons using drugs reduced in 2018 and was equal to zero in 2019. At the same time, there were publications that could have a negative impact on the shaping of the attitude.

In the report, we paid particular attention to the publications that contained human rights violations. In the publications considered in 2018-2019, too, there were cases of violations of the right to protection of personal data and sometimes also publications that made it possible to identify certain persons. So, during the examined period of time, 330 publications of such nature concerned 181 cases and provided information on 241 persons, including 66 persons using drugs.

In this context, it is noteworthy that in the second half of 2019, a positive change was noticed in the RA Police publications and this contributed to the reduction of violations of the above-mentioned right. In parallel, however, it remains concerning that mass media continue publishing such information, the only holder of which must be the Police. This particularly concerns the Police disseminating their information via journalist Gagik Shamshyan.

In 2019, 27 out of 41 publications violating the right to protection of personal data were disseminated on Gagik Shamshyan’s news website. For example, the RA Police made a publication titled “Information on drug trafficking was received: 9 persons were apprehended”, in which no personal data were mentioned, while Gagik Shamshyan’s publication on the same incident contained names and surnames of those apprehended and the concrete amount of the discovered drugs.

Summing up, HCA Vanadzor records that though the monitoring results show some positive change in the approach in terms of publications on persons using drugs, drug trafficking and other drug-related issues, the issues identified by us previously remain mostly unsolved.

The full information paper is available HERE (in Armenian)