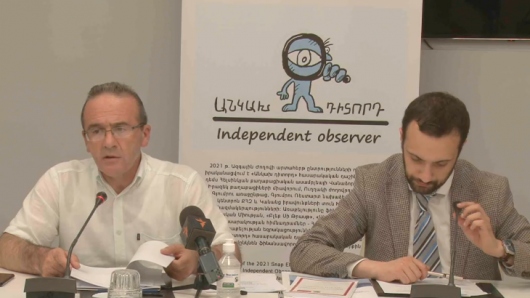 The Independent Observer alliance, to which EPDE member Helsinki Citizens’ Assembly Vanadzor belongs, reported that these elections are unique in that misuse of administrative resources was prevalent not only among the ruling party, but also among the opposition. In previous elections, this was mainly recorded in relation with the candidates in power. Concerning vote buying, observers recorded more cases from the opposition parties.

The range of bribes offered for buying votes ranges widely, from 20 000 – 100 000 AMD (between approx. 30 – 180 Euro), and observers note that there was a wide spread of vote buying reported from local authorities. Vote buying was also recorded in the private sector, where employers threatened or offered bribes, gifts, or services to employees to participate in the campaign of a certain candidate. The Armenia Alliance and ‘I’m honoured Alliance’ were noted as parties that were more often mentioned in reports of vote buying, but in general, no organized country-wide system of vote buying was observed.

The pre-election environment has been very tense with several instances of hate speech and use of symbols associated with violence, which is of great concern. Main political actors in this race were involved in developing such a political discourse. There was also a strong discourse present during the campaign of restricting civil rights. NGOs and observers note that the democratic process is being misused by some actors for anti-democratic actions.

Concerning the involvement of the media in the campaign, observers criticized the decision of public media to not hold a public debate with all candidates. This decision should also have been discussed publicly as it is a vital aspect of the democratic process to allow the public to be fully informed about their choices and for all candidates to have an equal platform to present themselves on. There is currently no law that would legally require public TV channels to do this.

Regarding election management bodies, observes are concerned about the impartiality of territorial election commission members as there have been reports of members being close to a particular party and even frequenting party headquarters, which is prohibited.

The justice system is also a concern. Observers note that some decisions of the Administrative Court have been seriously biased. One especially prominent case was reported where an advertising campaign by Robert Kocharyan for his new book release was twice deemed to be “associated with his election campaign” by the Central Election Commission, which would require that these ad posters be removed. The Administrative Court, however, twice considered this decision invalid. Observers criticize that the administrative courts are thus intervening in the right to equal contest for competitors in an election, as well as violating the right of the voters to have equal access to campaign materials.

Below you may watch a recording with English interpretation of the Independent Observer alliance's press conference, 18.06.2021