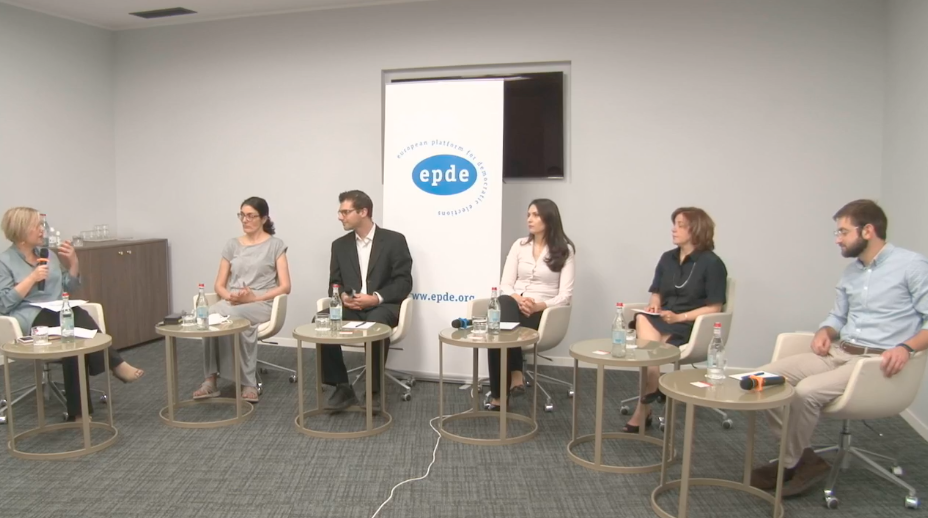 During a public discussion hosted by the EPDE, Armenian election observers and experts reflected on the most important lessons learned from the early parliamentary election, what these could mean for upcoming local elections in the autumn, and what the future steps are for the electoral reform process and how the international community should support these.

Panelists of this discussion were:

Moderation was done by Maria Titizian, Editor-in-Chief of EVN Report. A full video recording of the discussion (in English) can be watched on EPDE’s website here. Full summary of the discussion available below.

This event represented the last in EPDE's series of round tables and public discussions on the early parliamentary elections in Armenia. All reports from these events as well as preliminary observation mission reports by domestic citizen election observers can be found on the EPDE website here

Experts once again emphasized how unpredictable these elections were. Even though some voters who voted for Nikol Pashinyan’s party were dissatisfied with his government’s performance, they still voted in favor of continuing the democratic reform process started by the ruling party after the 2018 revolution. This election was a real test for democracy, even more so than in 2018, since these elections were held in an even more challenging situation. Observers noted that the money spent by opposing contestants on vote bribes or other such strategies violating the Electoral Code were not worth it in the end, as overall voters did not let themselves be swayed by such tactics. This is a very positive trend and political parties should take note of the strong voter engagement and distaste for electoral violations and hopefully adjust their conduct in future elections accordingly.

An often-commented aspect was the lack of substantive political discourse and the high level of political polarization during the election. Experts hope that the clear election result and voter dissatisfaction with how the election was run by certain political parties will also bring about change in the behavior of parties and candidates. The voters’ hunger for real political debate on problems affecting Armenia is great. Ahead of upcoming local elections, political parties should respect this and run their campaign on a program in which they propose solutions to problems.

High youth engagement in elections is also a positive trend which experts hope will bring a change in political culture.

The fact that very few new political parties managed to enter parliament and overcome the electoral threshold of 5% for political parties and 7% for alliances will hopefully also force parties to take stock and rethink their strategy. Armenia lacks a culture of cooperation between political forces, but experts note that voters seem to have trust in political alliances. For the local elections, it will therefore be interesting to see if some parties will be willing to come together into alliances to increase their chances and to start building up a national profile, also in preparation for the next national election in 2026.

What reforms are already planned and what is still needed?

The elimination of the regional open lists ahead of this early parliamentary election represented a big reform step for Armenia. One further important reform that will be coming into effect this year is an electronic registration system for political parties and alliances, simplifying this process for parties, who previously had to submit their documents repeatedly to several territorial election commissions (TECs). An important reform concerning political financing and campaigning regulations will come into effect next year, and observers note that this is an important step towards holding political parties to a higher standard of accountability. Some specific provisions in this reform could, however, still be improved.

A major issue that emerged from this election and which will be relevant for the local elections are the overly-complicated election procedures. According to a recent International Republican Institute (IRI) opinion poll, 90% of voters did not know how the National Assembly is formed. Some procedures were simplified ahead of the early parliamentary election, but questions remained on how mandates would be distributed or how a second round of the election would be conducted in the case that this provision were to be triggered. Armenia’s constitution has a provision to ensure a stable majority in parliament, which the Electoral Code regulates by providing for a second-round election to be held.

This provision has not been triggered in the previous three elections held under the current Electoral Code as a stable majority was always reached. Starting from 2022, the limit for this stable majority will be lowered from 54% to 52%. Election experts are critical of this provision, stating that a second-round election brings with it several issues, such as possibly increasing the size of parliament or causing a disproportionate distribution of seats by awarding “bonus seats” to certain parties. Experts therefore demand that this provision be reexamined.

The issue of how ethnic minorities are represented in parliament also needs to be revisited. Currently, there are provisions ensuring that a certain number of seats are reserved for representatives of ethnic minorities, but these elections demonstrated that the distribution of these seats is done almost randomly without really considering representativeness. Ethnic minorities should also be involved in electoral reform processes to ensure that their ideas for political representation are heard.

The voting system for local elections is likely to confuse voters, warned observers. There are several voting systems in place: communities with less than 4000 registered voters will directly elect their mayor and city council using a majoritarian system, communities with more than 4000 registered voters will move to a proportional list system, with the city council appointing the mayor. Having a mix of different systems further complicates voter education ahead of elections, including explaining how voters should fill in the different ballots for each system. Observers noted that the easier the voting process is, the more checks and balances we have. The goal of electoral reform should be to make it more difficult to falsify votes without making voting harder or more complicated for voters. Much still needs to be done to reach this goal.

These elections demonstrated the need to reform how members of precinct election commissions (PECs) are chosen. One often reported violation was when individuals were being directed to vote a certain way in the polling station, often by proxies of political parties. As PEC members are most often also representatives of political parties, with only 2 out of 8 PEC members being independent, the directing of voters was not always prevented without the intervention of an observer. The number of independent PEC members should be increased to ensure the independence of PECs. One way in which this could be achieved is through the involvement of the younger generation, which perhaps more firmly believes in the idea of democracy and is not burdened by experiences of corruption or other fraudulent practices of previous elections like the older generation. Educating and engaging younger persons, who additionally do not yet have strong ties to state institutions or other vested interests, could be an important step in changing the political culture at this level of electoral management.

The complaints mechanism in place after elections also requires reform. Currently, legislation provides for appealing decisions of election commissions to the Administrative Court, appealing voting results of specific precincts, calling for a recount, and to challenge the election results countrywide. For years, and again in a recent Joint Opinion, the Venice Commission and OSCE ODIHR have criticized the current Electoral Code for being limited. The Electoral Code should broaden the legal standing of who may make a claim, including observers, civil society groups, and voters as well as the range of issues that can be challenged, such as unlawful conduct in campaigning, the voting results, decisions made by electoral commissions. In 2022, some changes will come into effect in this regard, namely complaints can be filed with election commissions electronically, which is important due to the excessively short period for filing complaints, and that some limitations for commission members to challenge voting results in electoral precincts will be lifted.

In addition to these aspects directly related to elections, experts noted that other areas must undergo fundamental change so that a high quality of elections can be achieved, including the justice system in general, the security services, anticorruption bodies, and the ethics system in public life to name a few.

Expectations towards the international community to support further reforms

An important area which requires major reform relates to human resources in almost all fields, not only electoral management. Significant investment will be needed to improve capacity in state institutions and it would be important to conduct some form of needs assessment to find out where international assistance could be best used. Capacity development of political parties would also be an important step in changing the election environment and how elections are conducted. This could include trainings for parties on fundraising or campaigning strategies.

After the local elections, it will be important to push for the adoption of international recommendations by the Venice Commission and OSCE ODIHR in the Electoral Code, which were not included in the current draft of the Electoral Code during the consultation process ahead of the early parliamentary elections. International support for reform actors will be vital during this process.

Previous international support has already greatly impacted the quality of elections in Armenia. Thanks to the support of international donors, who funded video cameras located in 75% of polling stations and voter authentication devices, Armenian voters could be confident in the electoral process and in the fact that their vote would count. Armenian experts and observers value this technical support and hope for such continued investments in forthcoming elections.