The Prosecutor General’s Office will discuss the question of initiating a criminal case against A. Vanetsyan’s representative who claimed a refutation from G. Miskaryan 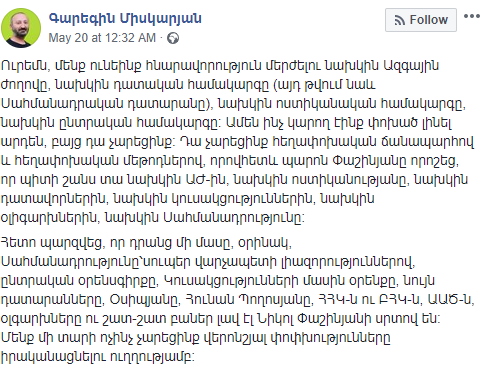 On May 6, 2019, Helsinki Citizens’ Assembly Vanadzor applied to Director of NSS with the matter of giving a legal assessment to NSS employee Vahe Yengibaryan’s actions of presenting a refutation claim to Facebook user Garegin Miskaryan. HCA Vanadzor received a response stating that V. Yenrgibaryan’s action was legal, but materials were being prepared in relation to this in the Special Investigation Service.

On April 30, 2019, Facebook user, “Citizen’s Decision” party member Garegin Miskaryan wrote on his social network page that he had received a letter from the NSS claiming a refutation regarding his post about Director of NSS Artur Vanetsyan.

Making a reference to hetq.am in his post dated April 19, Garegin Miskaryan mentioned, “We have heard that Vanetsyan’s family has a business of flowers and under the name of its greenhouses they were performing customs clearance of Iranian diesel (euro 4, prohibited by EEU law) and selling it under the name of  fuel oil in the past. But the fact that they import fuel in the New Armenia is something new”.

RA NSS Director A. Vanetsyan’s representative Vahe Yengibaryan addressed a note on the NSS form to G. Miskaryan and “as a manifestation of good will” recommended to refute the information within three days, since, as he claimed, it did not fully correspond to reality.

Besides, even if the note had been written with regard to the NSS Director A. Vanetsyan only, V. Yengibaryan, nonetheless, would not have the right to undertake his protection. According to the RA Law “On the National Security Bodies”, NSS employees do not have such powers. According to the same law, NSS employees have the right to protection only when performing their service duties, but this case did not involve any service duties.

On May 6, 2019, Helsinki Citizens’ Assembly Vanadzor, stating the above-mentioned arguments, applied to NSS Director A. Vanetsyan with the matter of giving a legal assessment to NSS employee Vahe Yengibaryan’s actions.

In his response dated May 17, Head of Staff of Director of the National Security Service of RA G. Poghosyan replied that the activity of national security bodies is regulated not only by the RA Law “On National Security Bodies”, but also by legal acts, upon which, presumably, V. Yengibaryan relied.

Head of Staff of Director of the National Security Service considered his actions legal, yet he also informed that materials were being prepared based on the report filed with the Special Investigation Service.

Later we also received the decision of Special Investigation Service on not initiating a criminal case based on the crime report filed by Daniel Ioannisyan and Artur Sakunts.