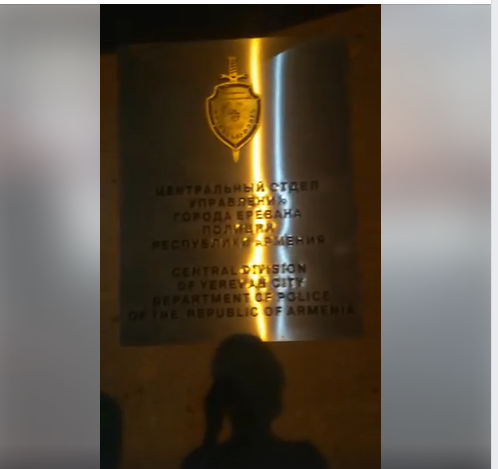 On July 6, 2019, the policemen prohibited fundraising in Yerevan held for the purpose of the protection of Amulsar and presented the organizer of the fundraising -Anna Shahnazaryan – to police under the suspicion of swindling, as mentioned in the police report.

Moreover, on July 8, 2019, a criminal case was initiated under the RA Criminal Code § 258 (hooliganism) against persons conducting a protest act in front of the municipality against the poor state of waste disposal. The participants of the protest threw garbage packages in front of the municipality and then a criminal case was initiated against them.

The actions of Anna Shahnazaryan, who was conducting fundraising for the support of persons peacefully protesting for the protection of Amulsar, cannot be qualified as swindling. The RA Criminal Code defines swindling as theft in significant amount or appropriation of somebody's property rights by cheating or abuse of confidence.

In this case, “Armenian environmental front” civil initiative had announced about the fundraising and its purposes in advance, the fundraising was based on the principle of voluntary donation and there could be no mention of swindling or abuse of confidence, which is required to qualify the action as swindling.  The actions of the organizers had no intention to mislead persons and thus appropriate their property, there could be no mention of swindling, because Anna Shahnazaryan had no intention to appropriate anyone’s property and could not have had such an intention.

With regard to the initiation of criminal case on the grounds of hooliganism against persons who conducted a protest act in front of Yerevan municipality, it should be mentioned that the RA Criminal Code qualifies hooliganism as a brutal violation of public order which is manifested in express  disrespect in relation to public.

The citizens conducted the protest act to publicly express their intolerance with respect to the inadmissible sanitary-hygienic situation which was a consequence of poor organization of waste management in Yerevan city. The citizens’ protest act was directly linked to the improper fulfillment of Yerevan city municipality’s obligations , the aim was completely legal and the selected method was proportionate. In this case, the actions of the local self-government bodies carry disrespectful attitude towards public, since due to the unsolved problem of waste management, the right to live in a healthy environment was violated and the participants of the protest act against it exercised their constitutional rights. In the frame of the protest act against the inaction or improper implementation of the obligations of the municipality, throwing garbage in front of the municipality was a method which cannot be qualified as intention or hooliganism, since the citizens are well aware of the places of garbage dumps  and through this action they tried to attract the attention of the municipality to the situation at the garbage dumps. The protest act pursued a completely legal aim and stems from the necessity of the enjoyment of the right to express in a democratic state, when the right to live and act in a healthy environment was continually violated.

In the mentioned two cases, the policemen’s actions were not legal and led to gross violations of human rights and constitute to facts of pressure over persons who took actions to protect their rights.

The mentioned facts indicate the urgency and necessity of relevant changes in the police in accordance with the requirements of a democratic state.

We demand that the RA Police be instructed in their actions by the logic of respect towards human rights of persons who participate in actions aimed at the provision of the right to the freedom of assemblies, protest acts, public rallies.

At the same time, we find that the initiated criminal cases are attempts of pressure over the protection of human rights and they do not correspond to the principles of a democratic state governed by the rule of law and do not stem from any interest of a democratic state.

We demand from the investigative bodies to discontinue the initiated criminal cases.

Statement regarding the drill call-up in the Republic of Armenia

Measures taken in the sphere of mental health are piecemeal, whereas systemic solutions are needed