Conduct of the RA competent state bodies in cases of conscripts and early discharged servicemen, in terms of respect for human rights principles 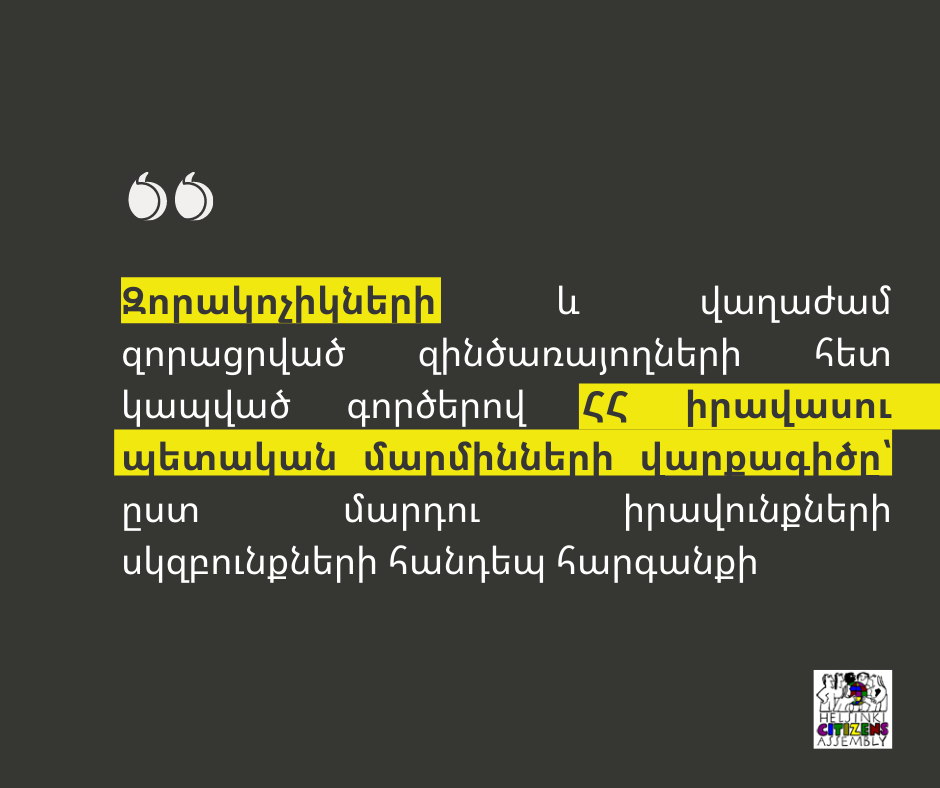 Based on the special regime of compulsory military service and the closed institution status of the Armed Forces, Helsinki Citizens’ Assembly-Vanadzor finds crucial ensuring human rights protection and implementation of civilian oversight over the Armed Forces, which also stems from Article 14 of the RA Constitution, which defines that the Armed Forces shall be under civilian control.

As studies conducted by HCA Vanadzor show, human rights violations in the Armed Forces start during call-up, and the need for oversight over conscripts’ rights protection and restoration of their violated rights arises during that very phase.

Systemic statistical data has been available since 2010. Statistical data regarding problems of the above-mentioned group representatives who applied to HCA Vanadzor during 2010-2019 were presented in the report “Conduct of the RA state bodies during call-up”.

The report comprises issues recorded in the frame of protecting rights of persons subject to military enlistment, conscripts, compulsory-term and contractual servicemen, cadets, officers, (early) discharged compulsory-term, contractual servicemen and officers (294 persons) who applied to HCA Vanadzor to get legal aid in 2020 and 2021 (as of July 31).

The report presents data regarding approaches and conduct of the RA Ministry of Defence and its competent subdivisions, the RA MoD Conscription and Mobilization Service and Territorial Subdivisions, medical commissions, medical institutions, garrison investigative bodies, the RA Administrative Court, the RA General Jurisdiction Court of First Instance during call-ups.

We tried to present the problems that citizens experienced. We also singled out issues recorded during the COVID-19 pandemic.

In the report, we also present our legislative and practical recommendations developed based on the issues recorded.

The full report is available HERE