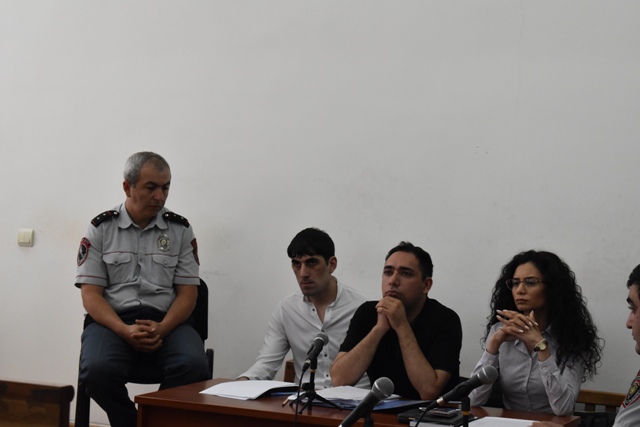 On November 3, 2018, Lori region General Jurisdiction Court interrogated witnesses in the case of Hovik Matinyan who was charged with robbery based on only one testimony.

They were invited to the Court by the petition of H. Matinyan’s defenders – public defender Arshak Mkoyan and HCA Vanadzor lawyer Ani Chatinyan.

It should be reminded that in October 2017, H. Matinyan, who was hosted in Gyulagarak village from the RF, was accused of the robbery of gold jewelry worth 700,000 AMD  by A. Matinyan, another resident of the village. What is noteworthy is that he first described the person who made the robbery of the jewelry one way and then changed his testimony reasoning that he was confused on the day of the robbery.

Besides the victim’s testimony, there are no other facts proving Hovik Matinyan’s guilt in the criminal case. The defendant and his relatives claim that he is unjustly accused of the robbery.

It should be mentioned that the Court rejects the defenders’ petitions on releasing Hovik Abrahamyan from detention and applying another preventive measure. On October 25, 2018, Arshak Mkoyan petitioned to change the preventive measure, but was again rejected.

Ani Chatinyan, the other defender of H. Matinyan, appealed Judge S. Baghdasaryan’s decision on rejecting the petition already in the RA Court of Appeal.

She mentioned that the claim of the Court that in case of being in freedom Hovik Matinyan might flee as he is a citizen of the RF is a discriminatory approach by the Judge, especially given the fact that the defendant’s passport is in the criminal case. Besides, the Court refers to the degree of the gravity of the crime, which itself, according to judgments of the European Court of Human Rights, cannot be a basis for detention. At this moment, the interrogation of the witnesses summoned for this case is finished and there is no danger of influence on them anymore, although there had not been any danger previously, either. With regard to witnesses invited by the petition of the defense party, the danger of influencing them is excluded. No proof examined during the trial managed to prove the action that Hovik was accused of.

On November 3, 2018, the Court heard witnesses summoned by the petition of the defense party. Aghunik Arakelyan, the wife of Hovik Matinyan’s uncle (mother’s brother), was the first to be interrogated. Hovik spent the night of the robbery in her house. She claimed that on that day, Hovik came home at around 12:30 a. m. (the crime was committed at about 4 a.m.) and  assured that he did not leave the house, as, busy with the preparation of her daughter’s wedding party, she was awake all night long and went to bed only in the morning. In response to the questions of the parties, the witness also told the events of the previous 2 days and presented other details. As suggested by the prosecutor, she made a sketch of their house location on a paper and pointed where Hovik’s car was parked.

The fact that Hovik came home at about 12:30 a.m. on the day of the crime was also confirmed by the neighbour, who went out to see if everything was fine as he heard the dog barking and saw car lights. In her testimony, his wife mentioned that in the morning, as she went to drink coffee with Hovik’s grandmother and uncle’s wife, she saw Hovik asleep in the hall.

The fact that Hovik was at home at that night was also confirmed by his uncle and uncle’s son-in-law, the latter spent that night with Hovik in the hall.

The witnesses answered the questions of the parties and the Court, presented details.

After listening to them, Hovik Matinyan and his defenders petitioned to also interrogate the ambulance brigade who provided medical aid to victim Anush Matinyan on the day of the incident. Gyulagarak community head and headmaster of the school will also be interrogated.