11 alliances and 16 parties were nominated to participate in the local elections held through proportional electoral system on 25 September 2022․ Only one force was nominated in  Chambarak community of Gegharkunik province and one in Jrvezh community of Kotayk province. “Civil Contract” was not nominated only in Chambarak community. Registration of the  “Nzhdeh Tseghakron” party was rejected, since the submitted package of the required documents was incomplete.

Thus, 11 alliances and 15 parties were registered to participate in the elections of local self-government bodies in 17 communities. Due to the self-recusal of 19 candidates of the “For the sake of the people” alliance nominated in Gyulagarak community, registration of the alliance was recognized invalid.

The Independent Observer public alliance observed the election campaign in 17 communities (except Chambarak), and the elections on the voting day with 48 mobile groups in all the communities.

A new methodology and toolkit were used while observing these elections.

The Independent Observer issued a midterm report on the electoral campaign phase and the participating forces.

Summary of the observation carried out on the voting day

The morning session of the Commission was observed in 69 out of 314 polling stations.

Accessibility, discipline of the commission, and working conditions

248 polling stations were assessed in terms of accessibility on the voting day.

Voting rooms were not on the ground floor in 11.2%, one was on the basement floor, the others were on the second floor. Even very limited accessibility adjustments become ineffective in these polling stations. This issue was most common in Sisian community.

With the purpose of ensuring that blind persons or persons with vision impairment can vote independently during the elections held through the proportional electoral system, special Braille templates have been used since the NA elections of 2021. These templates, however, were provided only to all the PECs in Talin and PECs functioning under 28 TECs in Akunk and Byureghavan communities.

The observers assessed as inadequate the knowledge of organizing voting of persons with disabilities in 36.2% of the commissions.While this issue was more typical of Tashir and Alaverdi communities, it should be mentioned that except the trainings conducted before the NA elections of 2021, none of the commissions had undergone a special or general training prior to these elections.

Not excluding the negative effect of working conditions, which is obviously interconnected with conscientious performance of duties, it should be mentioned that the observers assessed as inadequate the knowledge of procedures in 7.6% of PECs; in particular, such commissions were common in Sisian community. The lack of knowledge of procedures and their recent amendments, as well as the lack of the relevant training probably essentially affected the conduct of the commissions. This was reflected in their reluctance in terms of taking measures to eliminate violations, which was recorded in 9.6% of polling stations. Limited cases of this issue were recorded in all the communities.

In 2.2% of the polling stations, the observers noticed that there was incomplete registration of the data of those assisting voters unable to vote on their own. Management of the proxy lists was assessed as improper in 6.6% of the polling stations. Problematic commissions often registered more than one proxy from one force, sometimes justifying this by the condition that those persons were in the voting room one at a time, while second proxies mainly stayed in the polling station or nearby area at a distance of a 50-meter radius, by violation of the norms of the law. The commissions also argued that the restriction of 1 proxy was a new regulation, while the restriction on the presence of only 1 proxy from each force always acted in proportional elections of the local self-government bodies.

Statistics, incidents, and summary of violations recorded during the voting 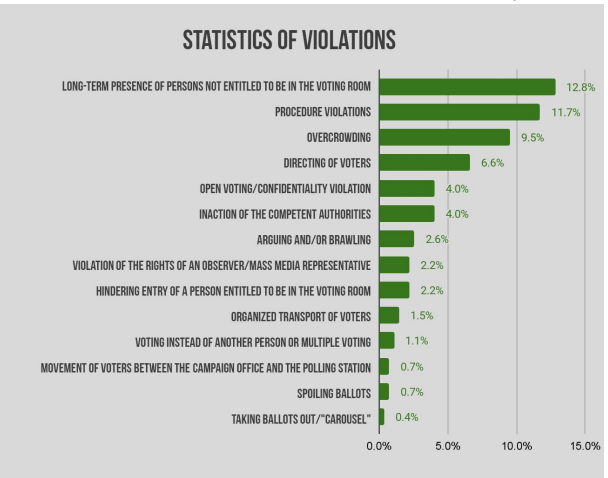 A single violation recorded involved movement of voters between the campaign office in Charentsavan community and two other campaign offices under a residential building nearby (“Civil Contract” and “United Community”) and their possible direction; another violation recorded a single time again took place in Charentsavan community, where a few attempts were made to take ballots out of the polling stations.

Two cases of spoiling ballots, and two cases of double scanning of the passport through the device were recorded. In particular, in Jraber community of Byureghavan, the commission member in charge of the ballot box, being unaware, put the stamps on the envelope, instead of the ballot paper. Cases of double scanning passports were recorded as a result of incorrect instructions of those assisting the process, when they tried to register through the device instead of registering in their registry. Vote count was observed in 58 polling stations. 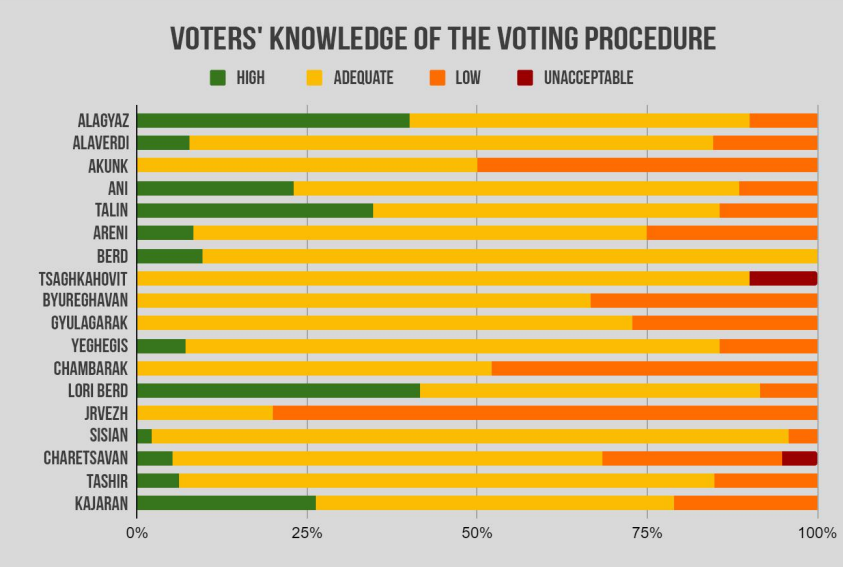 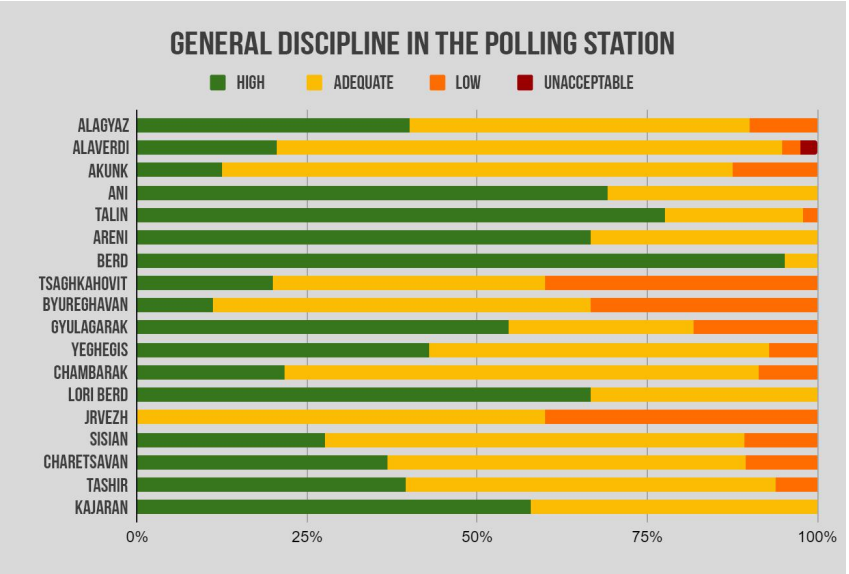 The main issue during the vote count was the commission members’ improper knowledge of legal regulations regarding the electoral processes. In particular, members of the commission were not aware that persons entitled to be present during the summarizing session of vote count can arrive anytime and participate in the session. In a number of polling stations, they tried to hinder entry of both observers and candidates into the voting room.

An essential non-procedural incident occurred only in polling station N 34/6 in Sisian, where the Civil Contract proxy damaged ballots voted in favor of the “Labor and Justice” alliance, with respect to which a relevant protocol was made.

In case of observers, the issue was resolved through the intervention of lawyers and superior commissions; while in case of candidates, they were removed from the polling stations upon the demand of the commission, without challenging that demand due to being unaware of their own rights. Moreover, there were also cases when the commission justified removal of a candidate by the restriction on the presence of more than one candidate. While this restriction applies to proxies of candidates, it does not apply to candidates.

Elections held on 25 September 2022 reflect the decision of voters who participated in the voting in the polling stations. However, it is necessary to have a final summary of the long-term observation and conduct a study of the circumstances and description of violations recorded by the observers in order to assess the degree to which certain conditions and the used illegal methods  affected those decisions, as well as assess elections in communities essentially different from one another.

The Alliance will make a separate publication to assess the quality of elections in the communities and analyze the results.

The observation mission is implemented in the frame of “Independent Observer - local elections 2022” project funded by the Prague Civil Society Center and European Endowment for Democracy.

Responsibility for the content of this publication lies with the Independent Observer public alliance, and it does not necessarily reflect the views of the funding organization.