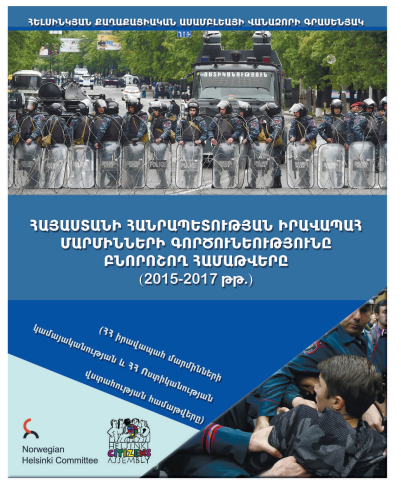 The survey has been conducted on the whole territory of the Republic of Armenia since 2015. Before that, a pilot survey was conducted in the RA northern regions in 2013.

The study conducted in 2017 and the comparison of its findings with the findings of similar studies conducted in 2015 and 2016 revealed a number of patterns and trends in public perceptions of the activity of the law enforcement agencies.

Hence, steps need to be taken to increase public trust in the Police, which should be based on a radical change in the way the Police operates and in its mission. The provision that the Police fulfills its duties set by the law should be rooted in public consciousness. When the Police starts to ensure people’s security unconditionally, to prevent or to stop crimes and administrative offenses, to solve crimes regardless of the chains where those crimes are/were committed, to ensure maintenance of social order and social security without bias and so forth, trust in the Police will be built among the society.

The mass media, which cover their activity, have an immense role in this and can substantially change the public opinion.
Taking into consideration the fact that the assessments of the law enforcement agencies vary from region to region, the law enforcement agencies should conduct the assessment and management of their activity in a differentiated manner according to regions, taking into account the public opinion of each region.

The REPORT presents in detail the methodology of the survey, who were questioned and what results were recorded.

The appendices are available HERE.