Do state structures continue to consider not purposeful the adoption of a Law on Missing Persons? 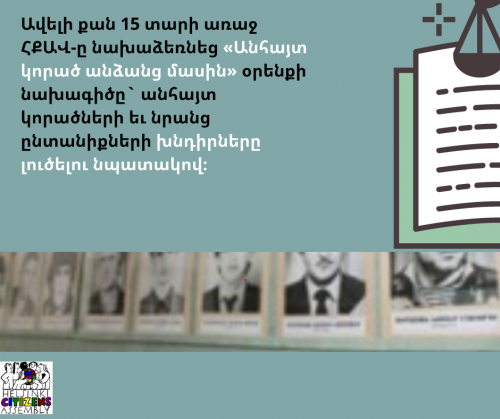 August 30 has been declared as the international day of the disappeared.

More than 15 years ago, HCA Vanadzor initiated a draft law “On missing persons” in order to give solutions to the problems of missing persons and their families.

During the war actions of April 2016, we also had a situation where there was no information on the place and fate of some servicemen. This situation again brought back the need to adopt the RA Law “On Missing Persons” to the agenda, while in the Republic of Armenia, the need to adopt a Law on Missing Persons is not considered urgent. We have this situation in the conditions where on 24 May 2007, Parliamentary Assembly of the Council of Europe adopted Resolution 1553 (2007) based on the report of 7 March 2007 by Leo Platvoet, rapporteur of Committee on Migration, Refugees and Population in Armenia, Georgia and Azerbaijan, which was made as a result of his visit to South Caucasus.

Before that, the draft law was put into circulation in the National Assembly and then withdrawn from circulation as there was a need to make certain corrections.

For a long time, there has been no information on this draft law. In 2015, HCA Vanadzor decided to get information from the Ministry of Justice. In response to the inquiry, the Ministry replied that they did not consider the adoption of the law to be urgent.

5 more years later, in response to another inquiry sent by us, the Ministry of Justice informed that as a result of 19 February 2020 session of the Interdepartmental Commission on Prisoners of War, Hostages and Missing Persons, RA Ministry of Justice sent relevant letters to the RA Ministry of Defense and RA Miistry of Foreign Affairs, asking them present their positions on the draft Law “On missing Persons” developed in 2011 or in general, the purposefullness of putting such a draft into circulation. The Ministry promised to provide information about the further process after the provision of the relevant positions.

By adopting and applying the RA Law “On missing persons”, the state would guarantee its responsibility in the protection of rights of missing persons and their family members.

Legal regulations established by sub-legislative acts so far are not effective, the right of relatives of missing persons to be informed, as well as their right to receive social, psychological, legal and other support are not secured.