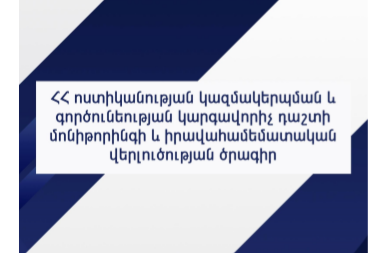 The aim of the ‟Project of monitoring and legal-comparative analysis of the regulatory field of the RA Police organization and activity” is to discover, from the perspective of international obligations undertaken by the Republic of Armenia, the RA mechanisms of public and state control/oversight over police organization and activity enshrined in legislation, as well as firmly established judicial and administrative practice.

While presenting the system of international standards, special attention was given to other normative provisions of mandatory nature (and the comments of international bodies established based on the treaties comprised of the mentioned provisions), the contrast of the RA legislative, judicial and administrative practice with which is apparent and no further substantiations are needed. Among the mandatory sources, a special place is taken by the precedents of the European Court of Human Rights (ECHR), reports of Council of Europe’s Committee for the Prevention of Torture (CPT) and reports of UN Committee against Torture. Reports of OSCE and other international structures, as well as the best foreign applicable experience are among the guiding sources.

The analysis was carried out with the application of legal-comparative methods by examining international standards, the best foreign practice and domestic mechanisms with the combination of the current state and development prospectives (including bills on the regulatory field).

The report is available HERE