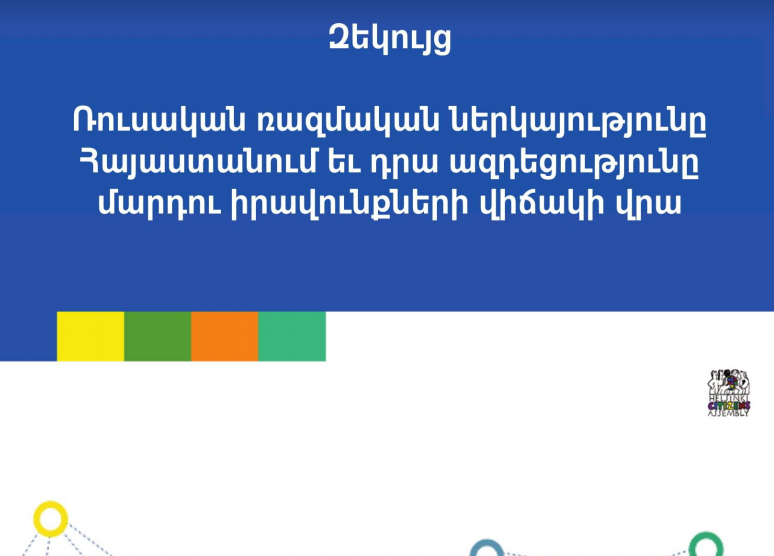 The reports touch upon the Russian military presence in EaP countries, i.e. Armenia, Moldova and Ukraine, human rights violation resulting from it and interstate documents.

The report on Armenia presents concerns in regard to the relations regulated by interstate documents signed between the Republic of Armenia and the Russian Federation, incidents that occured in Armenia with the involvement of Russian military base servicemen, problems related to the impact of the presence of the Russian military base on the human rights situation in Armenia, including issues related to the noncompliance of interstate documents with the RA Constitution.

Expecting the opinions and observations of the responsible state structures in regard to the questions and issues presented in the report on Armenia, on 10 January 2020, HCA Vanadzor sent the above-mentioned reports to:

1.Chair of the RA NA Standing Committee on Protection of Human Rights and Public Affairs Naira Zohrabyan presented observations in regard to the report on Armenia on 24 January 2020.

In regard to the incidents presented in the report that happened in Armenia with the involvement of the Russian military base servicemen, the Chair of the Committee qualified them as tragic and concerning and expressed willingness to work with HCA Vanadzor. She also added that she would give the report to the RA Prosecutor General in order to study the incidents that happened in the RA with the involvement of the RF military base servicemen and the issues related to the impact of the Russian military base on the human rights situation in the RA.

2.On 19 February 2020, Chairman of the Standing Committee on Defense and Security Issues of the National Assembly Andranik Kocharyan touched upon the matters raised in the note by HCA Vanadzor. He stated that currently, in the frame of its control functions, the Committee conducted a number of measures aimed at the clarification of the issues raised by the Organization.

3.General Secretary of RA MoD Artur Sargsyan touched upon the report on Armenia in his letter of 4 March 2020. He presented the importance of the RF military base in the Republic of Armenia in the context of obligations enshrined in the agreements signed between the mentioned countries.

In particular, MoD stated that the presence of the Russian military base in the RA territory is in the interests of the Republic of Armenia, taking into account the following conditions:

In the letter, the RA MoD also made a reference to other treaties signed between the RA and the RF. In particular, the MoD recorded that the “Agreement on establishment of a Joint Regional Air Defense System of Collective Security in Caucasus” signed in 2015 establishes an air defense system, which creates an opportunity to organize the planning of using air defense unified system troops in the mentioned region, cooperation in the frame of air defense and unified operative and military preparation by maintaining the right to make decisions on the use of RA air defense troops in peaceful times.

Touching upon the issues on the Russian military base and border guard troops presented in the report, MoD recorded that they should not be presented in combination, since their relations are regulated by separate international agreements, they have different problems, goals, states and subordination. In particular, the military base is under the RF Ministry of Defense, while the border guard troops are under Russian Federal Security Service. The MoD suggested applying to the competent body, i.e. RA National Security Service, to discuss the issues concerning the border guard troops.

The MoD also mentioned that based on the fact that besides the legal documents mentioned in the report, there are also other RA international treaties  regulating the relations connected with state and service secret, as well as normative acts stemming from them, it is not possible for the authors of the report to give an objective, full and comprehensive conclusion on the topic of the report.

In regard to the violations made by the Russian military base servicemen and the problems of the lack of control over them as mentioned by HCA Vanadzor in the report, the RA MoD only invoked the Draft Agreement  “Between the RA and the RF on military police bodies of the RF armed forces in the Russian military station in the RA territory”. The draft envisages provisions on  the legality, order and provision of military discipline in military formations of the RF armed forces, conduction of investigation of RF military base servicemen’s disciplinary offences according to the competence, and other possible problematic issues.

When making comments on this part of the report, the RA MoD expressed an opinion that in HCA Vanadzor report there were no objective substantiations in regard to the incidents that occurred with the involvement of the Russian military base servicemen and the human rights in the RA.

Besides, it was stated that in the conclusions and assessments presented in the report there were also no objective substantiations in regard to human rights violations and military-political issues related to the Russian military base.

It should be mentioned that in order to have a certain picture of the conduction of investigation into disciplinary violations by the RF military base servicemen, on 29 October 2019, HCA Vanadzor sent an inquiry to the RA Prosecutor General. The inquiry claimed information on the initiation of a criminal case and the steps taken in regard to the use of weapon and explosives by the RF 102 military base servicemen during the military exercises conducted in Shirak region Panik village in 2018 without informing the RA competent bodies in advance. In response to the Organization’s inquiry, on 11 November 2019, RA Shirak region Prosecutor’s Office informed that the materials prepared on the incident had been sent to the RF competent bodies.  Based on the answer, on 21 November 2019, HCA Vanadzor sent another information inquiry claiming from the RA Prosecutor General to clarify what information the RA Prosecutor General’s Office had on the steps taken and the results in the frame of the case after sending the above-mentioned materials. RA Prosecutor’s Office Shirak region Prosecutor’s Office sent a response on 29 November 2019. According to it, “the Agreement on the issues of jurisdiction and mutual legal assistance in legal matters related to the positioning of the Russian military base in the territory of the Republic of Armenia signed between the Republic of Armenia and the Russian Federation in 1997 does not define any obligation to inform the other party of the decision taken”.

CSP Working Group on the Fight against Torture developed torture prohibition indices for eight countries. Armenia is among them

On participation of A. Razgildeyev, serviceman of the Russian military base located in Gyumri, in the court session on the case of J. Ghukasyan’s death