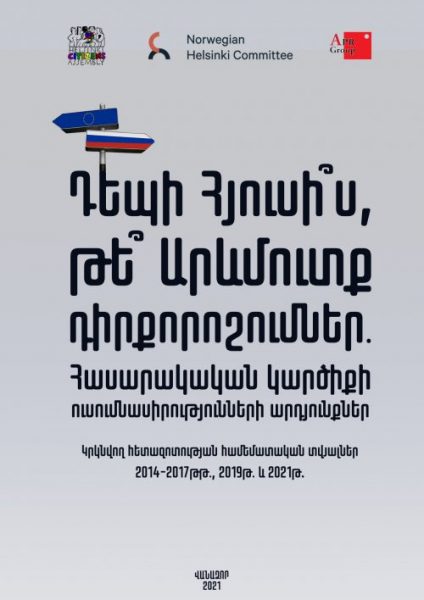 The sociological survey was conducted with the involvement of APR Group NGO in the whole RA territory. The survey has been conducted for the sixth time already since 2014.One of the survey objectives is to find out society’s positions regarding the European Union and the Eurasian Economic Union.

If we compare results of 2016, 2017, 2019 and 2021, we can notice that after war operations, respondents’ attitude towards the Russian Federation and EAEU is noticeably negative.

The number of those who are in favor of membership both in EU and EAEU has grown most in Lori, Tavush and Aragatsotn, and has reduced most in Gegharkunik, Syunik and Shirak.

The picture has changed in terms of sources of information. Previously, majority of those whose source of information was TV - which is controlled by the authorities and has a wide audience - were in favor of the RA membership in EAEU, and the majority of those whose source of information was social sites - less controlled by the authorities - preferred membership in the European Union. Currently, however, the picture is different. Various views are presented via television and information does not take one direction. In such situations, the number of those preferring membership “in both EU and EAEU” grows. We have the same picture regarding public opinions formed by the print media. And when it comes to those following online media, there are many preferring membership in the European Union.

According to the data of 2021, there is also a link between those who want to emigrate and those who prefer membership in the European Union: supporters of EU membership are more prone to emigrate. It can be assumed during the year after war operations, emigration intentions are intensifying in public moods. What is even more, those are not intentions to emigrate to Russia.

Attitudes towards the future of the country have also become pessimistic.

For survey data per age, education degree, income size and other criteria, click HERE (in Armenian)