How to Overcome the Consequences of Torture; a guide was published 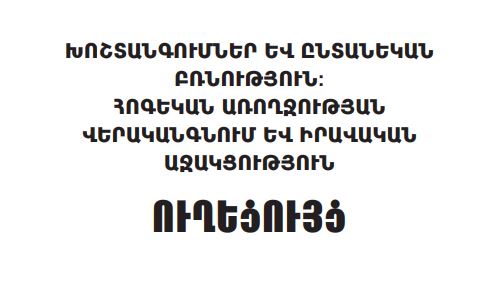 The prohibition of torture and inhuman or degrading treatment is enshrined in a number of regional and universal instruments.

Torture means any act by which pain or suffering, whether physical or mental, is intentionally inflicted on a person for such purposes as punishing him/her, taking revenge on him/her, seeking obedience or submissiveness, exacting confession, coercing a person into refuting his/her views, intimidation and suppression.

Torture ranges among the gravest violation of human rights. Despite this, impunity for this crime still remains a matter of concern.

The Helsinki Citizens’ Assembly-Vanadzor submitted 32 crime reports on the acts of torture, inhuman treatment and violence identified in 2014-2016; police officers were brought to disciplinary liability after the command investigation based on only 3 of the crime reports above. As to the decrees of the agency responsible for preliminary investigation on discontinuing the proceedings issued on another 6 crime reports, the Organization appealed them before courts of law; the Organization appealed 3 of the decrees above to the European Court of Human Rights. As for another 8 crime reports, the citizens withdrew their complaints.

Along with physical consequences, torture may also cause mental disorders and other adverse implications; as a result, torture survivors become more vulnerable and unable to manage their own emotions and feelings.

To provide assistance to torture survivors and their families, Helsinki Citizens’ Assembly-Vanadzor and the Georgian Centre for Psychosocial and Medical Rehabilitation of Torture Victims (GCRT) prepared a guide which covers the types of torture, their possible adverse impacts and options to overcome them.