Expertise results have not been received for more than a year 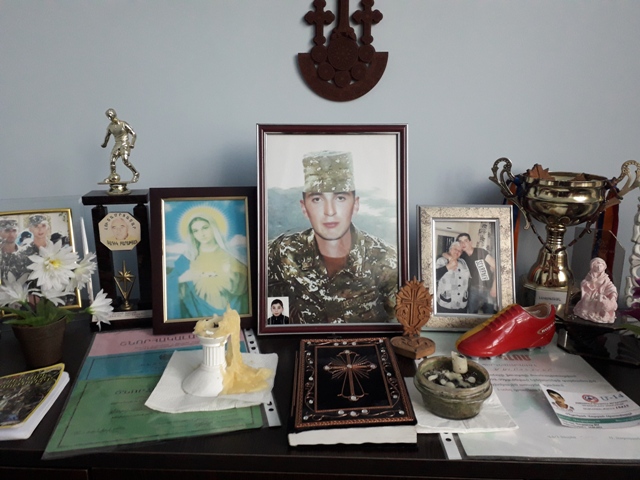 “The criminal case initiated in 2017 on the death case of 19-year-old serviceman Vardan Melkonyan seems to be “in repose”, says HCA Vanadzor lawyer Arayik Zalyan.

Let us remind that at around 6:30 on July 23, 2017, junior sergeant Vardan Melkonyan was discovered hanged by a military belt from a tree in Yerevan city Nubarashen community No. 95 School nearby area.

During the preliminary investigation, upon the examination of Melkonyan’s corpse, a mobile phone was discovered from the pocket of his military trousers. In connection with the video-audio and text files found therein, forensic psychological and forensic psychiatric complex expertise was necessary to be conducted.

According to the investigators, the content of the mobile phone could contain the necessary information on Melkonyan’s psychological state preceding the suicide and it could help find out what might have incited the suicide of the 19-year-old serviceman. The conduction of the expertise was assigned to “National bureau of expertises” SNCO and the experts of the RA Ministry of Justice forensic psychiatric expertise commission. Priority was particularly given to forensic psychiatric expertise results.

The preliminary investigation of the criminal case initiated under Article 110 §1 features (inciting suicide) of the RA Criminal Code has been continuing for two years already.

Vardan Melkonyan’s fellow serviceman H.M., who was involved in the case as the accused, has already been demobilized. Detention was first chosen as a pre-trial restriction and was later changed to the command control and a signature on not leaving after demobilization.

Vardan Melkonyan’s mother Karine Manukyan says that she and her son were very close, the latter shared everything with her and she would have definitely felt any change in her son’s psychological state. Mrs. Karine claims that she never noticed anything strange or suspicious in her son’s behaviour with regard to having a mental problem. Moreover, she claims that the quarrel that took place in the military unit on the day of her son’s death was “artificially made up”. She recalls that when the information on Vardan’s death reached the military unit, one of the fellow servicemen took his head in his hands and said, “What have I done?”

“He felt some threat when he called his friend from Vanadzor and asked for 20,000 drams to come to Vanadzor, I learnt about it later, had I been told about it, I would have felt that something was wrong with my son”, says Mrs. Karine wiping her wet eyes. She was also informed that on the day of the incident, before the quarrel, 2 persons in civilian clothes were present in the military unit. “When I asked the investigator who the two persons with civilian clothes were, why they had entered the military unit, he said that they were contract servicemen’s friends, they came and drank coffee and then left. I asked since when the military unit had become a cafe for others to come, drink coffee and leave?”

With regard to forensic psychological and forensic psychiatric expertise results, she does not particularly hope that they could somehow shed light on the outcome of the case.  “How should they conduct expertise to understand whether my son’s psychological state could have incited him to commit a suicide, when those who know Vardan and around 50 interrogated servicemen mention that he was not capable of such a thing, he was an even-minded boy. Are they so overloaded that they have not been able to do their job in a year and a half? I also called the expert to speed it up, they promised to do so, but as you can see, everything is the same”.

During this period, Mrs. Karine was in the Prosecutor’s office and at the military prosecutor’s, she asked to have a meeting with the forensic doctor. During the autopsy, a bruise found on one of the testicles caused her to doubt whether violence had been applied to her son. For unknown reasons, the forensic medical expertise conclusion does not contain anything about the bruise.

“The Prosecutor opened and showed the conclusion to me, there was nothing written there, I did not understand whether they had cut it out. I asked the investigator about the bruise, first he refused that there had been a bruise, but when I insisted, he said that they had watched the videos and saw the bruise. Someone probably hit Vardan, he bent down from the pain, they threw him down and stifled from behind and then they hung him from the tree to make it look like something else. The tree branch was shorter than him, could someone be stifled with his feet bent? I don’t believe, it was a murder for 100%, my son could not have done anything like that, first and foremost, not to hurt me. The expertise was assigned to blemish my boy and show as if he was in a psychological imbalance when he did that, that’s what they want to show. And de;aying this for such a long time was done to hide something and  make it look like the officers had nothing to do with whatever happened”.

Based on the condition that the postponements of the preliminary investigation unnecessarily pose threat to the constitutional safeguard of ensuring justice, Karine Manukyan, the victim’s successor, with the support of HCA Vanadzor, sent letters to the senior investigator of the RA Investigative Committee Military Investigation General Department 4th garrison investigation division and RA Prosecutor General, asking to take measures to conduct the investigation in a proper manner and take the necessary actions in a timely manner prescribed by law. In her letter addressed to the Prosecutor General, invoking another similar case examined at the European Court of Human Rights, where the expertise results were known in 6 months, Karine Manukyan drew attention particularly to the condition that a year after the expertise was assigned, no action was taken to provide the efficient process of the investigation and to contribute to the disclosure of the case.

HCA Vanadzor lawyer Arayik Zalyan, who is the representative of the victim’s successor in this case, invokes Article 2 and Article 13 of the European Convention of Human Rights, where, in the first case, everyone’s right to life shall be protected by law, and in the second case, everyone whose rights and freedoms as set forth in the Convention are violated shall have an effective remedy before a national authority. “More than a year has passed since an expertise was assigned, but we still record the violations of the above-mentioned provisions. The preliminary investigation of this case is not conducted for uncertain and ungrounded reasons. Waiting for the results of the expertise greatly impedes the principle of implementing justice in a reasonable timeframe”, says A. Zalyan.

The letter addressed to the RA Prosecutor General was responded to by the RA Central Military Prosecutor’s Office. It is particularly mentioned in the letter that during January 9, 2019-July 22, 2019, the preliminary investigation body sent reminders in writing and the investigator and the supervising prosecutor made visits trying to find out from the expertise institution the reasons for delaying forensic psychological and forensic psychiatric complex expertise. The institution reasoned that the delay was exclusively due to work overload and ensured on July 22, 2019, that in a short period of time the complex expertise would be completed and a conclusion would be given.

Not satisfied with the response of “National bureau of expertises”, Artur Sakunts, HCA Vanadzor Chairman, sent a letter with similar content to the RA Prime Minister Nikol Pashinyan, asking to provide information about the number and types of organizations that conduct expertises in the RA.

In contrast with the letter sent by “National bureau of expertises”, the letter received from the staff of the Prime Minister addressed the points asked.

It turns out that the forensic psychiatric expert council under the RA Ministry of Health conducts 120-140 expertises yearly. The commission staff consists of 8 experts, at least 3 experts take part in each expertise, the commission does not have a staff list. For the expertise of one person each expert is paid 7000 drams, experts from other agencies are paid 10,000 drams for one visit and yearly, 4 such visits are envisaged.

To sum up, HCA Vanadzor expresses concern that state bodies implementing essential functions do not have proper funding, enough employees, cannot conduct, in a timely manner, expertises envisaged by criminal cases. All this not only impedes the disclosure of the case and punishment of perpetrators, but also the provision of human rights protection enshrined by law, fair investigation and implementation of justice in a reasonable timeframe. At the same time, HCA Vanadzor recommends increasing the funding of institutions conducting expertises and adding new staff positions.

Nevertheless, Vardan Melkonyan’s mother Karine Manukyan hopes that the case will undergo a just trial. On October 26, she addressed a letter on the delay of the expertises to the RA Prime Minister Nikol Pashinyan. She also plans to apply to the RA President Armen Sargsyan and monitoring work group that examines criminal cases initiated on death cases during military service in peaceful conditions.