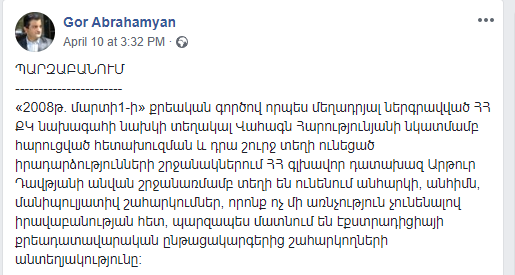 On April 10, 2020, Gor Abrahamyan, Advisor to the RA Prosecutor General, made a post on his Facebook page in regard to the Russian Federation not extraditing to the Republic of Armenia Vahagn Harutyunyan, former Head of the RA Investigative Committee, who is wanted in the frame of the criminal case of March 1, 2008.

In his post, Gor Abrahamyan first touched upon certain details of the criminal case and then expressed his position regarding a number of matters in relation to the case.

“According to the criminal legal procedures and the simplest logic, a person cannot be wanted and it cannot be claimed from another country to extradite that person without having him involved as an accused. While, the criminal case, to which the above-mentioned “arguments” refer, was initiated on July 12, 2019. And the body conducting the preliminary investigation, that is, Special Investigation Service, has not charged V. Harutyunyan based on the mentioned points, for the clear reason that relevant proofs have not been obtained․

In regard to G. Abrahamyan’s observation, we should mentioned that according to Article 53 (3), “The prosecutor is authorized to conduct the following during the pre-trial  and investigation proceedings: 7) instruct the investigation body to make decisions regarding detention, apprehension, arrest and other procedural actions”.

Article 53 of the RA Criminal Procedure Code establishes the exceptional powers of the prosecutor in the frame of pretrial proceedings, in particular:

Moreover, according to Article 55 (5), the investigator is obligated to do the legitimate instructions of the prosecutor.

According to Gor Abrahamyan, since the Prosecutor’s Office does not collect proofs, “accusations” should have been addressed to the Special Investigation Service. However, Gor Abrahamyan forgets that the Prosecutor has a function of procedural oversight. The Prosecutor has a positive obligation in regard to disclovering the crime and in this frame, he is to make efforts to conduct effective oversight over the investigative body collecting proofs.

“We hope that the “experts” of criminal procedure and extradition process do not suggest charging a person solely based on reports against him, or creating inadmissible proofs as grounds for the guilt in order to build artificial foundation to successfully conduct the extradition process”.

According to the cited part, we record that G.Abrahamyan publicly announces that the declared search for V. Harutyunyan as a wanted person has a perfunctory nature, since there is no legal ground to charge him and conduct the extradition process.

“When it comes to absurd claims regarding the necessity to publish the RA Prosecutor Office petition on extraditing V. Harutyunyan, where there is also an attempt to see conspiracy motives  of acting for his interests and not being interested in extraditing V.Harutyunyan, such a document cannot be published, since officially it does not exist yet and it cannot exist, because a process of extradition has not commenced as such, and therefore, no petition on extradition has been made to the RF Prosecutor General’s Office”.

Article 61 and Article 62 of the CIS Convention on legal assistance and legal relations on civil, family and criminal cases (hereinafter referred to as CIS Convention) regulate the process of detaining and releasing a person before receiving of the petition on extradition.

Article 61 of the CIS Convention:

According to Article 62 of the same Convention,

1) The person detained according to item 1 of Article 61 must be released,i if the demand of extradition is not received within one  month since the detention.

2) The person detained according to item 2 of Article 61 must be released, if the demand of extradition is not received within the term determined for detention in the legislation.

It is noteworthy that the RA Prosecutor’s Office mentions that after V. Harutyunyan’s detention, they did not make a petition to the RF Prosecutor’s Office, since Harutyunyan was released based on the expiration of the statute of limitations. Nevertheless, according to the CIS Convention provisions invoked, the matter of statute of limitations is not discussed in the detention stage. After the detention, the RA Prosecutor’s Office was to send a demand of extradition before the expiration of the time period legally envisaged for detention, and in case the demand was not received, the person could get released. The Russian side could only make a decision on arrest after receiving the demand within the envisaged time period, which would be followed by the discussion of the petition of extradition, and only in this stage it could be possible to touch upon the issue of the statute of limitations.

It stems from the CIS Convention invoked that before sending a petition of arrest, the demanding State should send a letter on detention and mention the actions the person is charged with, and only based on this, the Russian side could detain the relevant person. The RA Prosecutor’s Office, consciously, does not  mention this in their publication and only mentions the absence of the petition to extradite. This means that the Russian side had to have at least a legal basis provided by the Armenian side in order to make a decision on detaining V. Harutyunyan. They can at least publish the document, which amounts to a legal ground. Thus, it stems from the interests of the Prosecutor’s Office to cling to the title of the document and not publish what actually exists (which was not a secret of preliminary investigation) in order to dispel public suspicions that there was intention or inaction by the Prosecutor’s Office. However, we cannot see such an ambition.

It stems from the logic of the Convention norms that there was obvious inaction by the RA Prosecutor General’s Office, which did not send a petition of arrest  in the time and manner prescribed by law after the detention, in the absence of which, the extraditing State could release the person from detention.

Thus, the RA Prosecutor General’s Office obviously and consciously neglects at least the petition on detention, without which the Russian side could not have detained V. Harutyunyan. Why? Because a question would immediately arise as to why they had not sent petitions on remand in custody and extradition in a timely manner.

Also, the following should be made a matter of discussion: did the RF release V. Harutyunyan based on the statute of limitations or the lack of the demand after the detention?

“Just after the RA Police was informed about the RF Police decision on detention,  the RA Prosecutor General’s Office, not even waiting for the decision on temporary arrest to be made, commenced the preparation of the demand of extradition in that stage. However, in a few hours, when the time period envisaged for detention had not even expired, the RF Prosecutor’s Office made a decision to release V. Harutyunyan based on the expiration of the statute of limitations of the actions  he was charged with, as established by their legislation”.

According to Article 80 of the CIS Convention, “The communications concerning extradition and criminal prosecution, as well as the execution of investigative commissions, which infringe prosecutors’ rights and require prosecutor’s sanctions are conducted by general prosecutors (prosecutors) of the Contracting Parties”.

Ultimately, it should be mentioned that even if a criminal case was initiated, the person was charged and there were chargeable actions, the RA Prosecutor General should have started the implementation of extradition, based on the criminal prosecution already initiated. In regard to the statute of limitations of the chargeable action, it should not be a subject to be assessed by the demanding state, but rather, the extraditing state should make a decision. Making a reference to the CIS Convention or the fact that the RF released the person  based on the statute of limitations and did not extradite him, the RA prosecutor General’s Office showed obvious inaction.

“According to Article 57 (1) point b of the Convention of legal aid and legal relations in civil, family and criminal cases (both RA and RF are members of the Convention), “The extradition is not performed, if at the moment of receiving the request, the criminal prosecution, according to the legislation of the requested Contracting Party, cannot be started or the verdict cannot be executed because of expiration of the term or by other legal reasons” ”.

First of all, the Prosecutor publicly declares that there is no document on the extradition of the person and the document could not have existed, then he refers to Article 57 of the CIS Convention, which lists the reasons for not extraditing a person, and invokes the ground of the statute of limitations. We should clearly record that  the Article is titled as “Refusal in extradition”, which presupposes that a process of extradition should commence, only as a result of which the extraditing state can assess the presence or absence of grounds for extradition.

“It is obvious that in the case of the Convention’s imperative condition of refusal based on the expired statute of limitations, presenting such a petition is simply useless, since, once made, it will be subject to refusal”.

Thus, a process is publicly initiated to show as if the Prosecutor’s Office indeed strives to achieve the extradition of V. Harutyunyan to the RA. At the same time, it is strange, to say the least, to mention in the publication that the petition had not been made, realizing that the extradition would not be possible on the grounds that the statute of limitations had expired.

In regard to this, it should be mentioned that in July 2019, Vahagn Abrahamyan noted in the report on torture and violence against him that those actions were done personally by Vahagn Harutyunyan. In this case, the Prosecutor’s Office should have taken immediate and effective control measures so that the investigative bodies claim clarifications or interrogate  the person who had done torture actions or used violence.  These actions could have been done only in case of being involved as a suspect or accused in a criminal case. The Prosecutor General’s  Office should have ensured the state’s positive obligations as established by the UN and Council of Europe Conventions. The State’s positive obligations presuppose decision-making on being involved as a suspect or accused, and choosing detention on remand, as well as presenting a petition on extraditing the accused. None of the aforementioned actions were taken by the RA Prosecutor General’s Office. Moreover, if these actions had been taken, the Russian side could not have made a reference to the statute of limitations. By the way, so far, Vahagn Abgaryan has not been asked to provide explanations and no action has been done in regard to the report on violence and torture.

1․ Not to adopt, from now on, a perfunctory approach in regard to the discovery of torture cases in order to  raise their rating or gain trust of the public in the frame of cases of interest to the public, and to make proper and effective efforts to fulfill the positive obligations of the state.

2․ To carry out effective judicial control, in compliance with the RA Law on the Prosecutor’s Office and the criminal procedure, in criminal cases on crimes committed by officials, which will lead to the discovery of the perpetrators and imposition of a proper punishment, and not to try to assess those who speak up about the fact that those obligations have not been fulfilled.