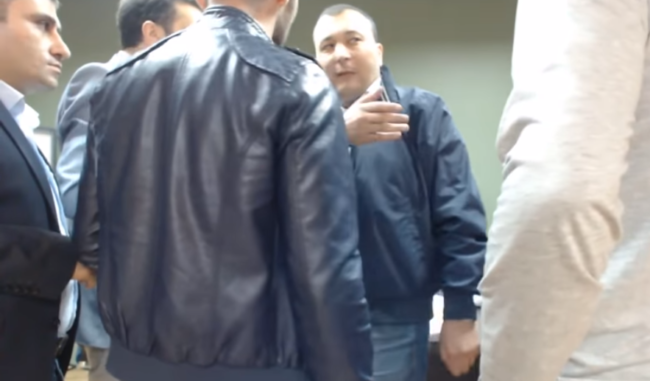 No criminal case was initiated concerning the incident of Prosperous Armenia Party representative Vahe Enfiajyan and his supporters hindering the process of conference on the eve of Yerevan Council of Elders Election in Media center during the press conference of ‘Independent Observer’ Alliance on September 22, 2018. Moreover, according to the investigator, he was not able to get explanations from him.

HCA Vanadzor president Artur Sakunts was informed about this today, on October 16, 2018.

Let us remind that during the press conference, ‘Independent Observer Alliance’ representatives Artur Sakunts, Daniel Ioannisyan and Victoria Andreasyan were talking about the observation mission to be  conducted by the Alliance on the election day and presenting the results of media monitoring when PAP representatives headed by Vahe Enfiajyan broke into the hall and started screaming and accusing the press conference participants of disseminating false information about them and doing anti-propaganda. Vahe Enfiajyan also tried to interfere with the speakers’ actions and sat next to them. As a result of his actions, the conference was interrupted.

President of HCA Vanadzor, Artur Sakunts filed a crime report to the policemen who arrived at the crime scene.

On October 2, 2018, A. Voskanyan, investigator of the central division of the RA Police Yerevan City Department, made a decision on not initiating a criminal case on A. Sakunts’s report.

It is noteworthy that in his decision on not initiating a criminal case, A. Voskanyan mentions that ‘during the preparation of the materials, it was impossible to get explanations from the RA MP Vahe Enfiajyan and those who were present at the press conference’. The investigator does not clarify as to what obstacles hindered them to find the RA MP Vahe Enfiajyan and get explanations from him. However, based on the explanations that he did not get, he concludes that there is no element of crime in their actions.

It should also be noted that in the decision of not initiating a criminal case, references are only made to the explanations of Artur Sakunts, Daniel Ioannisyan and Derenik Malkhasyan, who held the conference, who claim that Vahe Enfiajyan and his supporters hindered the process of the press conference and did not allow the speakers to finish their speeches.

Having this information and, as he stated ‘not having the possibility’ to get explanations from Vahe Enfiajyan and his supporters, the investigator decided, for unknown reasons, that there is no element of crime, given the fact that all the explanations indicate that the process of the press conference was hindered.

According to investigator A. Voskanyan’s opinion, there was no intention in the actions of Vahe Enfiajyan and his supporters, while the investigator could not clarify those circumstances with them. And he did not find elements of hindrance of the legal professional activities of a journalist (a crime envisaged under Article 164 of the RA Criminal Code) in their actions.

The decision made on October 2, 2018 not to initiate a criminal case will be appealed.