November 23. As of November 22, 350 Armenian servicemen’s corpses had been found or exchanged 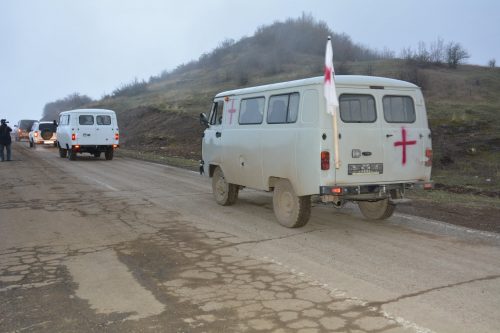 The Republic of Artsakh/Nagorno-Karabakh Human Rights Defender Artak Beglaryan reported that after the alerts were received, the identities of the persons forcibly disappeared were clarified and the data was transferred to the International Committee of the Red Cross and the relevant state bodies.

Yeghishe Kirakosyan, Representative of Armenia before the ECHR, reported that on November 17, an interim measure request was submitted to the ECHR against Azerbaijan  to take steps to protect the right to life of the 10 citizens who went missing on Goris-Shushi road on November 11 and to refrain from inhuman treatment towards them.

The European Court of Human Rights made a decision on applying an interim measure regarding 17 more servicemen held as POWs. This was reported by Artak Zeynalyan and Siranush Sahakyan who submitted applications to the ECHR on behalf of the families of POWs.

By RF peacekeeping contingent and International Committee of Red Cross mission and with the involvement of the Republic of Artsakh/NK  State Service of Emergency Situations, corpses of 350 Armenian servicemen have already been found or exchanged in the direction of Shushi, Martuini, Karmir Shuka, Mataghis settlements.

On November 17, Deputy Minister of Defence of the Republic of Armenia Gabriel Balayan received representatives of the delegation of the International Committee of the Red Cross in Armenia. The Armenian side presented a specially developed map showing the exact locations of the bodies of the killed servicemen, as well as the missing persons to the ICRC delegation, which, in an updated mode, will be provided to the ICRC delegation on a daily basis in order to carry out search operations more operatively.

The Republic of Artsakh/NK Human Rights Defender Artak Beglaryan reported on his Tweeter page that as a result of body exchange in Shushi, 3 Artsakh/Karabakh killed civilians were found with signs of brutal mutilations by Azerbaijan.

On November 17, the RA Human Rights Defender posted a video on the fact-finding work in Artsakh/NK. The video presents additional evidence on war crimes and crimes against humanity in the form of gross violations of the right to life, health, property and other rights of ethnic Armenians. Baroness Caroline Cox, member of the British House of Lords, also participated in the fact-finding activities. In Artsakh/NK, Mrs. Caroline Cox was accompanied by international journalists and experts. The Republic of Artsakh/NK Human Rights Defender also received her and presented data on war crimes by Azerbaijan.

The Republic of Armenia Human Rights Defender presented the USA Ambassador to Armenia facts on the Azerbaijani side’s atrocities against civilians.

The UN Working Group on the Use of Mercenaries and later also the High Representative of the EU for Foreign Affairs and Security Policy reaffirmed the use of foreign fighters by the Azerbaijani side and called for their immediate withdrawal from the conflict zone.

On November 12, a cooperation agreement was signed between the Human Rights Ombudsman of the Republic of Artsakh and the Institute for the Study of Human Rights at Columbia University (ISHR). The agreement launched a research project to publicize the war crimes committed by Azerbaijan.

The Republic of Armenia and Republic of Artsakh/NK Ombudsmen finished the 4th closed report on cruelties and atrocities committed by the Azerbaijani armed forces against captured ethnic Armenians and corpses and submitted it to the international bodies. The report refers to the period of November 4-18.

Since the start of the war, official sources have reported 56 Armenian civilians killed as a result of the Azerbaijani aggression.

See also: November 13. After the war unleashed by Azerbaijan against Artsakh/NK stopped, the process of exchanging the bodies of those killed has commenced