It is not known how the Government plans to reform and improve the Armed Forces, when published information often shows the reverse 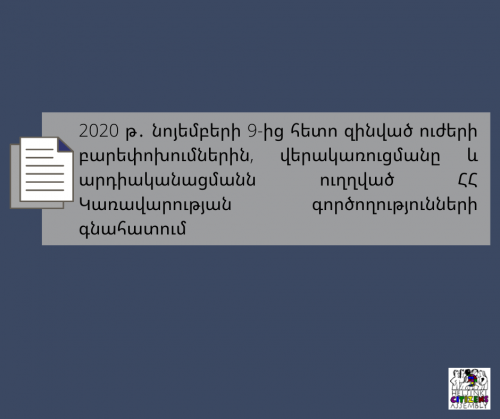 The public is not properly informed about actions aimed at reforming and improving the Armed Forces. The published information shows that the actions taken are not commensurate with the priorities declared.

Helsinki Citizens’ Assembly-Vanadzor has studied to what extent the Government implemented  actions concerning the Armed Forces and security issues formulated in the road map posted by Nikol Pashinyan on 18 November 2020 and five-year program of the Government on 18 August 2021. The Organization found out that the public is not provided with proper, complete information regarding the declared priorities and actions taken to achieve them.

While state bodies and officials regularly announce that they are implementing necessary actions aimed at reforming and improving the Armed Forces, combination of issues identified by priorities and the available information shows  that in certain cases there are obvious big gaps between  the declared goals, established actions, steps taken to achieve them and implemented actions.

On June 30, 2021, HCA Vanadzor addressed an inquiry to the Secretary of the RA Security Council to learn what actions had been taken and why they were not covered. On August 2, the Secretary of the Council of Security replied that everything was still in the discussion stage and they could not provide information.

HCA Vanadzor conducted this study based on public speeches of competent bodies and official information.

Thus, the following picture is compiled based on public speeches and publications about priorities declared by the Government’s five-year program of reforming the Armed Forces.

1․ Essential change in military service terms at the expense of increase in contractual service, gradual shift to a professional army.

While the shift to a professional army has been declared a priority, no relevant facts can be found in officials’ public speeches. Moreover, the Chief of the RA General Staff announced that “compulsory-term military service should be maintained”, without mentioning the terms.

2․ Increasing effectiveness of governance and management of the Armed Forces, implementation of legislative changes aimed at solving national security issues, review of the Strategy of the RA National Security, development of new military doctrines, introduction of a unified automated governance system.

While those actions have detailed formulations in the Government’s Program, there is also no information regarding implementation of this priority. In particular, it is not known what discussions and decisions there are in terms of developing a new strategy of national security, new military doctrine.

3․ Increasing effectiveness by improving organizational and staff structure of the Armed Forces.

Over the past 3 years, the incumbent of the RA Defense Minister was held by 4 persons, and that of the Head of the General Staff of Armed Forces was held by 2 persons, one of whom was appointed in that position twice.

Over the past 2 years, 19 officials of the General Staff were replaced, the majority of which was done after the 44-day war. 6 out of the recent 15 staff changes concerned military officials who signed the famous statement of the RA Armed Forces General Staff, whereby representatives of the Armed Forces demanded resignation of Nikol Pashinyan and the RA Government. While dismissal of the military who signed the statement can be attributed to the violation of the principle of political neutrality of the Armed Forces, it is completely incomprehensible why not all of the military who signed the statement have been dismissed.

No comments were made in this regard and it is unclear how those staff changes, in particular, change of the Minister of Defense and Chief of the General Staff, contributed to increasing effectiveness of the Armed Forces.

4․ Upgrading of armaments and military equipment.

In this regard, no information is available except meetings of security sector leaderships of the Republic of Armenia and Russian Federation. At least 18 Armenian-Russian meetings were held over the past year with the purpose of reforms and improvement of the Armed Forces, including upgrading of armaments and military equipment. In the frame of 10 of those meetings, high-ranking military officials from the RF visited Armenia, and RA military officials visited Russia in the frame of 8 meetings. These are only the meetings that were made public.

In addition to uncertainty regarding the extent to which those meetings addressed those priorities, there are also no visible actions in terms of using possibilities and resources of “other partner countries” (France, USA, Italy, etc.), as mentioned in the five-year program of the Government.

Nothing new is known in this regard. The only thing we can record is that exercise gatherings are still conducted by the mechanisms that were in place before the 44-day war, and the issues recorded in this frame evidence that there is a real need for change.

6․ Development of military education and science.

Despite announcements of introducing educational programs, there is no specific information as to the degree of their contribution to development of military education and science, and increasing the quality.

7․ There is no public information regarding information security and cybersecurity reforms,

while it was envisaged to establish a National Cybersecurity Center of Excellence by 2022.

8․ Implementation of actions towards raising the level of moral-psychological preparation of the Armed Forces.

This is one of the issues that HCA Vanadzor has been addressing for years on end.

No response has been given to HCA Vanadzor inquiry about the number of psychologist officers, since that would disclose confidential information as per competent bodies. No other information has been published.

HCA Vanadzor has been addressing this issue for years on end, too. In this regard, it is unclear what mechanisms would be applied, and increase of salaries is not systemic.

HCA Vanadzor has been addressing the importance of democratic and civilian oversight of the Armed Forces since 2012.

In this context, HCA Vanadzor also recommended establishing a special mechanism of human rights protection in the Armed Forces, i.e., the institute of military ombudsman, which the Government’s program does not address whatsoever.

As the facts show, actions aimed at this priority cannot be considered effective.

11․ Increasing the level of security of objects and infrastructure of military importance.

The fact that civilians and servicemen get lost on the territory and appear in territories under control of the Azerbaijani Armed Forces evidences improper strengthening of border military infrastructure in particular.

Officials, surely, make announcements about those actions, but again, they do not publish concrete information.

The five-year program of the Government also addresses more voluminous involvement of women in the Armed Forces, and corruption risks on procurements for defense needs.

Nothing new is published and known about more voluminous involvement of women in the Armed Forces, except for the mechanisms applied previously.

With regard to corruption risks, it is obvious that year-lasting corruption risks of the Armed Forces still have not been overcome, no mechanism was established for proper oversight of state procurements, particularly in the defense sphere, and prevention of conflict of interests.

There are initiated criminal cases, but it is not clear how they will progress. According to the study of the Transparency International Anti-Corruption Center, corruption risks are high in the defense sector of Armenia.

Thus, the public is not properly informed about actions taken for reforming and improving the Armed Forces, though these reforms are immediately and essentially related to security of citizens, protection of their rights, and yet, no results are visible in terms of the efforts made. Moreover, in some cases, there is an obvious gap between the declared goals and implemented actions.