Once again, we record that proper transparency regarding the provision of information on detailed conditions of fatalities in the armed forces is not ensured 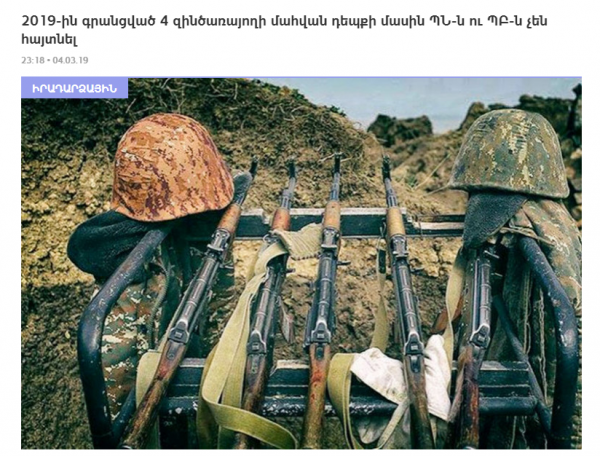 HCA Vanadzor finds it necessary to touch upon the statistical data regarding fatalities in the armed forces and the statement made by the Minister of Defense, according to which incidents can not be hidden, as well as the matters of alleged abuse of servicemen’s death cases by the RA Ministry of Defense spokesperson and later consideration of fatalities a manipulation by the RA Prosecutor General’s advisor.

On February 28, 2018, the Prosecutor General’s Office of the Republic of Armenia gave a similar response, regarding which HCA Vanadzor again presented its position and clarifications.

HCA Vanadzor finds that in any case, the defense agency is obliged to inform about servicemen’s death cases that occurred during or off military service irrespective of the causes.

It is important to note that since 2016, HCA Vanadzor has been recorded death cases about which no official publication was made, particularly,

Thus, we record once again that proper transparency regarding the provision of information on detailed conditions of fatalities in the armed forces is not ensured. Regarding the servicemen’s right to life, the government of the Republic of Armenia is responsible for ensuring their safe dignified service, as well as for conducting comprehensive, effective and objective investigation into each death case.

We exhort the RA Ministry of Defense and RA Prosecutor General’s Office to publicize information regarding each death case in the armed forces, act within the logic of properly complying with their obligations, provide the public with precise information on the human rights state in the armed forces, conduct investigation into death cases and their causes and conditions, find those who are guilty and bring them to liability.