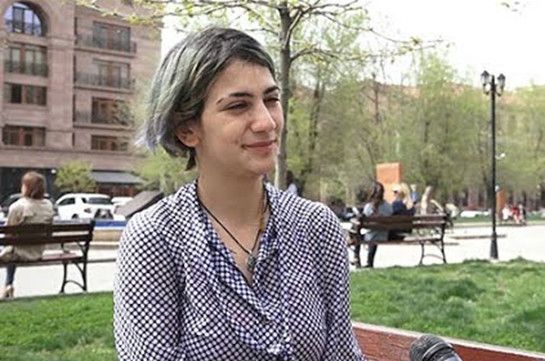 With the support of HCA Vanadzor, Asya Khachatryan – who got degrading treatment in the police of Artsakh in February, 2017 – appealed the decision on dismissing the criminal case accordingly initiated made by the Republic of Artsakh Prosecutor General’s Office special invsetigation department investigator of particularly important cases D. Dallakyan on December 7, 2018.

In February, 2018, Stepanakert police officers prosecuted Asya for 3 days on end, as Asya tells, because of non-standard appearance and smoking in the street. Police officers first approached Asya who was walking in the streets of Stepanakert late in the evening, required an identification document and during the following two days, they went to Asya’s apartment, searched it and took Asya to police department, where they treated her in a disrespectful manner, offended and applied violence, as well as did not provide a lawyer’s presence.

After the incident, Asya Khachatryan also made a report to the RA Prosecutor’s General Office.  The case is now examined by the RA Special Investigation Service. The injured party has no information pertaining to the process of the case examination. On January 9, Asya Khachatryan’s representative, HCA Vanadzor lawyer A.Zalyan applied to the body conducting the proceedings expecting to receive information. However, he has not yet got a reply.

It was mentioned in the complaint that the body conducting the proceedings did not conduct an objective comprehensive examination and thus violated Asya Khachatryan’s right to a fair trial.

Having information about physical and psychological violence applied to Asya in the police of Artsakh, the body conducting the proceedings took no measures to discover the perpetrators and bring them to liability.

Within the logic of those decisions, the body conducting the proceedings had to appoint medical and psychological expertises, organize confrontation, provide reasonable examination of the case, which would prevent the unlawful consent between the policemen who showed unlawful conduct.

Due to the improper examination, the act of the policemen was wrongly qualified, as it contained not only traits of abuse of official powers, but also those of torture.

Asya Khachatryan claimed that the Prosecutor General of the Republic of Artsakh give a legal assessment to the actions of the body conducting the proceedings, recognize null and void the decision-dated December 7, 2018- on dismissing the proceedings of the criminal case and to send the case to preliminary investigation.