The conduct of competent state bodies during call-ups, investigation of criminal cases initiated on evading conscription, appeals of decisions on conscripts and claims of compensation for the damage to early discharged servicemen’s health: analyses 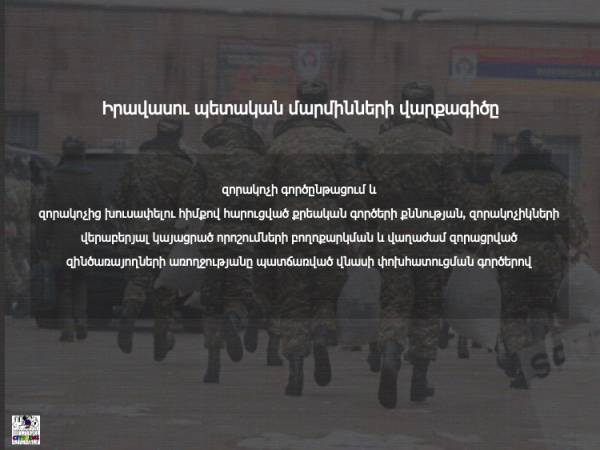 Helsinki Citizens’ Assembly-Vanadzor presents two analyses on the conduct of competent state bodies in the frame of legal aid provided to conscripts and servicemen.

The first one pertains to the conduct of state bodies during the call-up, the second one pertains to the investigation of criminal cases initiated on the basis of evading conscription, appeals of decisions on conscripts and cases of compensation for the damage to early discharged servicemen’s health.

HCA Vanadzor has been providing legal aid to persons subject to military enlistment, conscripts, servicemen and their family members since 2008. Coordinated data related to legal aid are available for 2010-2019, in the frame of which analysis was conducted.

During this period of time, HCA Vanadzor provided legal support to 764 persons. The main problem of servicemen, as well as conscripts, persons subject to pre-call-up and call-up, was related to health problems, among servicemen this was true for 72% and in the second group it was true for 75%.

In the frame of providing legal support to those persons, HCA Vanadzor deals with various state bodies.

During 2010-2019, problems pertaining to the following points were recorded in the conduct of military commissariats: proper notification of the call-up, prolonged queues to receive health state examination acts, expertise conclusions, enlistment in case of changing the military commissariat, as well as prolonged queues to undergo a medical examination.

Delayed answers or answers that skip the essence of the question are the main problem recorded in relations with the Ministry of Defense during call-ups.

The role of medical institutions is also big during call-ups. In many cases, they do not record the real health state of a conscript and do not provide samples of medical examination conclusions despite their obligations provided for by law.

The picture is different when it comes to private medical institutions.

The main problem with medical commissions of military commissariats is the violation of servicemen’s right to the privacy of their health state, when the examination is conducted in the presence of other persons, as well as not conducting a full medical examination for conscripts with more than one health problem.

As to the Central Medical Commission, it does not fully fulfill its obligations and often the CMC conclusions do not correspond to the diagnoses set by medical examinations, which results in decisions not favorable for conscripts.

The second analysis pertains to the investigation of criminal cases initiated based on the evasion of conscription, appeals of decisions and cases of compensation for the damage to early discharged servicemen’s health. It was conducted in the frame of legal support provided during 2016-2019.

In case of Garrison Investigative Divisions, the main problem is the initiation of criminal cases in all cases of evading conscription, without taking into account the reasons. The investigation is conducted with violations, moreover, despite the initiated criminal cases and reasons for not joining military service, conscripts are “exhorted” to review their decisions. Thus, they manifest a conduct typical of a body that secures call-ups.

During the process of appealing decisions regarding conscripts, in nearly all cases, the Ministry of Defense rejects further appealed matters and in this context the Ministry’s conduct has not changed essentially.

In the Administrative Court, the main problem of appeal process is the long timeframe of case examinations. The same situation is in General Jurisdiction Courts for cases of compensation for the damage inflicted to early discharged servicemen’s health.

It should be recorded that in case of certain bodies, there is positive progress throughout years.

Helsinki Citizens’ Assembly-Vanadzor presented recommendations regarding the eradication of problems discovered in the two analyses.

They are presented in the analyses along with other details.