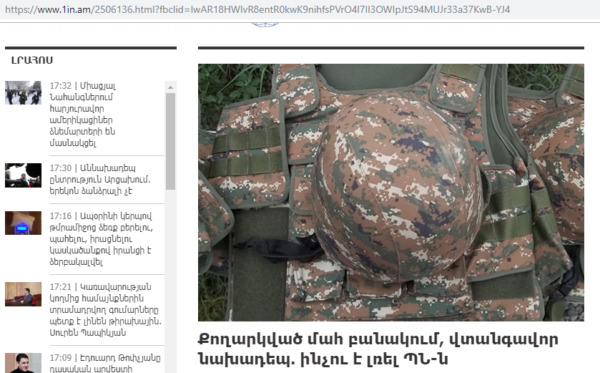 The day before, 1in.am, referring to tert.am, announced that on January 1, 2019, RA Defense Ministry contractual serviceman died as a result of a gunshot injury. However, official sources did not announce about the incident and this fact was qualified as “a dangerous precedent” by the media.

In this publication, 1in.am mentions that in the past, “the army was transparent for society” and makes conclusions stemming from this.

By the information of the media, a criminal case was initiated on inciting suicide. Taking into account the fact that 1in.am considers this a dangerous precedent and states that no such thing had happened earlier, we find it necessary to mention that Helsinki Citizens’ Assembly Vanadzor has been monitoring and publishing reports on fatalities in the armed forces for years on end. Representatives of the Organizations mentioned on various occasions that official sources do not inform about all the death cases in the armed forces and that it is worrisome.

At least during the last three years, in 2016, 2017 and 2018, HCA Vanadzor presented not only data available from non official sources, but also those from official sources, namely the RA Ministry of Defense, the RA Investigative Committee and the RA Military Prosecutor’s Office, from which it became clear that no information is disseminated on a number of death cases in the army.

After publishing the report on death cases in the armed forces of the Republic of Armenia and defense army of Nagorno-Karabakh in 2016, HCA Vanadzor found out as a result of additional research that besides 132 cases mentioned in the report, 13 servicemen’s death cases were recorded in the armed forces, about which no information had been published by official sources or media. Moreover, at least 2 out of those 13 cases were qualified as suicide/inciting suicide, the causes of 6 cases are not known.

In the report published earlier, 77 out of 162 incidents were caused by April war actions, 13 were qualified as suicide/inciting suicide and another 13 were murders.

After publishing 2017 report, we again conducted additional queries and received information from official and non official sources that besides 59 incidents mentioned in the report published earlier, 5 more cases were recorded, about 3 of which no information was disseminated even by media.

This regularity is worrisome and should not be continued by the new government. Society should be informed about every death case in the armed forces.