Expert Discussion։ “Restorative Mechanisms of Torture Victims` Rights in Armenia Within the Context of Transitional Justice” Problems and Suggestions June 26, 2019 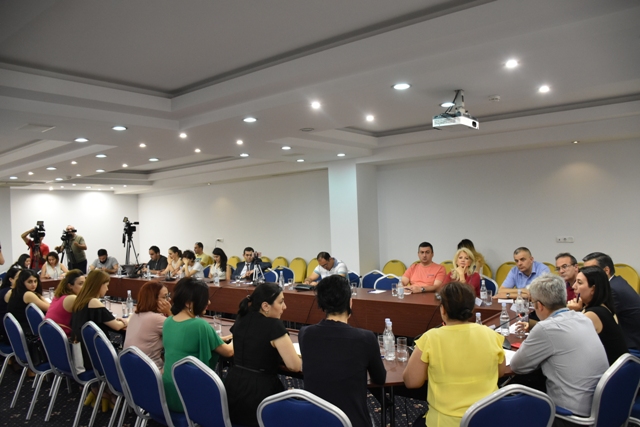 The Public Journalism Club in collaboration with the Investigative Journalists NGO, Helsinki Citizens' Assembly-Vanadzor, and the Georgian Center for Psychosocial and Medical Rehabilitation of Torture Victims organized an expert discussion within two projects: “A Public Glimpse into a Closed World։ The Human Rights Situation in Closed Institutions in Armenia,” funded by the European Union and Open Society Foundations-Armenia, and “Fighting Against Torture and Ill-Treatment in Georgia, Armenia and Ukraine,” funded by the European Union.

Participants presented cases of torture, cruel and inhuman treatment in Armenia; legislative and practical means of prevention; and mechanisms for restoring victims' rights within the context of transitional justice in Armenia. Currently, the National Assembly of the Republic of Armenia is preparing a plan for transitional justice. The Commission on Human Rights and Public Affairs is ready to accept recommendations of experts and civil society representatives aimed at restoring public solidarity. These recommendations are based on the fact that the ultimate goal of transitional justice is not to create punitive mechanisms, but to find mechanisms for the restoration of rights in line with restorative justice principles. Overall, efforts of the state to prevent torture or other degrading treatment in penitentiary institutions are still lacking, particularly in the case of detainee deprivation of contact and visits with family, which typically results from detainees’ lack of cooperation with preliminary investigation bodies. Experts consider it worrisome that courts often do not review investigators` decisions to deprive detainees of familial contact, resulting in the detainee being deprived of communications for years.

In this context, the following amendments are proposed in the legislation:

📌Apply it as an independent compulsory measure, carry out periodic review

There are numerous inhuman or degrading treatment cases within the penitentiary system because of the incompleteness of the independent medical center. The trust towards doctors is very low because the doctor is perceived as a penitentiary employee and, conversely, the doctor does not perceive a person within the penitentiary, deprived of his liberty, as a true patient. There have been cases of disclosure of medical secrets, serious issues related to the purchase and storage of drugs. People who have been deprived of their liberty have been given expired drugs, with no proper registration or control. After the death of a longtime hunger striker at the Nubarashen penitentiary institution in the beginning of 2019, the public monitoring group recorded that there was not a medical service representative in the penitentiary institution, even from the staff on duty. According to the monitoring group, there was a violation of Article 3 of the European Convention of Human Rights based on the living conditions of detainees and the lack of elementary sanitary conditions of the administrative staff.

📌Strengthen supervision in the sphere of Penitentiary Services, prepare proper training for doctors.

📌Pay attention to the social guarantees of penitentiary employees, such as salaries and working conditions, to incentivize effective implementation of the protection of detainee rights.

📌Have sufficient number of employees to ensure detainee rights, such as the right to walk and exercise.

📌Solve the problem of the insufficient number of psychologists in the penitentiary system.

According to the human rights defenders participating in the expert discussion, a deprivation of the hope of freedom is considered a violation of Article 3 of the Convention, in which conditional early release system has its own role. This particularly refers to those who are sentenced to life imprisonment. According to the case law of the European Court, life imprisonment may not coincide with biological death; it is considered a degrading treatment. The state is obliged to provide detainees with tools so that they can utilize their right to early release. Only one person sentenced to life imprisonment in Armenia has exercised this right in the last twenty years. There are a number of positive changes in the package prepared in 2018 to improve the situation of prisoners. A rule has been removed allowing the isolation of a lifelong detainee; soon, the opportunity will be available to move the detainee into an open regime. According to a representative of the Penitentiary Service, the court mainly rejects early release motions despite positive reports from the Penitentiary Service and the Probation Service. Hopefully, a new grading system will provide a flexible mechanism for the granting of freedom.

📌The expert community recommends during the period of imprisonment to carry out clear and consistent work, so that prisoner may exercise their right to early conditional release.

📌Demonstrate an individualized approach to a person deprived of liberty, carry out a behavioral risk assessment guided by a presumption of confidence in a person`s behavior

📌Eliminate the factors that objectively deprive a person of the opportunity to be integrated into society after release.

During the expert discussion, it was noted that according to the Special Investigation Service and the Prosecutor General's Office, from 2015 (when the Criminal Code was supplemented by Article 309.1 criminalizing torture) to 2019, 113 cases of torture by officials were investigated, from which 84 cases were closed and seven cases were suspended. Only two cases were sent to the court. Experts conclude that Article 309.1 does not serve its purpose; there are many instances where acts are not qualified as torture by law enforcement bodies but as abuse of official authority accompanied with violence. So, there is no clear understanding of the various forms of torture; people associate it only with violence. Moreover, even if the court has recorded the fact of torture or ill-treatment, in many cases restoration of rights becomes impossible because of the lack of official`s intentionality in the crime. (For example, a person is not provided with vital medication intentionally for the purpose of torture, but the drug is not purchased by the state through the procurement process).

📌So, compensation for non-pecuniary damage is becoming formalized by the legislation. The mechanisms of compensation and reparations are absent, which are enshrined in Article 14 of the UN Convention Against Torture.

📌To prevent torture, it is necessary to ensure effective investigation of cases, the discovery of the truth and the establishment of adequate punishment for perpetrators.

Numerous manifestations of cruel and inhumane treatment have been registered in psychiatric establishments in Armenia (six criminal cases have been initiated). According to the experts, the lack of personal space in psychiatric hospitals is considered inhuman treatment. Another important issue concerns voluntary or compulsory treatment. Because of lack of awareness, people are often moved to these institutions accidently and are subject to compulsory treatment. Juveniles who have become victims of property disputes are the most vulnerable groups. The current compulsory treatment procedure is problematic, which in general does not have procedural deadlines. Often people are subject to compulsory treatment without judicial act or supervision. There was a case when a person was forced to receive outpatient treatment and because of aggravation of the condition, it was necessary to replace outpatient with inpatient treatment, but the person was living in a psychiatric hospital for eleven months without a judicial act. It is suggested that:

📌Persons with disabilities or minors, regardless of the foster's or parent's consent, should have the right to express their opinion on their treatment and should have a clear mechanism for ongoing judicial oversight.

The Legal Department of the Ministry of Health has prepared a new edition of the Law on Psychiatric Assistance, in which the Ombudsman's recommendations regarding the expression of personal will concerning mental health problems will be taken into account. This new edition has already come into force. The issue of defining the procedure of physical restraint and medication calming by the same law is currently under discussion. The wording of the project is aimed at preventing all manifestations of human rights abuses. Soon the draft will be presented at the Government.

The experts also discussed the issue of torture, violence, and prevention of damage to human life or health in the RA Armed Forces. Journalists for Human Rights NGO presented the story of inhumane treatment of a Yezidi soldier with a mental disability. According to the NGO data, in another case, after Cassation Court recognized the fact of torture of a soldier, the case was sent to an investigation, but the new case was initiated on a non-torture basis and then was closed. It is necessary to ensure the following:

📌Correct and complete conduct of criminal cases, due diligence, disclosure of the truth

📌Preventive action by the proceeding body, MoD and military leadership.

There are serious problems with child abuse and inhuman treatment in various institutions ranging from police departments to care facilities. One of the special schools deprived children of lunch as punishment. In many institutions there are no record keeping mechanisms, and coordinated and unified state approaches are absent. Everything is left to the personal conscience of some professionals.

The experts refer to the guarantees of being protected from torture, from which the following is highlighted:

📌Overcoming the atmosphere of impunity in the country

📌Restoration of the rights of tortured persons during authoritarian impunity: Recognition of violated rights, psychological and physical rehabilitation of victims, material and moral compensation

📌Assessing the past in transitional justice, achieving public reconciliation

📌Creating governance systems that exclude torture and its manifestations

📌Experts have noted that although different strategies and documents are being developed, public intolerance towards torture is not yet visible.

The Armenian Survivors' Rehabilitation Center, which opened six months ago (provides medical, psychological and social support), noted that they have a low level of visits because people cannot identify what is torture or inhuman, cruel treatment. This, in turn, is connected with a high level of tolerance towards aggression (the public normalizes these phenomena). The Center also recommends paying close attention to the rehabilitation of the torturer and to the improvement of his value system in order to prevent the cycle of aggression. This is also important from the perspective of providing a human-centered approach of transitional justice. Experts believe that it is the State's responsibility to take care of disclosing, directing, preventing and raising awareness of these cases.

The basis for this summary was the Public Expert Discussion on “Creation of Mechanisms for the Restoration of Torture Victims` Rights in Armenia in the Context of Transitional Justice,’’ held on June 26, 2019.