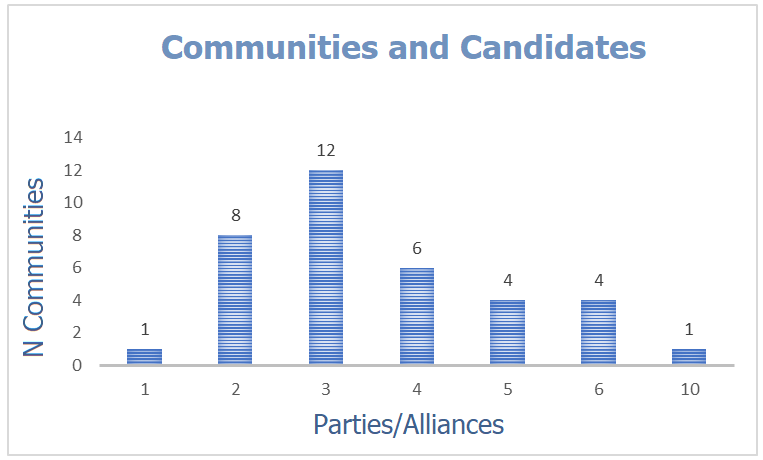 A total of 17 parties and 27 alliances were nominated in 36 communities.

Ten of the 27 nominated alliances were named after the first number of the alliance, which, in fact, is in contradiction of the logic of the proportional electoral system.

During the long-term monitoring, 59 campaign meetings were monitored, during which interviews were conducted with 78 participants. Interviews were conducted with 158 candidates for the Council of Elders, as well as with the chairpersons and secretaries of the Territorial Electoral Commissions in charge of organizing the elections, 42 chairpersons, secretaries and members of Precinct Electoral Commissions.

Forty-two incidents were registered, on the basis of which 2 crime reports were sent to law enforcement agencies.

Local elections on December 5 were the largest following the amendments to the Electoral Code. Given the number of communities involved, the election campaign had significantly different manifestations, depending on this or that community, the nominated parties and alliances, the candidates and the administrative and financial resources at the disposal of the parties/alliances.

In a number of communities, the preferential distribution of community budgets under the name of various social programs and support had a significant impact. It is noteworthy that during the snap parliamentary elections criminal proceedings were instituted for carrying out the same actions, but no action was taken during these elections.

The abuse of administrative resources in Artik and Artashat communities was expressed by providing bonuses to supporters.

During the campaign, the state and communal authorities greatly speculated on the subsidy programs (for example, asphalting works in Vanadzor, Artashat, procurement of property, etc.), and sometimes projects implemented by other institutions (for example, the grand opening of a renovated stadium in Armavir). During the campaign, the Vayk community municipality disseminated information about the acting mayor organizing asphalting works, acquiring property for the community and other activities at his expense, which was both a misuse of community media resources and a prohibited combination of campaign and charity.

In the case of community leaders who did not belong to the ruling party, the availability of administrative resources and business opportunities were essential tools, especially being a large employer at the community level (for example, in the case of the Karen Yeghiazaryan Alliance in Aparan).

One of the problematic cases of the pre-election period was the alarms about violations of labor rights for political reasons, imposing administrative penalties or simply dismissal by employers. Although unique cases in this category are made public, most of them remain unreported, making it virtually impossible to protect a person’s rights.

One of the key issues identified during the observation mission was the tendency to avoid financial accountability and transparency. In interviews with candidates for the Council of Elders, the vast majority of them claimed that all the staff of the election headquarters were involved on a voluntary basis, while the staff stated that they were paid. Candidates who mentioned that the employees were paid rarely stated that the expenses were covered by the pre-election fund.

There were patterns in the self-withdrawal of candidates in different communities, from which it can be concluded that in some cases the inclusion in the pre-election lists was merely done to ensure a quota so that the given party/alliance could participate in the elections.

As in the previous two local elections, the recent Nagorno Karabakh war was manipulated by both sides, and the short-term clashes on the Armenian-Azerbaijani border on November 16 also affected the campaign.

It should be noted, however, that due to both the above-mentioned circumstance and other objective and subjective factors, the election campaign did not take place in several communities or was organized very superficially, although there was actual competition and involvement of different parties. For example, in Spitak, Pambak, Tumanyan, Ashtarak, Baghramyan, Khoy, Metsamor, Vardenis, Garni, Tsakhkadzor, Hrazdan, Nairi, Nor Hachn, Ashotsk, Jermuk, Vayk communities, there were no public campaigns, rallies or other similar activities during the monitoring period.

The short-term mission conducted a permanent observation of 143 out of 984 polling stations formed in the above-mentioned communities from 07:00 on December 5, 2021 until the end of the vote tabulation process. There were 43 mobile observer groups in those communities. During the voting, the mobile groups visited 254 out of 621 towns/villages of 38 consolidated communities and 392 precincts of those towns/villages. The work of 23 Territorial Electoral Commissions in charge of the elections of the above-mentioned communities was also observed after 20:00.

Although there were unique procedural irregularities during the sessions of the commissions, the presence of multiple proxies of the same parties or alliances in the precinct center, as well as their simultaneous registration in the register, were the leading and persistent problems during the voting day. In this respect, the ignorance of the PECs and parties was widespread (and probably due to different regulations for parliamentary and local elections).

The main violations recorded by the observers in the polling stations observed during the voting were as follows:

In addition, there were isolated cases when:

The main issues registered during the vote count:

Simultaneous entry of more than one person to the voting booth was registered in 24.4% of the observed polling stations. Possible abuses of assisted voting mechanism were observed in 82.5% of polling stations observed.

The voting procedure was not always presented to the voters in 25 of the observed polling stations. However, the high number of cases of voting outside the voting booth and interference from other persons makes is clear that the key principle of voting, the secret ballot, was ignored, and the commission must take steps to better explain the voting procedure and ensure that voters vote alone, independently, using a magnifying glass or other supportive measures to minimize the need for other people to assist. Observers reported that in 118 of the 143 polling stations observed, some voters found it difficult to vote. Although the CEC and some NGOs conduct public awareness campaigns, these efforts are clearly insufficient.

It is noteworthy that two cases of violations of observers’ rights took place in the polling stations where the commission members had consumed alcohol (in Ddmashen and Shenik). Another case of alcohol use was observed in Gavar.

The commission of 16/37 polling station in Shenik village stands out in this regard, the members of which, being under the influence of alcohol, did not hesitate to contact the relatives of the observer in order to put pressure on him.

During the election campaign, the period of preparing voter lists and on election day, some actions by law enforcement agencies were problematic.

In particular, during the election campaign, law enforcement agencies did not take appropriate steps to properly investigate violations of the election campaign procedure. It was especially problematic that the police and investigators did not take any tangible steps to disclose the cases of the governor organizing a swearing-in scuffle at the headquarters of a rival party in the Garni community of Kotayk Marz, and the Civil Contract Party combining campaign and charity activities in the Vayk community of Vayots Dzor, and bringing the guilty to justice.

In terms of preparing voter lists, the inclusion of individuals outside of the main voter lists was problematic in a number of communities. The case of the difference between the data of the electronic registration device and the printed list in the Shirak Province was most problematic and subject to further investigation by the police.

Cases of police misconduct were reported in a number of polling stations on election day. There was also a case when representatives of the opposition were detained by the police in Ararat province on obviously groundless allegations.

The local elections on December 5, 2021 were the third elections to be held under a modified electoral system.

We find that the violations registered in most of the communities did not have a significant impact on the free expression of the will of the voters, they reflect the will of the voters, and the elections meet the criteria of free and fair elections. However, it is problematic that in some communities there was virtually no competition or that competition was not fair due to the misuse of administrative and financial resources.

We believe that the electoral traditions at the local level should be significantly improved in terms of promoting political debates, establishing a dialogue and creating an atmosphere of mutual respect between the opposing forces. And the electoral legislation needs to be significantly improved in order to neutralize competitive advantages due to the misuse of financial, economic and administrative resources.

The project “Elections4All2021 – Domestic Observations and Citizens Empowerment by Civil Society” is implemented in cooperation with the OxYGen Foundation, the Helsinki Citizens’ Assembly Vanadzor Office, the Union of Informed Citizens NGO and the Yerevan School of Political Studies.

The project is funded by the European Union.