The risk of irreversible damage remains too great and real. HCA Vanadzor applied to the ECtHR in the frame of serviceman Ara Ghazaryan’s case, who is under arrest in Azerbaijan 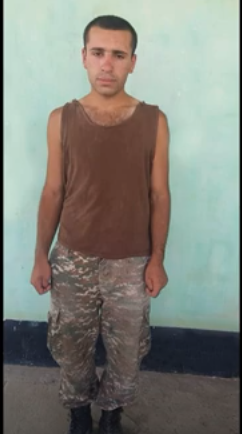 Ara Ghazaryan is an Armenian serviceman, who has been kept in Azerbaijan since August 2019. Since then, Ara Ghazaryan’s mother Karine Mnatsakanyan has not had any information on her son’s whereabouts, grounds for keeping him under arrest and the conditions where he is held. Moreover, having the bitter experience of ill-treatment towards Armenians in Azerbaijan, she sees direct threat to her son’s physical security and doubts the conduction of proper trial of his case in Azerbaijan and his release.

Let us remind that according to official information, Ara Ghazaryan was last seen on the territory of Armenia on 12 August 2019. It is presumed that on the same day, at around 12:00 o’clock, he got lost near the border of Nagorno-Karabakh and Azerbaijan, where the borderline is very vague. There, he accidentally entered the territory under the control of Azerbaijan and got arrested by Azeris.

According to the available information, since his detention on 12 August 2019, Ara Ghazaryan has been kept under arrest in the territory of Azerbaijan, without a possibility to communicate with the outside world as ordered by the authorities of Azerbaijan or by a secret agreement․ Since that day, he has kept in touch with his family only via letters transmitted by the Red Cross. There is no exact information on his whereabouts and conditions of arrest.

Concerned about her son’s security under direct threat in Azerbaijani captivity, Karine Mnatsakanyan applied to HCA Vanadzor on 17 February 2020. The Organization’s advocates Arayik Zalyan and Ani Chatinyan applied to the European Court of Human Rights (ECtHR) in order to initiate (urgent) temporary (interim) measures envisaged by Rule 39 of the Rules of Court.

HCA Vanadzor advocates substantiated the urgency of the application by a number of conditions. Taking into account the conflict between Nagorno-Karabakh and Azerbaijan, the fact that A. Ghazaryan was arrested in Armenian military uniform on or near the territory under control of the Azerbaijani authorities, as well as precedents of cruel treatment towards Armenians arrestees by Azerbaijani authorities, the serviceman’s mother expressed her worries that since his detention, her son had been under the risk of great irreversible damage in the context of exercising the rights envisaged by Article 2 and Article 3 of the Convention.  So, on 12 August, a video was uploaded on Youtube.com, where Ara Ghazaryan shows his body injuries, namely, a burning-like injury on his hand, which is likely to have been caused as a result of extinguishing a cigarette on his finger, the hematoma on his head, as well as many scratches and wounds  on his feet. Besides, in the application addressed to the ECtHR, HCA Vanadzor advocates also mentioned other cases of ill-treatment in Azerbaijan. In particular, 77-year-old Mamikon Khojoyan got lost on the border area of Azerbaijan and Armenia and died in hospital on 20 May 2014, having received injuries during captivity in Azerbaijan. Khojoyan was detained in January 2014 and released in March of the same year, and though he was immediately transferred to hospital, no information was published in regard to the fatal injuries that he had received during the whole period of captivity until his death on 20 May 2014.

Neither the serviceman’s mother, nor his family members have direct contact with Ara Ghazaryan. The only information on his whereabouts is given through his letters that are transmitted to his family through Azerbaijani Office of the Red Cross. The latest letter was received on 20 February 2020. None of those letters sheds light on Ghazaryan’s whereabouts or health state.

In the application addressed to the ECtHR, the threat of violation of the right to life, torture, inhuman or degrading treatment was substantiated.

On behalf of Mnatsakanyan, HCA Vanadzor advocates requested the Court’s relevant division or chamber’s president or the duty judge to impose to the Government of Azerbaijan a requirement to implement immediate measures. The Court made a decision on the interim measure. Thus, in Mnatsakanyan v. Azerbaijan case no. 15434/20, on 2 April 2020, the Court instructed the Government of Azerbaijan to initiate all the necessary measures, in accordance with Rule 39, to protect the applicant’s son’s, i.e. Ara Ghazaryan’s life and physical integrity.  In accordance with Rule 41, the Court also decided to give priority to the application of the Organization’s advocates and request the Government of Azerbaijan to provide information in accordance with Rule 54 §2(a). The Court also gave the defenders of K. Mnatsakanyan’s interests time until 30 April to present a complaint, which was done.

The ECtHR gave the Government of Azerbaijan time until 14 May 2020 to present all the inquired documents translated into English.