198,091 persons were considered as undesirable in the RA in the last 10 years

We were informed about this through the letter sent by M. Khachatryan, Head of the Staff of the RA National Security Service, on August 9, 2018, in response to HCA Vanadzor.

It should be noted that HCA Vanadzor requested information on the number of the persons included in and withdrawn from the databank of foreigners declared undesirable in the RA from 2000 to date and the grounds for including them in the databank.

The NSS provided information only starting from 2009, giving the argument that it was impossible to provide information on the previous years for technical reasons, and did not address the grounds for including data at all.

It should be recalled that French-Armenian public figures Alexander Varpetyan’s and Jean Baptiste Ozkirisyan’s (Shant Vockerchyan) data were entered into the databank of persona non grata in the RA. HCA Vanadzor undertook the defense of their rights and, following a judicial appeal, their data were withdrawn from the databank of foreigners declared persona non grata in the RA.

In both of the cases, no clear grounds were indicated for entering the persons’ data into the databank; the RA NSS maintained that there were “reliable data” indicating that their activities might pose a danger to the security of the RA. The NSS did not declassify what “reliable data” they were even after withdrawing them from the databank.

The numbers of persons whose data were entered into and withdrawn from the databank of foreigners declared undesirable in the RA are presented below according to years. 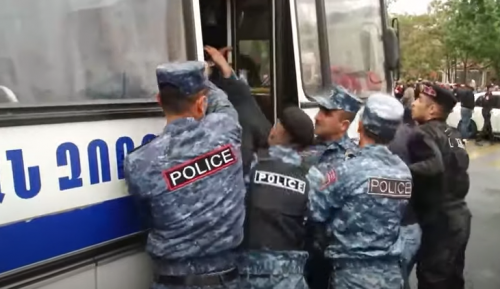