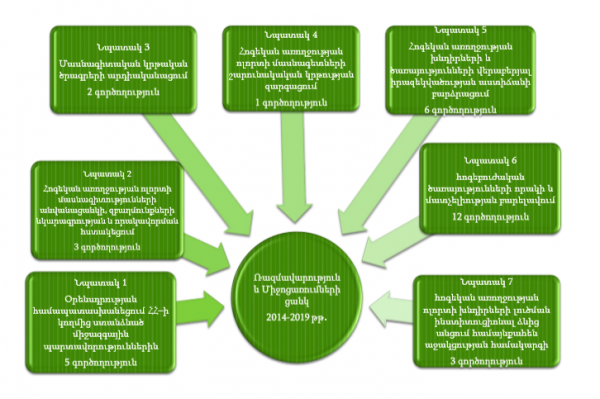 That was the first comprehensive document aimed at securing the rights of persons with mental health problems. It included measures aimed at legislative reforms, securing the human potential, education of specialists, provision of mental health services, raising awareness of the public.

In this report, HCA Vanadzor presents the results of the monitoring of the implementation of 2014- 2019 Strategy of Maintenance and Improvement of Mental Health in the Republic of Armenia. The interim results of the monitoring of the actions ensuring the implementation of the strategy were published in 2 reports, namely, the report summing up 2014-2015 and the report summing up 2014-2016.

The full report is available HERE

Welcoming the development and approval of the strategy of mental health maintenance and improvement with the involvement of different interested parties, based on the results of the implementation of the Strategy, we record that it was not implemented in a timely, effective and complete manner.

According to the monitoring results, the actions taken in order to implement the list of the actions for the implementation of the Strategy did not lead to the achievement of the established aims. Thus, for example, the legislative field was not made compliant with the  obligations undertaken by the Republic of Armenia. In particular, the legislation regulating the field continues to be comprised of provisions contradicting the international standards. Besides, a comprehensive law on the maintenance of mental health was not developed.

Accessible, affordable and quality mental health services and community-based services in accordance with the needs were not provided, either. The work aimed at introducing psychiatric services into the general healthcare system was not effective. Factually, a psychiatric department was established in only one of the multiprofile hospitals, while the primary healthcare circle was not made in line with the need of early discovery and treatment of diseases or relevant referral. Necessary differentiated services were not established for children, teenagers and the elderly, including as a result of the cancellation during the implementation of the Strategy.

The envisaged community-based services were not introduced, either. The effectiveness of the provided services was not assessed and further directions were not developed.

In terms of the guarantees of proper provision of mental health services, the work undertaken for the involvement of specialists, as well as capacity building work was not effective and targeted, either. The same is true for the work aimed at awareness- raising, as it did not stem from modern approaches and did not involve all the interested parties. The implemented actions were mainly of the same content and traditionally continuing.

Also, recommendations were presented in regard to the issues recorded in the report.