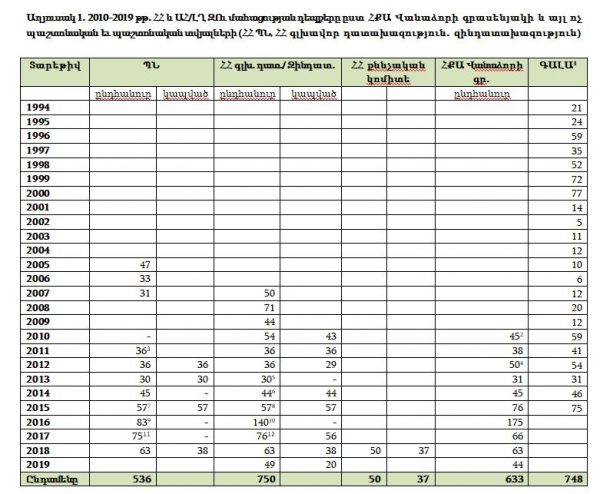 Presenting observations, the Prosecutor’s Advisor mentioned, “Compared to last year, death cases in the Armed Forces have decreased by 14 or 22%. Death cases immediately related to military service have decreased sharply by 18 or 47%.

Thus, the Organization counts death cases in the  armed forces based on the condition of being in the military service, and no reasoning is acceptable for not informing about death cases, which we have recorded many times.

Taking into consideration RA Prime Minister Nikol Pashinyan’s announcement regarding the “historical minimum” of death cases, we shall record that as compared to 2019, fewer death cases were also recorded in 2011, 2013, 2014.

Nevertheless, besides the statistical data, we also find it necessary to touch upon the changes made in the armed forces after the Velvet Revolution.

Besides the publicly presented actions aimed at improving the quality of servicemen’s clothes and food, life sustenance and safety conditions at combat duty places, no steps were taken regarding any concept and strategy of rising the efficiency of civil oversight over the armed forces, reduction of corruption risks in the sphere of purchase, healthcare state, maintenance of statutory relationship, military discipline in the armed forces. Under these conditions, even the decrease in the number of death cases cannot be considered as an indicator equal to the solution of systemic problems recorded in the armed forces for years on end. Taking into account that even in 2013, the number of death cases (31 persons, 30 persons according to official data) was lowered to a historical minimum due to great administrative efforts, that fact was not a guarantee for not recording a further sharp rise of the number of death cases, which was connected with the absence of systemic changes in the armed forces and effective civil oversight over the armed forces.

It should also be stated that effective investigation into the death cases in the armed forces is not ensured, either, and systemic approaches to the eradication of causes of death cases continue remaining unformulated and unimplemented.

See causes of death cases according to years in the document enclosed.