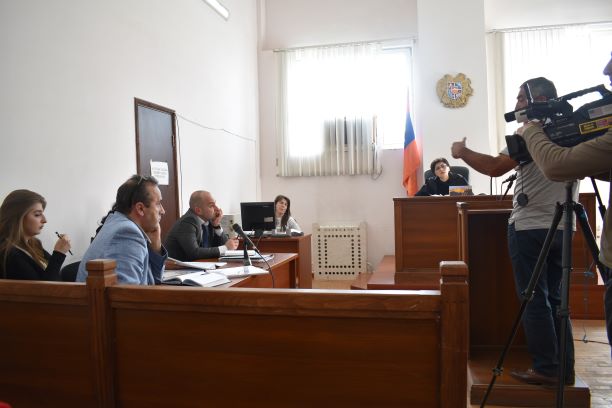 On October 2, 2018, General Jurisdiction Court of Lori Region continued the investigation of the case of hindering professional activities of Narine Avetisyan – editor-in-chief of Lori TV company.

It should be reminded that the incident took place on September 28, 2017, when Narine Avetisyan tried to shoot asphalt pavement under heavy rain on the bridge near the Church of the Holy Mother of God (St. Astvatsatsin Church) in Vanadzor.

An accusation has been filed against Shinplus construction company head Tigran Nazaryan and employee of the same company Vrezh Khachatryan for committing an action envisaged in Part 1 of Article 164 (“Obstruction of legitimate professional activities of journalist”) of the RA Criminal Code.

The protection of  Narine Avetisyan’s rights was undertaken by Hesinki Citizens’ Assmbly Vanadzor. The head of the organization Artur Sakunts and lawyer Syuzanna Soghomonyan are her representatives in the Court.

Before their interrogation, the Court asked journalist Ed. Arzumanyan to leave the room, as the latter was also a witness of the case and had not been interrogated yet.

In her testimony, Narine Avetisyan presented the details of the case. She mentioned that getting informed by The Armenian Times journalist Ed. Arzumanyan that there was asphalt pavement ongoing work under heavy rain, she hurried to the scene and tried to shoot the process with her mobile phone, but her activity was hindered. Narine Avetisyan emphasized that she introduced herself as a journalist for several times and had a certificate proving it, but the people who applied violence to her did not pay attention to that fact and using curse expressions demanded that she left, then seized her phone with violence, left her fallen on the street and went away.

The Court and the parties asked questions about the victim’s testimony. In response to them, Narine Avetisyan presented certain episodes of the incident in a more detailed way.

The parties did not see the need to publish the preliminary investigation testimony of the victim.

The next person to be investigated was Yurik Gasparyan. At first, he announced that he remembered almost nothing from that day, but then he presented incoherent information about the incident. He also answered the parties’ and the Court’s questions. Based on this, it became clear that there were obvious contradictions between the preliminary investigation testimony and the one given in the Court.  At the request of the parties, the preliminary investigation testimony and the testimony given during face-to-face interrogation were publicized. It turned out that there were contradictions between this two, as well.

Through questions, the Court and the parties tried to find out which of them the witness considered credible.

Having received the testimonies, the Court discussed the application presented by the defense party stating that defendant Tigran Nazaryan was to have a working visit to Italy during the period of October 7-11, 2018.  Having read the documents presented to the Court, the victim side and the prosecutor announced that there was no invitation in the name of Tigran Nazaryan enclosed in the documents, therefore, the application could not be upheld. The Court was unanimous and rejected the application.

At this point, the court session finished. The next session was scheduled 2:30 p.m. on November 2, 2018. The Court will continue the hearing of the case witnesses.