November 6. Since the beginning of the war, the use of artillery and chemical bombs by the Azerbaijani armed forces resulted in destroying more than 2000 hectares of forests and vegetated area in the Republic of Armenia and Republic of Artsakh/NK 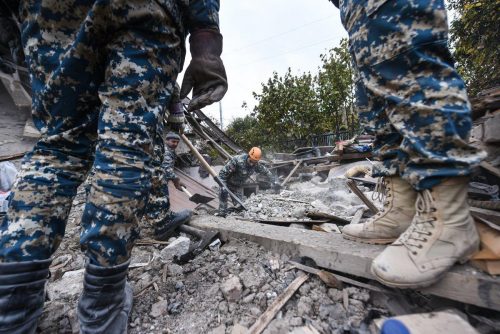 The Armenian Unified Infocenter reported that during the night of November 5 and the early hours of November 6, multiple attempts by Azerbaijani offensive units on Shushi were repelled. The adversary also has serious losses in Artsakh/NK southwestern front, near Berdzor. During the whole day, Azerbaijan launched artillery and missile strikes on peaceful settlements and civilian infrastructure in Artsakh/NK. Civilians have been affected.

As the Center reported, the Azerbaijani-Turkish forces kept Artsakh/NK Shushi and Stepanakert cities under intensive fire throughout the night. Azerbaijan targeted residential buildings, civilian and public infrastructure. As a result of missile strikes, several residential houses were set on fire in Shushi. 3 civilians were killed in Stepanakert.

The RA Ministry of Environment reported that as a result of Azerbaijani forces shelling and using chemical bombs in forest territories, more than 2000 hectares of forests and vegetated area were destroyed in Armenia and Artsakh, including in specially preserved nature territories. In the frame of UN-declared International Day for Preventing the Exploitation of the Environment in War and Armed Conflict, the RA Ministry of Environment once again called on all major international environmental structures, secretariats of international conventions to take urgent actions to stop the ecocide implemented by Azerbaijan in the Republic of Armenia and Republic of Artsakh/NK territory and to hold liable, in the strictest manner, the side using banned weapons and means.

In an interview given to 24news on October 30, RA Human Rights Defender Arman Tatoyan mentioned Azerbaijani sources of social networks send videos and photos of war cruelties to Armenian pages and private users, in parallel spreading hatred towards ethnic Armenians. The alarms made to the Ombudsman and their daily investigation show that the above-mentioned videos and photos are sent as a separate message and accompanied by utmost cynic attitude  and threats. Hatred towards Armenians is encouraged in Azerbaijan at state level.

The Human Rights Defender of the Republic of Armenia published an ad hoc report on Azerbaijani military attacks against the peaceful population of Davit Bek and Agarak villages of Syunik province of Armenia. According to the report, the Azerbaijani armed attacks resulted in damages of 38 residential houses, 2 barns, 20 cattle, 5 vehicles. Gravestones in the village were also damaged. One civilian was killed and 2 civilians were wounded (one of them with serious injuries).

The RA/NK Ombudsman posted a video from the area of the residential house bombed by the Azerbaijani armed forces in Stepanakert on November 6. He stated that the use of heavy artillery by the Azerbaijani armed forces against civilian settlements resulted in the collapse of the residential house, 3 civilians, namely, an elderly woman and her grandchildren, killed. He called on the international community not to be blind and mentioned that Azerbaijan and Turkey continue targeting Artsakh/NK civilian settlements and committing war crimes.

Artsakh/NK Human Rights Defender received a member of Parliament of Spain Jon Inarritu. The Ombudsman briefed them on the consequences of the humanitarian catastrophe in Artsakh as a result of the Azerbaijani aggression, as well as the facts on atrocities and war crimes committed by the Azerbaijani armed forces, collected during the Ombudsman’s fact-finding mission.

In his conversation with Armenpress, the RA/NK Ombudsman said that the death toll among the civilians rises. He also has information on the killings of civilians in settlements under Azerbaijani armed forces’ control.

The RA Ministry of Education, Science, Culture and Sports made a post in their Facebook page, stating that today Azerbaijan shelled Artsakh/NK Tigranakert’s archeological camp.

The Ministry mentioned that once again Azerbaijan grossly violates the international law norms, as well as obligations undertaken in the frame of the UN and the Council of Europe.

Highlighting that deliberate destruction of cultural heritage sites is a war crime, the RA MoESCS strongly condemned this yet another manifestation of Azerbaijan’s vandalism and drew the attention of UNESCO and other international organizations engaged in the protection of cultural values to what has been happening. The Ministry further called on the above-mentioned organizations to firmly and decisively condemn the ongoing Azerbaijani aggression, which threatens the Armenian cultural heritage and pushes it to the verge of destruction.

To date, overall 53 civilians have been killed in the Armenian side as a result of the Azerbaijani aggression.