November 2. The use of phosphorous weapons by Azerbaijan may lead to a serious ecological danger not only in Artsakh/NK, but also the region 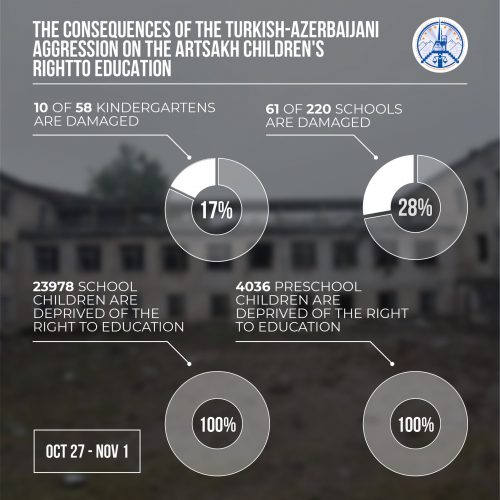 The Armenian Unified Infocenter reported that during the night of November 1- November 2, air raid siren was regularly on in Stepanakert due to the Azerbaijani air force appearing in the sky of Stepanakert. Azerbaijani armed forces regularly carried out artillery and missile strikes on civilian settlements. Martuni and Martakert were bombarded. Grad and Smerch MRL systems were used to strike peaceful settlements and combat aviation was deployed resulting in destructions and material damage among the peaceful population. The Azerbaijani armed forces kept Shushi under fire throughout the night.

The RA Human Rights Defender posted a video, reporting that feasts, surveys, polls encouraging killings and cruel treatment of Armenians are organized in Azerbaijani social media, then happiness and pride spread for committed atrocities; other forms of hatred towards Armenians is largely encouraged. Armenia’s Human Rights Defender’s Office obtained evidence confirming all the mentioned facts. For example, a photo of a beheaded body is posted in this Azerbaijani social network channel claiming that this is an Armenian soldier and a poll is organized with exceptional cynicism and intention of incitement to hatred.  The Human Rights Defender's Office of Armenia has duly documented all these publications and will send them to relevant international bodies.

Zara Amatuni, Head of the Communication Programs of the ICRC in Armenia, reported that he body of civilian, 84, who had been taken captive by the Azerbaijani side, has been transferred to the Armenian side with the assistance of the ICRC. With the support of the Red Cross, the body of the elderly citizen has been transferred to Armenia through the territory of Georgia.

The Armenian Unified Infocenter reposted a Facebook post by Martuni Region Nngi Village Head, “For the third day, forest cover belonging to our community is on fire because of the adversary’s use of white phosphorus. This includes an area of 150 hectares. The adversary continually targets Nngi and its neighboring communities. Fortunately, today’s shelling has not resulted in any human losses”.

Earlier, the Republic of Artsakh/NK Human Rights Ombudsman Artak Beglaryan presented the humanitarian situation in Artsakh caused by the Azerbaijani aggression during a meeting with Georges Dalman, Member of the Chamber of Representatives of the Belgian Federal Parliament. Artak Beglaryan spoke in detail about the consequences of Azerbaijan's deliberate and indiscriminate targeting of civilian communities in Artsakh, as well as the cases of inhumane treatment of Armenian prisoners of war and the bodies of killed soldiers, which are summed up in the reports published by the Ombudsman. The Human Rights Ombudsman noted that although considerable fact-finding work is being done on the humanitarian catastrophe, the presence of international partners, parliamentary bodies, and human rights organizations is very important for carrying out a fact-finding mission on the ground.

The Minister of Environment Romanos Petrosyan addressed a letter to the Executive Secretaries of Environmental Conventions, international organizations and partners to draw their attention to the ongoing large-scale military aggression initiated by Azerbaijan, supported by Turkey and foreign mercenaries, “On October 30th, Azerbaijani armed forces committed yet another war crime against the people of Artsakh using incendiary weapons containing, what is most likely, white phosphorus or thermite substances․ The large-scale air-delivered incendiary munitions attack occurred over mountainous forested areas near civilian settlements of Shushi, Mataghis and Askeran. It can cause irreparable damage to the environment ranging from large-scale forest fires to persistent pollution of air, soil, water and poisoning of flora and fauna. It is important to note that these particular areas are a habitat for rare and endangered species included into the Red List of plant and animal species of Artsakh, as well as species included into the IUCN Red List such as Panthera Pardus saxicolor, black and griffon vultures, Ursus arctos etc. These deliberate attacks were aimed at causing harm not only to civilians and armed forces seeking refuge in the forested areas of Artsakh/NK, but were also targeting the ecosystem of the area intending to cause massive forest fires as well as devastating destruction and pollution of the local ecosystem.The international community must condemn the perpetrators of such war crimes, bring them to justice and prevent any further potential large-scale attacks of this nature. This is even more pressing today because with each passing day the Azerbaijani regime is increasing the scope of attacks and adding new and more dangerous weapons to the list of those used in Artsakh/NK, hence increasing the irreversibility, severity and range of humanitarian and environmental catastrophes. We call on you to act decisively in putting pressure on Azerbaijan and force Baku to stop the aggression and perpetration of war crimes. We call on your organizations’ responsibility to protect valuable ecosystems to prevent possible ecocide on the territory of Artsakh Republic/NK”.

50 Armenian and foreign organizations issued a joint statement to 100 international environmental organizations, strongly condemning the use of phosphorus munitions by Azerbaijan in the forests of Artsakh/NK, environmental public initiative reported. The list of influential environmental organizations and conservationists includes the International Union for Conservation of Nature, Greta Thunberg, the Brigitte Bardot Foundation, the International Fund for Animal Welfare, the Leonardo DiCaprio Foundation, and other reputable structures. By the statement they called on the organizations to give a proportional response and invest all the efforts to preserve the valuable ecosystem of Artsakh/NK as a universal natural heritage, populations of rare species and then current genetic resources against the threatening ecocide. They remind that organizations that the environment protection does not know any political or military borders and the use of white phosphorus in such a biodiversity-rich region could lead to environmental disaster throughout the entire region.

The Representative of Armenia before the ECtHR made a statement that the Armenian Government has submitted new evidence to the European Court of Human Rights substantiating Azerbaijani Government’s failure to comply with the decision on 29 September 2020 on applying interim measures under Rule 39. The Government has informed the Court about the complete ignorance of the agreement reached in Geneva on 30 October 2020 and the usage of the cluster and incendiary weapons towards civilians and civilian settlements by Azerbaijani armed forces. The Government has provided photo and video footage of the shelling of Martuni, Martakert, Shushi, Mataghis, Askeran, and the capital of Artsakh Stepanakert. Furthermore, the Government has also submitted credible evidence of the usage of Syrian mercenaries by Azerbaijan.  The statement also says that Azerbaijan will be held accountable for the violations of the norms of the European Convention on Human Rights and international humanitarian law.

The RA MoD spokesperson Shushan Petrosyan reported that on November 2, at around 6:10 pm, the Azerbaijani side opened artillery fire in the direction of the positions of the Armed Forces of Armenia and the Davit Bek settlement in the RA Syunik province, as a result of which one civilian was killed and two others were wounded.

Artsakh/NK Ombudsman reported that, continuing to violate the provisions of international humanitarian law, Azerbaijan targeted a number of civilian communities and infrastructure in Artsakh/NK. Within the fact-finding mission of the Human Rights Defender, it was revealed that, on November 1, one civilian was killed in Khnushinak village of Martuni region, and 1 civilian was wounded as a result of a shell explosion in Arajadzor village of Martakert region. To date, at least 46 civilians have been killed and at least 142 civilians have been wounded by the Azerbaijani armed forces.