November 3. Azerbaijan used a new banned weapon in the direction of the peaceful population of Artsakh/NK. The weapon is intended for mass destruction and arson 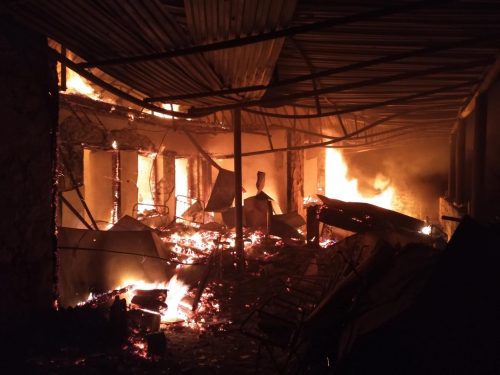 The Republic of Artsakh/NK State Service of Emergency Situations reported that the night of November 2-November 3 was generally calm. At dawn, however, the Azerbaijani armed forces resumed actions and fired in the direction of the towns of Martuni and Shushi of Artsakh/NK from Smerch MLR system. No affected civilians have been reported.

Later, the Service reported that in parallel with combat actions, the Azerbaijani armed forces continued keeping peaceful settlements under fire. During the day, the enemy forces deployed military aviation in the direction of the town of Martuni of Artsakh/NK and shelled the town of Shushi. Moreover, they used MRL system in Shahumyan region. According to the preliminary data, no one was affected.

The Armenian Unified Infocenter reported that a new type of weapon fired by the enemy forces appeared in the territory of the Republic of Artsakh/NK. The study revealed that it was a weapon with a length of about 40 cm, the use of which in the direction of the civilian population is prohibited in accordance with the Geneva and other international conventions. This weapon is intended for mass destruction and comprehensive arson.

NKR Infocenter posted photos and reported that on November 3, the Azerbaijani armed forces again shelled Shushi town of the Republic of Artsakh/NK.

The Republic of Artsakh/Nagorno Karabakh Ombudsman reported that deliberate burning of at least 1815 hectares of forests in Artsakh/NK by Azerbaijan is a war crime. In parallel with the targeting of civilian communities, the Azerbaijani armed forces, especially in recent days, have been deliberately burning the forested areas of Artsakh/NK. According to preliminary data, they mainly use banned white phosphorus weapons.

Within the framework of the fact-finding mission of the Artsakh/NK Human Rights Defender, it was revealed that the deliberate burning of the forests of Artsakh/NK by the Azerbaijani side is widespread and covers all regions. According to preliminary data, 1815 hectares of forest area have already been burnt, but fires continue in various areas, and there is a tendency for rapid growth.

Given the size and geographical coverage of the burned forests, the population of the Artsakh Republic/NK is facing an environmental catastrophe, which undermines the environmental security in the region and contains long-term dangerous consequences for the life and health of the people of Artsakh/NK. Moreover, the Azerbaijani armed forces, with these criminal methods, intend to harm the civilian population sheltered in the forests.

The Ombudsman emphasizes that the deliberate burning of the forests by the Azerbaijani armed forces is a war crime, and calls on the international community to take practical steps to condemn the Azerbaijani crimes and punish those responsible.

The Republic of Artsakh/NK Human Rights Defender Artak Beglaryan received the Member of the Parliament of Iceland and the President of the "One Free World International" human rights organization.

The Ombudsman presented the atrocities committed by the Azerbaijani armed forces against the people of Artsakh since September 27, which are accompanied by gross violations of international humanitarian law and war crimes.
Presenting the facts collected during the Ombudsman's fact-finding mission, Artak Beglaryan referred in detail to the cases of Azerbaijan targeting the civilian population and objects in Artsakh/NK, as well as persons and institutions with humanitarian functions.

The Human Rights Defender emphasized that the global human rights community should record all those crimes and take active steps to make the reality available to political decision-makers, and ensure practical responses.

The Member of the Parliament of Iceland and the President of the "One Free World International" human rights organization, stressed that the war and Azerbaijani crimes must be stopped as soon as possible, making the protection of human rights a priority. They highlighted that regardless of the status and circumstances, the people of Artsak/NKh should be under the international protection, taking into account the principle of universality of human rights.

The Human Rights Defender of Armenia posted new evidence on his Facebook page and reported that continues to obtain objective new evidence that Azeris continue illegally seizing the passwords of the Armenian war prisoners’ social networks and starting to manage those pages. Evidence shows that these social network pages or accounts are activated from the Azerbaijani IP (Internet Protocol) domain, each time accessing with different devices: computer, mobile phone, iPad.

The study shows that hatred and materials, provoking public and political enmity in Armenia and Artsakh/NK, causing tension, panic and anxiety in the society, continue to spread from these Armenian pages. These and all other materials are duly documented by the Human Rights Defender of Armenia in order to send them to relevant international bodies.